Though seldom sensational, Canada's charitable activities are essential to our civil society. Our charities provide meaning, purpose, and belonging amid the dark labyrinths of alienation that characterize our time. Researching, thinking, talking, building, and envisioning in this space is no esoteric investment, a quaint concession or a salve for the guilt of our overextension and collective greed. In this paper, we explore the deep renewal we need in our conceptions of the charitable sector—how we fund, empower, and even define our charities. 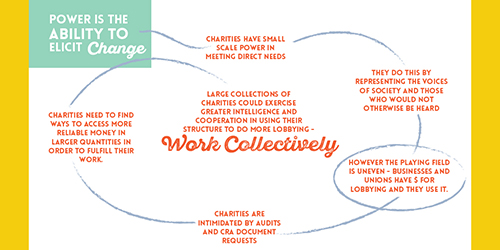 In 2016 we asked charity experts across the land this question. Now it's your turn.

If you could have a measure right now, some data or intel on charities across the country, what would that measure be?

Why Do We Study Charity?

Charitable work significantly underwrites many valuable aspects of our common life. The charitable sector is a critical part of life in Canada. In the year 2000 Canadians contributed $4.5 billion and gave over 1 billion hours of volunteer time to organizations they believed in. Through tax credits and other methods, governments have historically nurtured these activities—the heart of Canada’s charitable "third sector."

Economic recessions hit charities harder than most. Not only do many organizations experience a decline in giving, but often demands for the services many groups provide increases dramatically. Something needs to be done. To complicate things further, the portion of the population responsible for the bulk of volunteerism and financial giving is in decline. What will happen to these public-good services and support programs if nothing is done?

We are currently exploring how and when people in Canada donate, particularly the planned aspects of giving across the country. This will help us form a more complete picture of the donations dynamics in the Canadian charitable sector.

Additional Resources on Charity and the Civic Core

A brief summary of what Cardus offers to support the civic core can be found in this two-page overview.

A sample of op-eds on the civic core:

Past Research from the Civic Core

"It is incumbent on those of us who make it our business to think through such things to imagine how the 'Big Society' agenda could provide opportunity and hope within a cultural arc where both seem to be in short supply."
—Ray Pennings 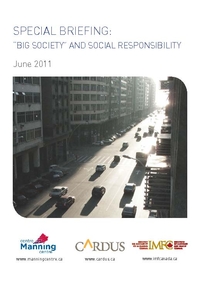 A transcription of proceedings from the Manning Centre Special Briefing, held June 10, 2011 in Ottawa. The papers served as the basis for initial presentations, followed by responses from panelists and questions from the floor. A joint project of Cardus, the Manning Centre, and the Institute of Marriage and Family Canada.