A government document reveals daycare vacancies going back to 2003

For decades now, Canadians have been hearing there is a shortage of daycare spaces. It seems that no matter the city or province, the urgent-shortage storyline remains the same.

In fact, the empirical evidence contradicts this narrative. In two jurisdictions—the City of Toronto and the province of British Columbia—daycare vacancy rates are persistent and growing.

While this finding contradicts the usual narrative, it is based on data from a publicly available Ministry of Children and Family Development Performance Management Report.2

Given the concern for evidence-based policy, high vacancy rates expose a shortage of demand rather than a shortage of supply. In British Columbia, the disparate vacancy rates among jurisdictions also indicate a need to consider how best to use allocated child care funds more efficiently. After all, “[e]fficient use of child care spaces will be reflected in high utilization rates,” the report’s authors write.3

This article first examines the data showing daycare vacancies in British Columbia. Second, we’ll examine why those vacancies exist. Finally, we’ll discuss some of the possible reasons why we hear only about a shortage, and we’ll present new policy recommendations.

The average daycare vacancy rate across British Columbia, including licensed centre-based care and family care, and across all child ages from infant through to school age, is 30.9 percent.4

It’s worth noting the term “vacancy” is not used. Instead, the Ministry of Children and Family Development presents the data in the form of “utilization rates”—the percentage of spaces used, rather than the percentage vacant. Utilization rates going back to 2003 are shown in Chart A, which is reproduced from the ministry’s report. 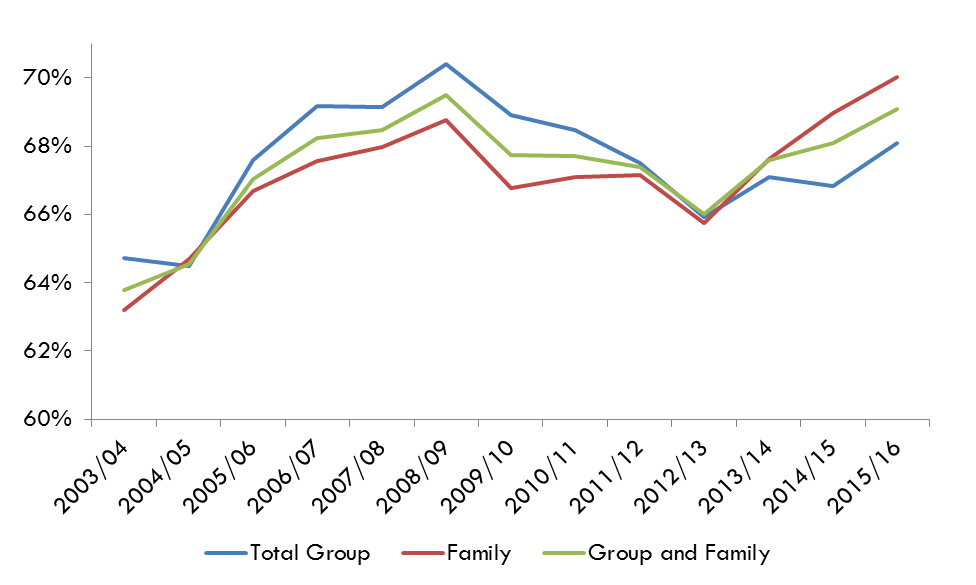 *Source: Ministry of Children and Family Development. Performance Management Report. Volume 8, March 2016, p. 15. This is taken directly from the report. Note that the utilization rates have varied over the years, but have not surpassed about 70 percent. This means at their lowest, vacancy rates were 30 percent.

Instead of utilization rates, we present vacancy rates in Chart B below by subtracting the utilization rate from 100 percent (utilized spaces + vacant spaces = 100%). The vacancy rates are actually higher because available spaces in “licence not required” home daycare and “licensed” preschool (which may provide up to four hours of care per day) are not included in the data.5

The province is divided into thirteen service delivery areas (SDAs).6 Vacancy rates across those SDAs vary. The highest vacancies are in the northeast (42.9%) and the Kootenays (45.1%).7 Put bluntly, in the Kootenays, almost half of daycare spaces are vacant.

The lowest vacancy rates are in Vancouver/Richmond at 24 percent. To emphasize the point, that means that in the area with the highest child care utilization rates, roughly a quarter of spaces are still available.

The next lowest vacancy rates are North Fraser and South Fraser at 25.2 percent and 28.7 percent respectively.

The report discusses the varying vacancy rates by community size, as well. Larger communities, such as Vancouver/Richmond, have lower vacancy rates. In communities with fewer than 10,000 people, vacancy rates are high across the board, at an average of 43.2 percent.8 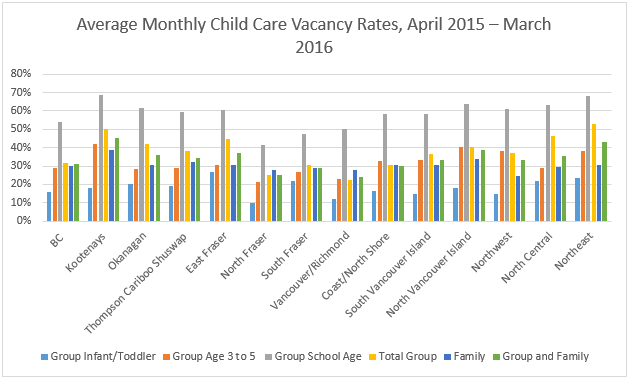 *Source: Ministry of Children and Family Development. Performance Management Report. Volume 8, March 2016, p. 17. The document shows utilization rates by service delivery area across the province, which we have converted here into vacancy rates.

The vacancy rates for school-aged children are the highest, ranging from 41.5 percent in North Fraser to 68.6 percent in the Kootenays.

A final point about daycare usage: The report indicates parents do not choose large daycares with many spaces. Since 2003, the highest vacancy rates exist in centre-based group facilities with forty or more spaces. The lowest vacancy rates in daycare centres exist in those with ten or fewer spaces.12 Family-based daycare has lower vacancies overall despite higher fee subsidies for centre-based care.13

In fact, we know that centre-based care (the type most often proposed by governments aiming to create spaces) is the least popular with parents. The first preference for child care is for children under six to be at home with a parent; however, if that is not possible, the next choice is a relative, then a neighbourhood home daycare.14

Looking at these vacancy rates, some would argue there are plenty who want to find a daycare space, but they simply do not have the money with which to do so. Here we turn to examine budgeted subsidy dollars in British Columbia. The amount budgeted for child care fee subsidies in 2016/2017 was $119 million. The amount used was $105 million in the same year.16 This amounts to $14 million in unused, but budgeted subsidy dollars.

WHY DO WE HEAR SO MUCH ABOUT THE STRESS OF FINDING CARE?

It is not our intent to say that no parent has problems with finding suitable non-parental child care across British Columbia. Problems are likely for those seeking infant care in densely populated areas, for example. Finding high quality care for any age range, given that the quality of care in the majority of licensed daycares in Canada has been found to be inadequate, could likewise be a problem.18 That said, the idea of an outright shortage is demonstrably false when looking at the evidence for every part of the province. There are other relevant policy options.

Evidence of daycare vacancies has been documented since at least 2000. A federally funded report written by some of Canada’s leading proponents of institutional daycare found that only 46.3 percent of daycare centres Canada-wide reported no vacancies, and 30.6 percent reported vacancy rates over 10 percent in 1998. The authors write: “A comparison of the number of centres with all spaces filled in 1991 (37.5%) and in 1998 (46.3%) suggests that maintaining enrollment is less of a problem than it was.” They then bluntly note, “Vacancy rates of this magnitude make it extremely difficult to sustain financial viability.”19

The City of Toronto’s child care website used to provide current data on vacancies in each centre it funds, but removed these data at some point after 2009. In 2015, “Is There Really a Daycare Shortage?” revealed that between 2009 and October 2014, the daycare vacancy rate in Toronto fluctuated from a low of 3.58 percent to a high of 6.64 percent.20

A better approach to child care would broaden its definition to include parents. Child care is the care of a child, regardless of how or where that care takes place. Governments should direct child care funding directly to parents, rather than building more spaces where they are not needed.

Funding for parents should be based on income. Higher-income families are more likely to use daycare centres than lower-income families, according to Statistics Canada. This is why higher-income families receive more child care funding. “In general, parents belonging to a higher income household were more likely to have used some form of non-parental care. More precisely, about two-thirds (65%) of parents with an annual household income of at least $100,000 used child care for their preschooler. This was nearly double the rate recorded for households with an income below $40,000 (34%),” writes the author of the Statistics Canada report.21

Thus, preferential funding for centre-based care discriminates against those who cannot or prefer not to use that form of care and creates an incentive for parents to use the subsidized care. It is important to note that only 18 percent of children aged zero to four are in daycare centres or preschools, according to Statistics Canada.22 Government must remain neutral in its approach to funding child care options.

Parents never pay the actual full costs for daycare, which are far higher than the fees, because all care in daycare centres and preschools is subsidized. The government provides funding for various operational and capital costs. Some facilities have additional subsidies, too.23 For example, the University of British Columbia provides rent-free premises and covers all janitorial and administrative costs at UBC daycare centres.

The federal child care expense deduction of $8,000 per child aged zero to seven and $5,000 for a child up to age fifteen also lowers parents’ costs. This provides up to over $3,500 per child in public funding to parents with higher taxable incomes.25

Overturning this discriminatory discrepancy requires a look at the evidence and the desire to serve all parents and children, regardless of the forms of care they use.

1. Helen Ward, “Is There Really a Daycare Shortage? A Toronto Case Study Shows Vacancies Despite Waiting Lists and Subsidies,” Institute of Marriage and Family Canada, April 2015. https://www.cardus.ca/research/family/articles/is-there-really-a-daycare-shortage/; Andrea Mrozek, “Toronto’s Increasing Daycare Surplus,” Cardus Family, April 25, 2017. https://www.cardus.ca/research/family/5057/torontos-increasing-daycare-surplus/
2. Ministry of Children and Family Development. Performance Management Report. Volume 8, March 2016. https://www2.gov.bc.ca/assets/gov/family-and-social-supports/services-supports-for-parents-with-young-children/reporting-monitoring/00-public-ministry-reports/volume_8_draftv7.pdf
3. Performance Management Report, 15.
4. Calculations based on “Group and Family” utilization rate. Ibid., 17.
5. “Licensed ‘preschool’ child care spaces have been excluded from these calculations as preschool facilities may be open on a part-time basis both with morning and/or afternoon sessions, and from one to five days per week,” Ibid., 14
6. Please check page two of the Performance Management Report to see what part of the province each service delivery area includes.
7. Calculations based on “Group and Family” utilization rate. Ibid., 17.
8. Ibid., 19.
9. Community Care and Assisted Living Act, Child Care Licensing Regulation. November 8, 2007. http://www.bclaws.ca/civix/document/id/loo96/loo96/332_2007#section2
10. Calculations based on Performance Management Report, 17.
11. Ibid.
12. Ibid., 20.
13. https://www2.gov.bc.ca/assets/gov/family-and-social-supports/child-care/subsidy_rate_table.pdf
14. “Canadian Daycare Desires,” Institute of Marriage and Family Canada, May 2013, 3. https://www.cardus.ca/research/family/articles/canadian-daycare-desires/This result holds true going back to 2005 when Reg Bibby, in conjunction with the Vanier Institute, surveyed on the same topic. “Child Care Aspirations,” Vanier Institute of the Family, February 2005. http://www.reginaldbibby.com/images/ChildCareAspirations_Feb1005.pdf
15. Performance Management Report, 20.
16. Dayna Slusar, Cardus researcher, in phone communication with Kelly Douglas from the British Columbia Ministry of Children and Family Development, November 28, 2017.
17. “Free Child Care and Preschool,” Greens of British Columbia. http://www.bcgreens.ca/child care
18. “Instead, the majority of the centres in Canada are providing care that is of minimal to mediocre quality,” Gillian Doherty, Donna Lero, Hillel Goelman, Annette LaGrange, and Jocelyne Tougas, “You Bet I Care! Caring and Learning Environments: Quality in Child Care Centres Across Canada,” Centre for Families, Work and Well-Being, University of Guelph, 2000, ix. https://www.worklifecanada.ca/cms/resources/files/4/ybic_report_2_en.pdf
19. Ibid., 167, http://www.ccsc-cssge.ca/sites/default/files/uploads/Projects-Pubs-Docs/ybic_report.pdf
20. Ward, 7.
21. Maire Sinha, “Child Care in Canada,” Ottawa: Statistics Canada, October 30, 2014, 6. http://www.statcan.gc.ca/pub/89-652-x/89-652-x2014005-eng.pdf
22. Calculations by authors based on data from Sinha, Table 1, 7. The calculation of the 18 percent is based on all children including those who are in parental care. According to the Sinha report, 54 percent of parents with children aged four and under used regulated child care (4). Sinha’s Table 1, 7 says 33 percent of children aged four and under whose parents use child care are in a daycare centre.
23. Performance Management Report, 22. This shows $210.029 million total expenditure subsidizing non-parental child care; the fee subsidy portion is only about half of the total at $109.037 million.
24. Child Care Subsidy Rate Table. Effective April 1, 2012. https://www2.gov.bc.ca/assets/gov/family-and-social-supports/child-care/subsidy_rate_table.pdf
25. Jaime Golombek, “Why 2017 May Prove to be a Taxing Year if You’ve Got Kids,” Financial Post, January 6, 2017. http://business.financialpost.com/personal-finance/taxes/why-2017-may-be-a-taxing-year-if-youve-got-kidsand Child Care Expense Deduction 2016 form, Canada Revenue Agency https://www.canada.ca/content/dam/cra-arc/migration/cra-arc/E/pbg/tf/t778/t778-16e.pdf
26. For more detail on how child care funding works, please see Ward, 5-8.https://www.cardus.ca/research/family/articles/is-there-really-a-daycare-shortage/
27. Child Care Choices. http://www.child carechoices.ca/main/Resources/54/http://www.child carechoices.ca/main/Resources/54/ The sub-categories for “licence not required” care include: “registered licence not required” care, “unregistered licence not required”, and care in a child’s own home.
28. CCALA - Child care Licensing Regulation. http://www.bclaws.ca/civix/document/id/loo96/loo96/332_2007#ScheduleE