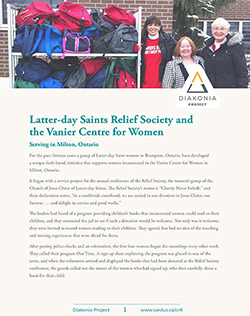 For the past thirteen years a group of Latter-day Saint women in Brampton, Ontario, have developed a unique faith-based initiative that supports women incarcerated in the Vanier Centre for Women in Milton, Ontario.

It began with a service project for the annual conference of the Relief Society, the women’s group of the Church of Jesus Christ of Latter-day Saints. The Relief Society’s motto is “Charity Never Faileth,” and their declaration states, “As a worldwide sisterhood, we are united in our devotion to Jesus Christ, our Saviour . . . and delight in service and good works.” 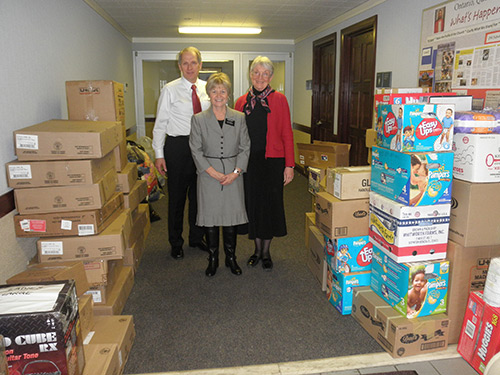 The leaders had heard of a program providing children’s books that incarcerated women could read to their children, and they contacted the jail to see if such a donation would be welcome. Not only was it welcome, they were invited to record women reading to their children. They agreed, but had no idea of the touching and moving experiences that were ahead for them.

After getting police checks and an orientation, the first four women began the recordings every other week. They called their program Our Time. A sign-up sheet explaining the program was placed in one of the units, and when the volunteers arrived and displayed the books that had been donated at the Relief Society conference, the guards called out the names of the women who had signed up, who then carefully chose a book for their child.

One of the first women who signed up said, “Is it all right if I sing to my son?” She was told to go ahead, and she began by saying, “Hon, I want you to lie down, close your eyes, and pretend I am lying there beside you.” Then she sang, “You are my sunshine, my only sunshine,” and read him the book she had chosen.

Both the book and the CD of the mother reading are sent to the child.

Many women shared how being part of the program affected them and their children.

One wrote, “It puts my soul at ease to know that I’m able to do this and send my daughter a piece of my heart and for her to know I’m okay and to hear my voice. I feel a 100 percent better. God bless you.” 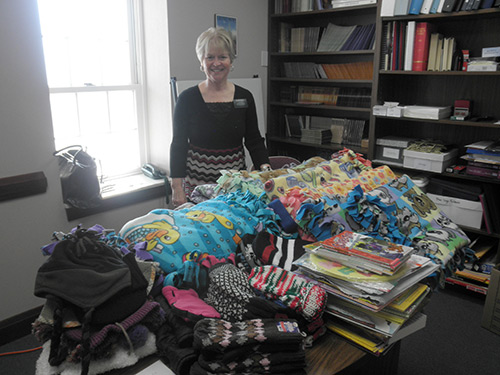 Another shared, “I received a letter from my son expressing his gratitude for reading his favourite book on CD. He listens to it every night before bed. He is nine years old and reading chapter books, and I sent him Where the Wild Things Are, his favourite book as a young child. He wanted the book read over and over when he was three and four years old. Now, as an older child with a mother in jail for over a year, he expressed his joy at being able to hear my voice whenever he wanted.”

One wrote, “I feel it is important for female inmates to keep a strong connection with their children during their incarceration. Children need their mothers and need to feel their presence regardless of the physical separation. Regardless of the reason for our incarceration, it does not take away our love for our children.”

When the program began, one of the Relief Society members who is a school teacher had her students make Christmas cards for the women at the jail. Other children in the church were asked to make more so that every woman could get one. The staff at the jail asked the volunteers to hand deliver them to each woman. One of the first women who received a card asked, “Do these kids know they are making these cards for women in jail?” “Yes,” she was told, “and they made it just for you.” She burst into sobs. Another started laughing when she read, “I hope you get out of jail soon,” and tears came when another read, “I will pray for you to be happy.”

The women who are incarcerated at the Vanier Centre can have long waits until they are tried in court. If they are released from court, they can walk out onto the street with what few belongings they have brought in a plastic garbage bag. When the volunteers heard that one newly released woman crawled into a dumpster to get an empty bottle she could fill with water, they invited all members of the church to assemble backpacks filled with basic necessities—including a bottle of water. Two members in their nineties began knitting hats and scarves and others joined them. A phone card and a gift card for Tim Hortons or McDonald’s are inserted. The backpacks are kept in a locked room at the Brampton courthouse and given to women who are released from court and have no support. Last year, 250 backpacks were donated along with winter coats for women who were arrested in the summer and released in the winter. 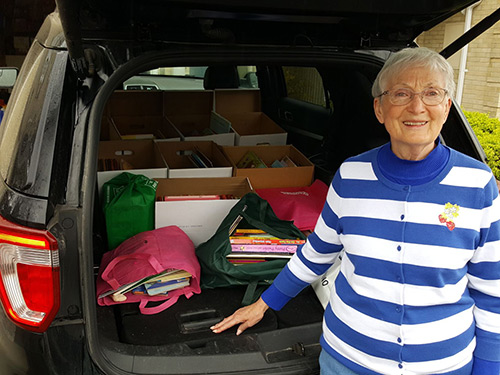 One of their members had a connection with Maya Angelou, the African American poet, and wrote asking her to send a letter of encouragement to the women at Vanier. She sent copies of all her books along with a plaque with one of her poems inspiring one woman to write to her saying, “It’s easy to feel lost and forgotten in here. At times, it’s as if you no longer matter to anyone in the world. So when someone as prominent as yourself takes the time to show such kindness, it means a great deal more than we can express.”

At Christmas every year, all the volunteers bring home baking and meet with the women who have recorded. They sing Christmas songs together and the CD of the singing is sent to their children along with a Christmas card the mother makes.

The program that started with four volunteers now has sixteen who go to the jail every week. Each of them feels it is an honour and privilege to serve. One volunteer said, “We believe that we are all children of a Heavenly Father who loves us. Our Saviour, Jesus Christ, has set the example of service to others. The women who are in Vanier are our sisters. We do not judge them, but try to let them know that they are loved.”

In every backpack there is a note saying,

This backpack was made especially for you by members of The Church of Jesus Christ of Latter-day Saints. “Put your trust in God, and move forward with faith and confidence in the future.” Soon—when all is well—you are going to look back on this period of your life and be so glad that you never gave up!