Internal City of Toronto documents access through a Freedom of Information request indicate that the city’s centre-based daycare vacancy rates increased between 2009 and 2017. In fact, between 2009 and 2017, average daycare vacancies jumped 89 per cent. In removing 2017 from consideration because we only have data for the first three months, there is still a 45 per cent increase in the average number of vacant spaces between 2009 and 2016. This means that right now in Toronto, an average of over 4,500 daycare spaces lie empty. In short, Toronto has a daycare surplus.

This fact is little publicized, most likely because it would detract from the expansive vision for child care the City of Toronto recently put forward, which includes building 30,000 more spaces over the next decade. The funding requirements for the new vision run into the billions, 80 per cent of which the City of Toronto expects the provincial and the federal governments to cover.

The City of Toronto recently released Toronto’s Licensed Child Care Growth Strategy For Children Under 4, 2017-2026. The report includes plans to increase child care spaces by 30,000 and reduce parent fees by 25 to 40 per cent.1 The largest amount of money requested is for capital development, to build 30,000 more spaces. Their goal is to have subsidized centre-based spaces for 50 per cent of Toronto’s child population by 2026.

The report estimates the following funding needs for the City of Toronto and further, “assume[s] that combined, provincial and federal contributions will fund 80 per cent of these costs.” This means the City of Toronto is expecting the rest of the province and country to assume the lion’s share of their plan, which includes:

In total, the City of Toronto child care plan costs anywhere between $1.9 billion and $2.6 billion.

For taxpayers at the provincial and the federal level to provide 80 per cent of the funding at the low end, the price tag is $1.5 billion dollars. At the high end, provincial and federal taxpayer subsidies would come to $2.1 billion.

By contrast, the federal government just allocated $7 billion over ten years for childcare for the country.

The “need” for new spaces is based on a 2016 report called the Licensed Child Care Demand and Affordability Study by economists Gordon Cleveland and Michael Krashinsky.2 The economists find that the City would have to substantially subsidize (make the cost of daycare cheaper) before parents will increase their use. As quoted in the City of Toronto report: “In the modeling, as parent fees decreased, demand increased. However, fees would have to be reduced by at least 25% before it had a significant impact on demand – that is before a substantial number of new families would choose licensed care.”3

High taxpayer subsidies are necessary to get Toronto parents to choose to use the spaces already available. When those subsidies are high enough, more spaces will then be required to meet the newfound increased “demand.” Actively encouraging demand is a distortion, which masks actual demand for centre-based daycare spaces. 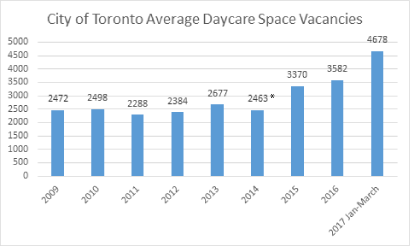 Source: City of Toronto response to Access to Information request for 2015-2017 vacancy rates on April 5, 2017 and Helen Ward “Is There Really a Daycare Shortage?” Institute of Marriage and Family Canada, (April 2015): 4.

*In 2014, space vacancies were missing for November and December. In calculating the average monthly vacancies, the lowest vacancy rate in 2014 (1905) was used to calculate the average annual vacancy rate.

Why Does Toronto Have a Daycare Surplus?

The City of Toronto offers the following reasons:

Adding to this, vacancy rates reflect the inability of government to quickly respond to local needs. If someone is waiting for care in the west end of Toronto, a space in the east end won’t help.

Importantly, the City of Toronto never considers that demand for this type of care is actually low.

Research shows that centre-based spaces are the least preferred by parents. It may be that vacancies exist because parents don’t want to use that type of space.

What do Parents Say They Want?

A 2013 poll shows most parents would prefer that a parent be able to stay home with a child under six, but that when this isn’t possible, their next choices in order of preference are a relative, a neighbourhood home daycare and only then a not-for profit daycare.7 Only 19% of Ontarians prefer the type of care the City of Toronto is offering for children under six, which is centre-based care.8

So why do we hear so much about the stress of finding care, particularly in Toronto?

It is not the intent of this report to say that there are no problems with finding suitable childcare in Toronto. The main point is to say that in spite of funding and spaces, the City of Toronto has been unable to meet parents’ needs where they are, yet it is still trying to expand an already ill-functioning space provision system. Besides this, however, care is required in consideration of daycare waiting lists. They are notoriously inaccurate, with parents joining multiple wait lists before their child is even born.9 This creates a feeling of panic that is very real, but may or may not result in a lack of care when the time comes.

Rather than building more spaces, a more targeted approach would be to direct subsidies to families in need so that they can use the spaces available.

The City of Toronto estimates an average cost of $9357 per subsidy, which, were the average 2017 vacant daycare spaces filled, would cost $43 772 046. Just shy of $44 million dollars is substantially more affordable than the billions requested.

A policy response that is based on parental desires would be to offer funding to parents regardless of the form of child care they choose to use. Funding for centre-based care discriminates against those who prefer not to use that form of care and incentivizes parents to use the subsidized care. Government should remain neutral in their approach to funding child care options.