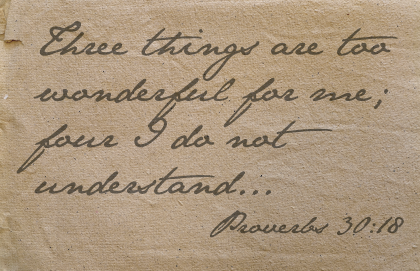 Agur and the American Election

The issues that plagued last year's American election were not new. Here, the anonymous Agur helps us to a sober retrospective on the election through the book of Proverbs.

There are three things in this year's election that I do not understand; four that are too difficult for me: a man asleep in a debate, binders full of women, swing states, and the Electoral College.

This is a modern paraphrase of one of five numerical wisdom sayings in Proverbs 30, a chapter ascribed to Agur. In the ancient world, wisdom writings were generally associated with royalty—kings and their courts of sages and scribes. The book of Proverbs is thus appropriately ascribed to Solomon (1:1), Israel's token wise politician (1 Kings 3-10). King Hezekiah (25:1) and King Lemuel's queen mother (31:1) are also cited as contributing authors with unambiguous royal connections. But not so with Agur: unlike the three royal authors in Proverbs, we really have no idea who he was.

But we do have some clues as to why he was included. Read sequentially, the sayings in chapters 1 to 30 grow increasingly difficult, both in the complexity of their metaphors and the ambiguity and even offensiveness of their content. One does not find anything like "a dog that returns to its vomit" (26:11) or an adulteress who "eats and wipes her mouth, and says, 'I have done no wrong'" (30:20) in the prologue of chapters 1-9 or among the elementary sayings of chapters 10-15. Studious readers of Proverbs discover that progress through the book parallels progress in the study of wisdom: the more we learn, the more we appreciate the enigmatic nature of life in this world and the need for yet more wisdom.

Enter the anonymous Agur who, conspicuously lacking royal status, produces an exquisite poem full of political satire and unconventional wisdom. It seems the perfect text to shed light on a perplexing American election. Here are four (or five) things he has to say.

No stately form or majesty

Just after these opening words, Agur presents a long list of wisdom sayings, so his inability to find wisdom seems contradictory at first. It's more likely, however, that Agur's statement is rhetorical and in some way connected to his obscure identity. That is to say, not only is Agur noticeably inferior to his royal coauthors, but his tone of caution intentionally reverses the confidence in Solomon's introduction to find wisdom and the knowledge of God (1:7 and 9:10). Agur comes to represent an anti-type of the famous wise kings of Israel, like Israel's suffering servant or Bilbo Baggins among the kings of Wilderland. His humility and anonymity satirize the supposed wise leaders of Israel's past who led them into ruin and exile.

Modern politicians today play the role of Solomon and his successors, using religion to advance their positions rather than submitting to it in reverence. In fact, to the degree that the American political system as a whole fosters beauty, pride, and self-confidence in our candidates, it surrenders politics to expert marketers and ensconces the cultural worship of the artificial image.

But in its wake, the system leaves a vacuum with no leaders to teach and model humility, confession, repentance, and service. As I write, the political in-fighting over the fiscal cliff, taxation, and gun-control underscores how habitual and deeply rooted pride is in our culture. Agur stands as a reminder in every generation that true leaders come to serve, not to be served.

The discipline of wonder

The poetry of the Old Testament instills in us a natural sense of wonder, and yet Agur may be the only author who explicitly teaches wonder as a discipline. The numerical lists he builds were a common way of teaching the search for order amidst the complexities of life. Groups of things that do not appear to be related are connected by way of some surprising similarity that surpasses our comprehension.

Such wonder involves far more than conceding to the existence of unanswered questions in life; it is a conscious discipline of attending closely to our place at the "fringe of vast, divine mysteries"—in the words of Gerhard von Rad—where we move constantly between the inexplicable and explicable, between the depths of darkness and light, and between our grasp of meaning and the absence of meaning.

The modern, scientific worldview instinctively resists such religiously oriented wonder, which only increases the pressure in our strained political climate. Notice how casually we reduce our national problems to simple slogans and two-sided dilemmas: Are you a democrat or a republican? For tax cuts or against them? With me or against me? As if these were the only options available.

Wonder works on a totally different wavelength, acknowledging rather than hiding from human limitations. In the place of speed and efficiency it encourages imagination. In place of power, compassion. In place of discord, harmony. And in place of control, cooperation. How different our governments would function if nurtured by wonder.

Presidents who never tell a lie

I often wonder if American children still hear the fable of George Washington as a boy, confessing to having cut down a cherry tree—a story meant to inculcate the virtue of honesty in our nation's youth. Agur provides the only prayer in the whole book of Proverbs, and half of his six requests ask God to keep him from lying and deceit.

Contrast that with the manipulation of statistics and half-truths of political rhetoric in recent years. When candidates got caught bending the facts or selectively using statistics to their advantage, their automatic morning-after strategy was to spin the story again in a different direction, adding increasing layers of deception. It became a daily part of morning news shows this year to replay the voices of confused and exasperated voters who wanted to know who was right. And the fact-checkers who came to their aid were not always, if ever, impartial. It is sad to admit that America may have nearly perfected the art of the disguising falsehood in the garb of truthfulness. Agur's dying request to be kept from lying begs us to ask ourselves how it is that we have so come to fear the practice of honesty.

Take only what you need

The second half of Agur's prayer asks to be kept from coveting and to finish life in moderation, neither too rich nor too poor. America has firmly planted its value system in the fields of freedom, rights, and choice, but it has done so at the cost of virtues like responsibility, community, and contentment. The question about who is going to get their share eclipses ones like who can manage with a little less or who could give a little more.

In a New York Times op-ed this fall, Frank Bruni rightly chastised both parties for failing to address our financial situation seriously and abandoning the most important words of the WWII generation, "sacrifice." "These days" he said, "sacrifice is what you recommend for others, not what you volunteer for yourself."

Agur's revisits the theme of coveting in verse 15: "The leech has two daughters, 'give' and 'give.'" The metaphor of the leech grotesquely evokes the insatiability of human desire that, left unchecked, inevitably gives way to violent greed. The fact that elections have come to be characterized primarily in economic terms forces us to ask whether we are at all unlike the leech. Life, once reduced to gratifying base desires and individual rights, becomes a battle to the death of our mother, our sister, and our neighbour. Better to sacrifice and cultivate contentment, Agur says.

"Three things on the earth are small, yet exceedingly wise:
ants have little strength, yet they store up their food in harvest;
rock badgers have little might, yet they make their home in the crags;
locusts have no king, yet they advance in ranks;
a lizard can be grasped in the hand, yet is found in kings palaces." (30:24-28)

I said above that Agur sets himself against Solomon, but not as a critique of the historical figure. His oracle aims to reorient our focus away from so-called famous or wise kings who notoriously fail to live up to their potential, and back onto ourselves and our personal responsibility to be wise in little things. Perhaps the worst reflex habit of the American population has been our eagerness to cast all of our problems onto a gridlocked political system and its media-made figureheads, rather than working in wisdom to address the problems that are right in front of us. Agur's list of small creatures reminds us not to underestimate the power of diligence and teamwork among the small communities and churches of America, even when there is no leader to be found.

Like many little corners of the Old Testament, Agur's oracle is too often overlooked. Coming at the end of Solomon's sayings, it provides a final warning against an obsession with kings and with ever thinking we are wise; it reminds us of our individual responsibility in the world regardless of political structures around us; and it teaches that wisdom should lead us not just to think and plan, but to pray, work, and wonder.

Proverbs is kind enough not to end with this bewildering oracle, but instead concludes with the eschatological poem of the valiant Wise Woman in Proverbs 31. Her ambition, vision, generosity, and faith in God embody in perfect form the life Agur wants us to live. Together the two poems reassure us that our struggles in life and our hopes for the world, as individuals and nations, are common to all people in every age. 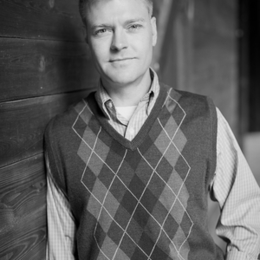 Ryan O'Dowd is Senior Visiting Lecturer at Cornell University where he also serves on the board of Chesterton House Christian study center. He is the former chair of the Scripture and Hermeneutics Seminar (SAHS) and has taught biblical studies, religion, and social justice at Briercrest College, Redeemer University College, and the Paideia Centre for Public Theology. His books include The Wisdom of Torah: Epistemology in Deuteronomy and the Wisdom Literature (Vandenhoeck and Ruprecht, 2009) and, with Craig Bartholomew, Old Testament Wisdom Literature: A Theological Introduction (InterVarsity, 2011). He and his wife Amy have four children and live in Ithaca, N.Y., where, in addition to his work teaching at Cornell, he is the pastor of Bread of Life Anglican Church (www.breadoflifeithaca.org).