Already Not Yet Again 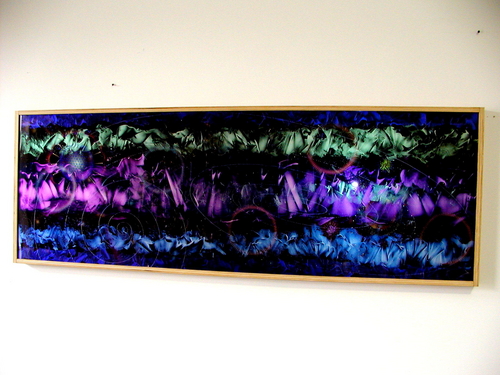 ALREADY NOT YET AGAIN (2009) and the prophetic aesthetic

The challenge is to present/implement something in the material realm that represents the dynamic of the revealed spiritual dimension.

The hearts eyes must be opened to perceive once done the process of translation is required to make evident the imagery of the spirit. That imagery is infinite. Yet it has character (dreams/visions/forms/colors) and therefore can be described (revealed).

A subtext of this is the immediate revelation of personal spiritual discourse, which is the means of the Lords personal communication with each of us as unique individuals.

How do you know what you see, How do you see what you know? Was my question 39 years ago? These questions have answers, not "an answer". Life in the Spirit (paracletos) overthrows the redundancy of religious expression!

So you get a choice, you can make redundant religious art or you can make a spiritually dynamic free expression, not by course but by revelation; you can be inspired or you can be in-fired. It's the same matter as the "tree choice" there is the Tree of Life and the Tree of the Knowledge of Good and Evil. Desire realized the fruit of the first, religious practice the second.

All of this involves time, a condition of our existence, so how much time will we spend paying attention to time? We are exhorted to be mindful of the present, as our condition can quickly (it usually does) change. Each moment is life bundled in time, something recent can be forty years on by dead reckoning, Its not how fast can I make it as much as what will it take to make it complete.

I have worked often over extended periods on very small things while doing large scale in hours or days or just moments for others. Much of the result can be almost impossible to record accurately in another media such as photos. However, a record needs to be kept. Video may prove a better account keeper, allowing multiple detail views in the motion of real time (eh?).

My material concerns are no less critical than the aesthetic quest.

Most of what I do as painting is a process, multiple layers of light dependent pigments solidified in a illusion of contained space, that's the point of beginning. The process expands the whole in many directions as well as materials. Plastics, glass, metals, woods, papers and all of the synthetic possibilities have and will be used to accomplish the visual result desired. Using these materials implies the present-ness of their making, with possible cross-references to other periods as well, yet the emphasis will always carry the imprints of current time.

My ventures in recent times has been to work in the area of reflection and transmission by using iridescent and metallic pigments as well as transparencies over and upon rigid and /or transparent panels. This use of color is easily carried over to the surface of specific objects, many of which hang on a wall surface in the manner of a painting. Variants of the process itself are also well considered, front to back, back to front, depending on the opaque or transparent nature of the material that is going to carry the imagery, there is no limit to the number of layers or for that matter colors that might be employed.

Color carries more than half of the whole composition, and remains my largest area of consideration. We are limited to a very narrow slice of the spectrum, visible light from a Yellow DG-2 Dwarf star. So, we get a choice of seven to eight colors of divided light, red to violet gives us six but as we look at the end of violet we can see blue/violet and red/violet, the extra two. The carryover to the realm of earth pigments adds nothing to the mix; it still remains within the spectral six.

Over the centuries many color theories and so called "wheels" have been invented, up to the present where we have computer screens claiming 16 million colors. None the less they are still within the parental range of the spectrum of six to eight, or the light basics of red, green, blue.

So our actual choice remains inside that limit which can then be divided by the system of values in tints to tones via addition of white or black. Additional possibilities do exist in the use of phosphorescent and the new synthetic color-shift pigments. Even so the actual color choice remains unchanged in the parent set of the visible spectrum.

Artists seem well blessed with the gift of the prophetic, which has been fairly demonstrated by Leonard Shlain in his book Art & Physics, Parallel visions in Space, Time & Light (1991). He has said: "The artist, with little or no awareness of what is going on in the field of physics, manages to conjure up images & metaphors that are strikingly appropriate when superimposed upon the conceptual framework of the physicist's later revisions of our ideas about physical reality." This area, the door of which Shlain had the courage to open with the publication of his book, has yet more to be revealed. Indeed, what is currently evident is that since the passing of Einstein and the on going quest for a theory of unification, art itself has remained fractured and only recently has the voice of the prophetic been speaking in regard to a "unity of purpose" while a new aesthetic begins to form. Hazak, Hazak © Greg Card June, 2009 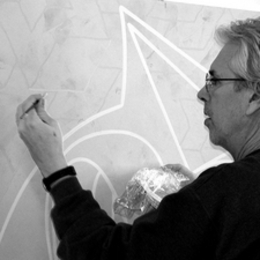 Greg Card has been involved in the studio production of art for over forty years. Many examples of his work have been exhibited in the U.S. and Europe. His focus in recent years has been on painting and the expansive use of colour on contemporary materials such as various plastics, tyvek, vinyls and metals. 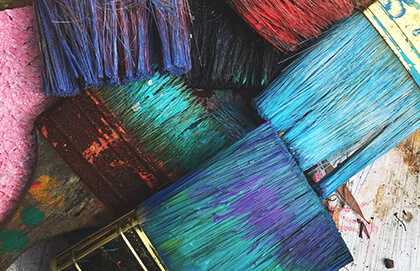 A flawed but useful case for modest consensus.