While too benevolent, and even-handed to a fault, Ross Douthat's Bad Religion offers diagnosis and prescriptions for American Christianity that are spot on. 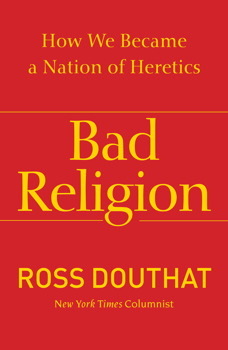 Bad Religion: How We Became a Nation of HereticsRoss Douthat. Free Press, 2012. 352 pp.


The United States of America has seen better days. The economic flu of the 2008 sub-prime mortgage crisis seems to be hanging on more tenaciously than most of us expected it would. Healthy finances elude the government of the world's richest country and hyper-partisan bickering lends an increasingly apocalyptic tone to politics in Washington. Foreign conflicts still exact their daily price in gold and human lives.

Americans, perceptively enough, have often invoked religion as part of their explanation for this set of crises as well as for crises past. The religious right has tended to blame America's problems on the decline of religion: since the 1960s, the decline in church attendance and Christian belief, and especially the abandonment of traditional Christian sexual morality, has unleashed destructive forces that will lead to the breakdown of American civilization itself unless they are checked by a return to God. The secular left, on the other hand, has tended to blame America's problems on too much religion: it's the credulous Red State attachment to an irrational worldview that has led America into foolish wars abroad and harmful, inequitable policies at home. In this view, religion needs to stay in the Dark Ages so America can properly join modernity.

In his new book, Ross Douthat, columnist for the New York Times, claims that both of these explanations are partly wrong and partly right. America's problem isn't too much or too little religion in general, it's too much of the wrong kind of religion (various pseudo-Christian heresies) and too little of the right kind of religion (mainstream, orthodox Christianity). Drawing broadly on the research of an impressive array of historians and sociologists of American religion, such as Christian Smith, James Davison Hunter, Rodney Stark, and Roger Finke, Douthat carefully and sure-footedly builds an alternative story to those offered by the religious right and the secular left.

This story begins with a resurgence of orthodox Christianity at mid-century, across all four major American religious traditions: Catholicism, mainline Protestantism, Evangelicalism, and African-American Christianity. While Douthat wisely acknowledges that no age is truly golden, he marshals impressive evidence that American Christianity of the 1940s and 1950s was organizationally robust and culturally influential. Christians from all four camps, Douthat argues, were forging strong bonds of cooperation and exerting a stable, centrist, and non-partisan influence on American culture and politics, trends which culminated in the success of the civil rights movement.

But something went wrong in the 1960s. Churches were swept up in partisan politics and many, especially mainline Protestants and Catholics, lost committed adherents. The stable, orthodox centre evaporated in the heat of a new era of controversy and extremism, with church leader after church leader falling into either blithe accommodation to cultural trends or suspicion and paranoid reactionism.

In the place of the orthodox consensus sprang up three major heresies. First, the Gnostic-esque "God Within" theology of Oprah, The Secret, and Deepak Chopra turns Jesus into a sort of eastern guru, whose main message is to follow the divine impulses of your heart (even if this means committing adultery, abandoning your children, and making up your own religion). Second, the prosperity theology of Joel Osteen, Creflo Dollar, and their ilk reduces Jesus to a good investment decision; although they are (sometimes) more sophisticated than an earlier generation of prosperity preachers, these theologians still uphold Christian faith primarily as a route to personal fulfillment, and yes, financial blessing. Finally, a gospel of American nationalism has become entrenched in different partisan forms on the left and the right, borrowing from Christian imagery for its bipolar swings from manic messianism to grim apocalypticism (depending on which party controls the White House). Douthat convincingly shows that in the absence of a robust Christian orthodoxy, all of these false Christianities have established their hold on millions of Americans, inflicting attendant horrors on the nation's balance sheets, politics, and families.

To this historian, it's clear that Douthat has done his homework. The main outline of his historical narrative accurately captures the postwar boom-1960s bust that is the story of American religion (and Canadian religion too, incidentally). He treads carefully, and he expertly anticipates possible objections to his argument. His portrait of the American heresies and their influence is not only convincing, but downright chilling. His theological critiques of these heresies, while clearly shaped by his Catholic sensibilities, usually stay close enough to "mere orthodoxy" that most Protestant readers will find themselves nodding in agreement. (His devastating deconstruction of liberal scholars' search for the historical Jesus alone makes the book a worthwhile read.)

At times, however, Douthat's benevolent instincts lead him to conclusions that are less than sound. First, Douthat is even-handed to a fault, understandably trying to avoid partisanship and the alienation of readers from various backgrounds. This does lead him astray occasionally, however, most evidently in an attempt at a balanced treatment of Evangelicalism and mainline Protestantism which results in him being too hard on the Evangelicals and too easy on the mainliners. For example, he is too quick to imply that fundamentalism and liberal Protestantism are equally heretical options (presumably because of the former's eschatological preoccupation and strict biblical interpretation), but this flies in the face of his own definition of orthodoxy as the consensus of the early Church on foundational issues. Fundamentalists, after all, are those who regard the Trinity, the Virgin Birth, the Resurrection, and so on as "fundamentals" not to be trifled with, something that cannot be said for the John Pikes and Shelby Spongs of the world. In reality, throughout the twentieth century it was easier to find Evangelical leaders than mainline Protestant leaders who could fit Douthat's standard of orthodoxy, and the wholesale accommodation and collapse of the mainline beginning in the 1960s did more damage to the health of American Christianity than deviations at the Evangelical fringes ever could. These important truths do not come through clearly enough in the book.

Second, Douthat's explanation of the decline of the 1960s and 1970s is too easy on the American cultural establishment. He is right to identify a variety of factors—from political divisions to the sexual revolution to economic affluence—as important in understanding that decline, and he notes that it was the American upper class more than any other segment of American society that ultimately turned its back on orthodox Christianity in those decades. The reader is left thinking that this shift was simply the consequence of church decline. But what if, as is more likely, elite hostility to Christianity was part of the cause of church decline in the 1960s? What if the centralization of cultural formation in institutions, such as colleges (with increased enrolment rates) and the mass media (with increased television ownership) controlled by a largely secular elite helped promote secularism in the 1960s? Douthat gives tantalizing hints of evidence that it might be so (such as the correlation between college education and unbelief in that decade), but he does not pursue this line of thinking.

These criticisms should not obscure the insight of Douthat's diagnosis, however. Neither, emphatically, should they eclipse the wisdom of his prescriptions for American Christianity. Douthat calls on the churches to steer clear of partisan captivity in their political engagement, to preach and exemplify a holistic morality, to hold up beauty and holiness as a light for the world, and to cooperate without losing their confessional commitment to the orthodoxies of their own various traditions. All of these pieces of advice ring true, but it is the last one which looms largest in light of the importance of Christian orthodoxy throughout the history recounted by the book.

Here the story of the Southern Baptist Convention (SBC), though not much discussed by Douthat, is particularly instructive for American Protestants. Unlike most large Protestant denominations, the SBC was able to reverse its slide into accommodationist liberalism due to the tenacious work of a few leaders and the support of the orthodox faithful in the pews. Today, SBC leaders and seminaries are at the centre of a resurgence of biblical, Reformed orthodoxy within American Evangelicalism that far transcends the SBC itself and includes figures as diverse as Mark Driscoll, John Piper, and Tim Keller. American Protestantism needs more of this kind of biblically and historically rooted orthodoxy.

In fact, Keller is singled out by Douthat as a positive example of socially and ecumenically engaged but orthodox and confessional Protestantism. It is perhaps no coincidence that Keller and his church, Redeemer Presbyterian in New York, represent the intersection of two streams in North American Protestantism: resurgent biblical orthodoxy a la SBC, and the neo-Calvinist "all of life redeemed" vision familiar to readers of Comment.

To the extent that American Protestants can mingle these streams, holding tenaciously to biblical orthodoxy, eschewing all pseudo-Christianities, but also turning that vision outward to the whole cosmos in all its richness, they will do their part to end the present age of American heresy and lead the country in a direction more favourable to true human flourishing. 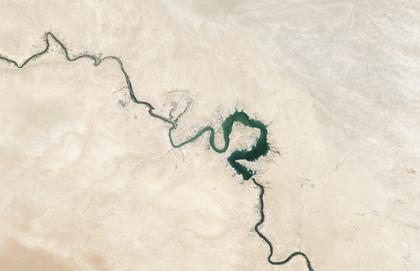 What Kind of Turning Point?

History is an unpredictable thing. Respect it.

Serve the margins, but don't abandon the centre