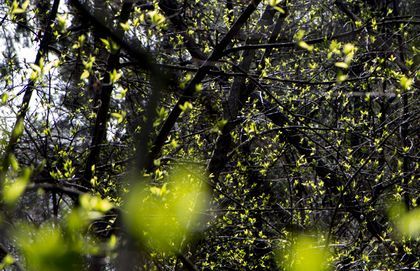 A contemporary Canadian poet has a radical take on the cross, because he is a carpenter who pays close attention to city trees.

It's almost impossible not to notice trees around Easter. Spring: over every treed street, along every alleyway, and in every garden hedgerow there are buds of pale green and gold and purple and brown and russet and silver preparing to burst forth; we are wholly into the season of new life. And after all, there is a tree at the centre of the story of Easter—and that tree too figures forth new life out of death. In the oldest English poetry, the cross-tree was called the "rood," which, a little like the present-day "rod," implied its nature as both a staff of authority and an instrument of pain. How to capture the ruggedness of the old cross, the starkness of its pain and the completeness of its victory, with an immediacy of imagination for the twenty-first century? One contemporary Canadian poet has a radical (startling, but also, as etymologically, "rooted") take on this, because he is a carpenter who pays close attention to city trees.

In a series of fourteen poems called "This Orchard Sound," John Terpstra describes an experience of cutting down and crafting a tree into a cross. The poems, he says in his notes, were written for Good Friday, and the sequence "is based, roughly, on the Fourteen Stations of the Cross." Terpstra worships at St Cuthbert's in West Hamilton, a Presbyterian church with a special concern to honour the arts. Like "This Orchard Sound," many of Terpstra's poems in The Church Not Made With Hands (1997) were written for occasions in the church year, with an awareness of the ancient liturgies that many Protestant churches have lost but are now looking to rediscover. But what is particularly riveting (nailed, perhaps, as in "he nailed it that time") in this particular group of poems has to do with where Terpstra finds the tree, and how he relates to it through the story of Jesus' betrayal and crucifixion.

For starters, this tree is in an abandoned orchard between two major highways, "in an area zoned for the light industry, / fitness clubs, insurance offices, restaurants / and parking lots that are slowly filling in."

For the trees here are indeed "damned": "Signatures had kissed the bottom line," and the orchard has been subjected to "the dozer / grumbling still, at the turned earth, / a yellow god, // insatiable of sacrifice." The plot is ready for "FUTURE DEVELOPMENT," says the sign. But the "testimony" of the apples and the "witness" of the plums is still "delicious! / Not of this world. // I find / no fault / in these trees." If they seem to "speak," to "whisper," even though common sense says "Trees / don't talk," the poet finds himself asking, "What's truth?" And he sees in the abused trees a pain that reflects a greater story:

This, in full view of "the glazed eyes of office buildings" and the mocking "yukyukyuk" of throbbing cars.

It's at this point, midway through the series of poems, that Terpstra writes "Admission time." Because he comes to "this ancient, / ongoing episode // participant / not free. Mercenary," having been given a "great commission" in which money has changed hands, and needing then to find "a shape // to hang on." He doesn't yet really know what lies ahead. And he soon finds that "jeepers! I had no idea / how heavy the thing would be, / and once the unwanted limbs / were sawn away, the ground / was a thicket of antler-work, / and I had to drag the unwieldy weight / through twigs and suckers snapping back / at me" to the car. "But killing time does pass, / and the deed is done." "For whose sake // is it / that the great garden of the earth / is torn?" This is the question to which the end of the poem will give us the answer. But meanwhile, as the tree was felled, the birds and small animals fled from the poet; he does not yet know where he himself can flee for refuge from his guilt, his complicity in this destruction.

So he takes the tree home, and preps it to fulfill his commission, forcing off the bark with a screwdriver, propping it outside "cleaned, and naked" till it will be "dry / like bone":

Is it possible, he asks, that the trees themselves cry out to each other when they are wounded? He quotes a physicist whose work suggests that it is true. He cites his own anxiety when his kids want to know the story of what he's done at work today: "What I did today / anno domini // bears repeating?" Indeed, it does. Every Lent, every Good Friday, every Easter.

"Come, see the place. // Roll away / the parking lot. Uncover earth / beneath the asphalt, and below its surface / find the dried tendrils of uprooted / Bartlett. Bosc. Kiefer. Friends. / It isn't here." How ironical, he muses, that we eat foreign fruit and drink foreign wine, when "a ripe grove grew / where the car now leaks water from its rad." And he himself must go back to "the relic of an orchard" for more branches, as he plays his craftsman's part in how "to remember an event yet to take place, / that always takes place, this place, / the only kind that is, my place." This time the crass destruction of the felled trees, still budded and trying to bloom even in their mutilation, makes his spirit cry out "Who hath wounded thee?" And suddenly:

In his notes Terpstra tells us that this "outburst" and the birds' response is "paraphrased from Oscar Wilde's The Selfish Giant," where at the very end of the story the wounded Christ child welcomes the forgiven Giant into Paradise. Thus the tree that the poet-carpenter has felled becomes the image of our salvation in Christ; the wounds are the necessary wounds of God's love for His whole creation, and He always already knows how complicit we are, and will be, in the wounding.

Terpstra tells us not only that "the orchard grew on the south side of Harvester Road, just east of Guelph Line, in Burlington, Ontario," but also that "the cross-tree hangs at St. Cuthbert's." His first gift is to write poetry that makes us feel the destruction of a fruitful orchard for urban expansion as a desecration of innocence in which he—and all of us—are complicit. But his greatest gift is to awaken us afresh to the wounds of love. If you live anywhere near Burlington, "come, see the place." If you are anywhere near Hamilton, Ontario in this Easter season, find the cross-tree in St Cuthbert's. Remember John Terpstra's story. And be thankful.

Your favourite uncle, the one that shocks your parents

How to honour dead poets: P.K. Page and the "glosa" form