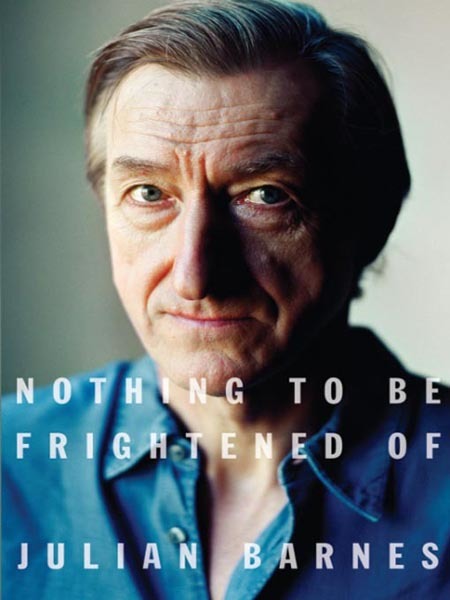 Nothing to Be Frightened Ofby Julian Barnes. New York: Knopf, 2008.


"I don't believe in God, but I miss Him." This is how Julian Barnes begins his latest non-fiction book on death entitled Nothing to Be Frightened Of. The work—a mixture of memoir, meditation, and meanderings in French literature and philosophy on the subject of death—is both humorous and serious, at times light-hearted but most often sad and melancholy. Funny or sad, it is Barnes' brilliant prose and his skill as a satirist that makes this book a wonderfully engaging read.

Barnes writes, "Missing God is focused for me by missing the underlying sense of purpose and belief when confronted with religious art" (53). Barnes writes of his frequent visits to cathedrals for architectural reasons, rather than religious ones, or "to get a sense of what Englishness once was." In this same vein, he writes, "Missing God is for me rather like Being English: a feeling roused mainly by attack. When my country is abused, a dormant, not to say narcoleptic, patriotism stirs. And when it comes to God, I find myself more provoked by atheistic absolutism than by, say, the often bland tentative hopefulness of the Church of England" (77). It is this disarming honesty that makes this book quite different from much of Barnes' other work, mainly satirical novels like England, England or A History of the World in 10 Â½ Chapters.

Though Barnes envies the sense of purpose that belief generates, he still admits to being unable and unwilling to extricate himself from his decades-old agnosticism. Early on he writes of his conversion from atheism (a staunch belief in the fact that there is no God) to agnosticism (what Barnes seems to describe as a reverence for ignorance): "If I called myself an atheist at twenty, and an agnostic at fifty and sixty, it isn't because I have acquired more knowledge in the meantime: just more awareness of ignorance" (22).

Throughout the course of the book, Barnes is by turns serious and sarcastic, gently provocative and caustically forthright. His most biting irony is not applied to his discussions of Christianity but to his encounters with bombastic atheism. But Christianity does not escape his probing discussion. In particular, he attacks the popular notion of having one's own personal idea of God as "grotesque."

However, Barnes' main argument with Christianity concerns what he perceives to be its contempt for embodied, temporal life, which, for an agnostic, is all that exists, since there is neither heaven nor hell. As far as Barnes understands Christianity, Christians would consider the desire for "terrestrial immortality . . . an impertinence" (60).

What Barnes describes as typically Christian is certainly common among Christians, but it is a kind of Christianity that fails to acknowledge what the Bible teaches about the essential goodness of creation and embodied life on this earth. From the perspective of a soundly biblical worldview, to desire terrestrial immortality is not to be impertinent. Rather, that desire is in harmony with what Christ commanded us to pray: "Your Kingdom come and your will be done, on earth as it is in heaven."

What is most moving in Barnes's writing is his love for this earth and life on it, as humdrum as both may be most of the time. It is, I think, this love of life that makes his fear of death as consuming as it appears throughout the book. He knows without a doubt that his life will end—"I'm afraid the mortality rate remains at 100 per cent," he quips—as surely as every author will someday have one last reader. Fortunately, for Christians, our last reader is not someone who is going to die as we all are; Christ has already died and risen again. The book of life is never really ended but opened anew through redemption that is as much for this world as the one to come.

In the end, Barnes seems to conclude that without the Christian story there is little or no hope when faced with death's finality. The closest thing Barnes has to hope is humor, and he definitely approaches his mortifying subject with plenty of that. But the laughter in this book seems hollow when compared with his other work—like a comic performing his act on an empty stage in the dark, hoping for a laugh but unsure if there is somebody even listening.