Book Review: New Art City and the city of God

Today, more than ever, art has become the doppelganger of religion, and every critic and art historian chooses his or her own set of dogma. Whom should art serve? Jed Perl, author of New Art History, offers us a well-researched account of the defining moments in modern art history, with strong prejudices.
by Samuel W. Kho 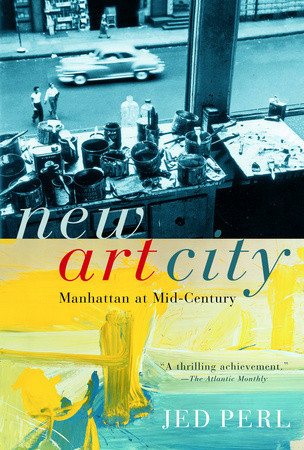 
After years of soul-searching and testing the waters of a career in art administration, I decided to leave California, go to New York City, enter graduate school, and set my sights on becoming an art dealer. I was leaving one place in life for another, wanting to arrive, or at least to climb another step as a young adult in the art world. At the same time a close friend of mine, an architect and art enthusiast, recommended Jed Perl's New Art City to me. He remarked, "If you can memorize this book, then you will have arrived." To my mind, New York City was the place to be. To my friend's mind, New Art City was the book to read.

New Art City is a behemoth of an art book, with fifty-five pages of endnotes. The reading is a formidable narrative about the diversity of concepts and personalities at work in the New York art world during the mid-century decades of the 1940s to the 1960s. In this ambitious undertaking by Jed Perl, art critic at The New Republic, the reader gets it all—the major figures, the minor players, and, so it seems, every spit and sparkle that could have inspired them. While the book serves as an excellent compendium about the period's artists and influences, the author's attempt to weave complex artistic and social forces into a definitive art historical narrative reveals unfortunate biases. For as much as Jed Perl acknowledges the contribution of forgotten artists, like Earl Kerkam and Nell Blaine, he blasts the approach of certain well-regarded artists like Robert Rauschenberg and Frank Stella.

In New Art City, Jed Perl deftly traces the ferment of intellectual ideas at mid-century when abstract painting was still at its infancy in America. Concurrent with America's economic boom following World War II, New York City uniquely prospered by receiving many European artists to its shores. The abstract painter Hans Hofmann was an influential artist-teacher. The Hofmann School and its dialectical "push-pull," "hard-soft" forms of painting is given its due by Perl. However, the dadaist Marcel Duchamp is accorded only a cursory glance. Throughout the book, Perl dotes on the lyrical painters encouraged by Hoffman's pluralist methods, but he seems to disapprove of later Duchampian artists. What he calls Duchamp's "hijinks" early on, he plainly dismisses as "a poisonous attitude, I believe," towards the end of the book. This is surprising since Duchamp is arguably much more influential among today's artists than is Hofmann.

Today, more than ever, art has become the doppelgÃ¤nger of religion, and every critic and art historian chooses his or her own set of dogma.

Devoted observers of the religion of modern and contemporary art will recognize many perennial assumptions when Perl refers to the Abstract Expressionists' "Golden Age," and then proceeds to pronounce a "Silver Age." By the time abstraction and vanguard artists were given the stamp of approval by rapidly expanding institutions like the Museum of Modern Art, Perl sounds almost mournful. Most of the readers are already familiar with that clichÃ©d question: "What is (good) art?" But really, for most art sophisticates, the question could be, "Whom should art serve?" For Perl, good art means idiosyncratic visions and lyrical styles. And if confronted, Perl would contend that art is ultimately in service, not to the public or its collectors, but to the artist—his or her positive response to the natural, the surrounding world, and even to artistic materials themselves. In New Art City, Perl seems to hate any kind of art that is self-critical and conceptually calculated. His position makes it difficult to enjoy the Pop Art of the 1960s and much of what follows to this day.

I see a parallel in the story of the Apostle Paul's conversation with the philosophers in Athens (Acts 17): "So Paul, standing in the midst of the Areopagus, said: 'Men of Athens, I perceive that in every way you are very religious. For as I passed along and observed the objects of your worship, I found also an altar with this inscription, To the unknown god.'"

The playground of artistic judgement

Being a young art consultant, critic, and "tastemaker" trained inside the academy, I have wrestled with the underlying questions that tantalize artists and critical theorists alike. When I was a studio art major in college, my teachers Mitchell Syrop and Jill Giegerich had a profound conversation in Syrop's online magazine Striking Distance. Syrop likens the authority of critique to the religious impulse: "You know when I was a kid people would walk in front of the church and they'd cross themselves. They genuflected. It was a thing that you did, you know."

Judging cultural artifacts does have a moral component. The Apostle Paul opened his address by commending the Athenians' public show of religiosity. Paul is perplexed by their altar marked "To an unknown god," but he confidently responds, "What therefore you worship as unknown, this I proclaim to you." Modern and contemporary art is really Western society's agnostic cultural square. Is it not all too easy to dismiss today's vanguard art just because its content is difficult to understand? Is art evil merely because it does not hold our ideas of beauty in authority?

Artistic creativity is a gift of God. But art as we understand it today is also a man-made place where one is may be free to create different senses of meaning. Although often philosophically rigorous, artistic judgment ought to be conceived of as a playground. The written rules within art are for democratic participation and enjoyment, not to condemn your neighbor's involvement. Perl has his romantic, artist-centered bias, and this has allowed him to write sincerely about many talented, serious artists who have never made it into the pantheon of textbook history. The story of art is touchingly humanized when Perl tells of Jackson Pollock beaming with pride to his colleagues at the Cedar Tavern when he received a postcard from painter Earl Kerkam, who apparently approved of Pollock's show in Paris. This is the strength of New Art City. In what other book would the legacy of an artist like Kerkam live on?

On the other hand, as the book enters the 1960s, Perl has a hard time accepting the inevitable sophistication of the art world. That artists were not as interested in responding to a naive Nature, whether inward and outward, but were oriented, instead, to the ominous structural forces gathering around them. Jed Perl's affirmation of the earlier generation of artists may represent the human longing to capture beauty as in the Eden God first intended. But no less real are the elements of fallen humanity, which could be described as occupying the attention of artists like Jasper Johns, Andy Warhol, and many others of at least the past two generations. In reality, any good art then or now is a complex weaving of both sensibilities.

Nine months since first being told of the book, now living in New York City, I can tell my friend back in California that not only have I read New Art City, but that I am writing a review recommending the book. Jed Perl offers us a well-researched account of the defining moments in modern art history, with strong prejudices. One of the most interesting segments is at the end, when Perl curiously closes the book by comparing two "empiricist" artists who couldn't be farther apart in style: the landscape-loving painter Fairfield Porter and the minimalist sculptor Donald Judd. Perl emphasizes how Judd like Porter pragmatically concentrated on the material specifics of the urban city rather than reacting to past history's lofty concepts. In all likelihood, it seems just as true that Judd's work was minimal precisely as a rebuff to the expressive painting of his predecessors.

Christian teleology allows for a unique freedom—at which New Art City only hints—to appreciate something of all art and all cultural forms. As the Apostle Paul exhorted his listeners, "[God] himself gives to all mankind life and breath and everything. And he made from one man every nation of mankind to live on all the face of the earth, having determined allotted periods and the boundaries of their dwelling place, that they should seek God, in the hope that they might feel their way toward him and find him. Yet he is actually not far from each one of us."

Samuel W. Kho has seen many an art world. Following graduate studies in the Art Market, he served as co-director of a Los Angeles gallery known for launching an art star or two. Through generous grants and donors, he currently curates at All Things Project, affiliated with the Neighborhood Church of Greenwich Village, in New York City. Upcoming shows in 2009 include solo exhibitions by Coralina Cataldi-Tassoni and Rex Hausmann. Kho divides his year between L.A., Texas, and New York City, but mostly works in mind, body, and soul. Some evidence can be found at www.ncgv.net and www.100stewards.com.

Sin and Grace in the City, Part 2