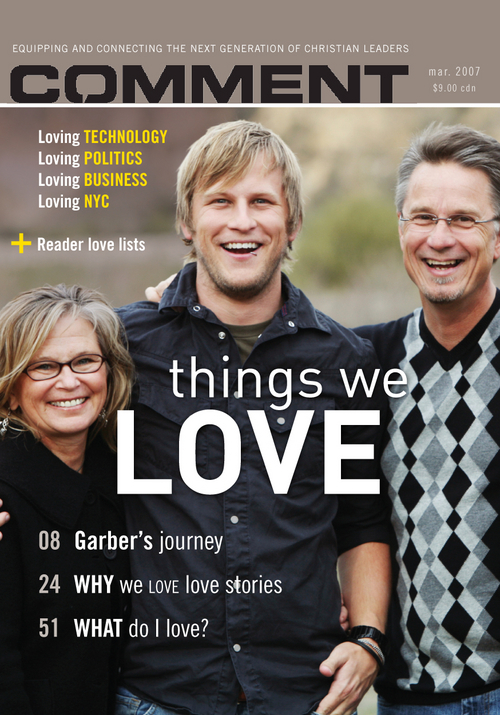 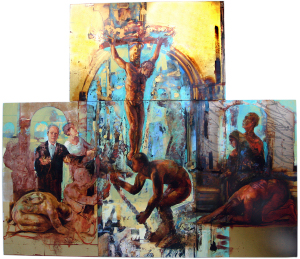 Behold, Your Mother (in progress)

Should be more famous because: He's not cranking ammo for the culture wars, just creating great fine art.

Isn't more famous because: He's not into the idea of hiring a publicist.

As soon as you meet him, it becomes immediately clear why Bruce Herman doesn't get as much recognition as he deserves. He's actually more interested in learning about other people than speaking about himself—even in an interview. In an industry saturated with celebrity personas, self-promoters, and controversialists, he's more into dialogue than monologue. 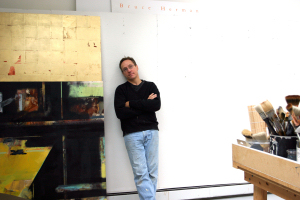 The Massachusetts-based professor was recently inaugurated as the LothlÃ³rien Distinguished Chair in the Fine Arts at Gordon College, but you wouldn't know it by talking to him. In fact, if you ask him about his art, he says, "I'm a good father, and I'm trying to be a good husband." He speaks about his two grandchildren (and a third one on the way), with as much pride as any of his paintings.

Herman has a knack for turning any conversation away from the superficial (How does his art fit in the global auction houses?) toward something worthwhile—the important stuff—Who's your family? What do you believe? Whom do you love? This is problematic for the "you talk, I listen" mode of interviewing. But the quality of Herman's art promotes itself, despite himself. He jokes that, "I seem to only paint the stuff no one would want to buy." (He's currently being commissioned for a series on the life of the Virgin Mary). With his newly endowed chair, Herman can take a year off from his professorial duties and devote himself solely to his painting—a slightly ambivalent proposition for someone with such a love for teaching. Nevertheless, the commission is a hefty one, and the endowment a distinction of the highest order.

It's his sincerity that gets Bruce Herman into trouble, the moderation of his temperament, the well roundedness of his craft. His forms are a delicate balance between abstract emotional expressions and realist figure drawings: "Some artists feel like they have to be in one of the two camps, as though there are only two—iconography or iconoclasm, realism or abstraction. And by choosing one side, they feel the need to put down the other."

Many of his works depict various moments in the biblical narrative in a form that tries to reconcile the extremes between expression and depiction or, as is more likely the case, the works offend both sides with their radical acceptance. The figures are masterfully crafted—there are unseen bones under the sinews—rendered like Michelangelo's heralding angels or Goya's "black paintings." As with the latter, Herman's figures occupy not only a physical space, but an emotional one as well.

The backgrounds of these pieces are psychological landscapes, fields of color that render a scene's subtext as dutifully as any of the icons in the foreground. His Christ on the cross reminds me of Coleridge's understanding of imagination as the violent pairing of opposites. The pain-stricken form droops in exhaustion. Behind Him, the sky is confused with high-pitched yellows, black frenetic rips and shakes, and the celestial drama of God engorged.

Herman began his formal education in the late seventies at Boston University School for the Arts, a school renowned at the time for its emphasis on the classical approach, with a focus on draftsmanship, technical mastery, and colour mixing. It was much earlier, however, that he fell in love with light and the entire palette of creative expression. He relates one of his earliest memories as child, standing on a sunny hillside, staring at a dandelion, the cosmically improbable structure of a thousand seedpods, standing erect on threadlike stalks, attached to a smaller globe at the perfect center. Herman describes his realization that this was a created object, a piece of divine craft. Even at that young age, he sensed the immediate need to relate the feeling to others. From his formalist education, Herman went on to study under Philip Guston. Even before his time at Boston University, he had experienced a more expressionist style while working with Lynfield Ott. His personal journey—from what he describes as a mundane American cultural Christianity, to a charismatic, Eastern spiritualist cult, to a final recommitting of his life to Christ—heavily influences his artistic style. In his youth, Herman became fascinated with the religious figure Meher Baba, whose mysticism incorporated all other religions, but infused them with a spiritual intensity that Herman didn't see in his disinterested community. At the time, the social aspects of the Meher Baba community provided Herman an extremely supportive outlet for his art—in the raw, emotive style that they practiced. Entering Boston University, at first Herman struggled with the strictures of the formal tradition. For a long time, as his style appropriated disparate elements, he shifted from semi-expressionist portraiture, to straightforward landscapes, to early Christian symbolism.

Herman recounts a transitional day in his classroom when he showed his students a slideshow of his work. At the time, he had been working on his landscape paintings, simple pastorals of the Gloucester countryside. One of his students (whom he credits with having taught him an invaluable lesson) raised his hand and said, "I hope you don't take this the wrong way, Professor Herman, but your earlier [expressive figurative] stuff was much more interesting." Herman didn't take it the wrong way. In fact, it was that moment that he sees as the turning point, when he realized all his life experience in the spiritualist abstractionist mode could enrich his iconographic, religious subject matter. 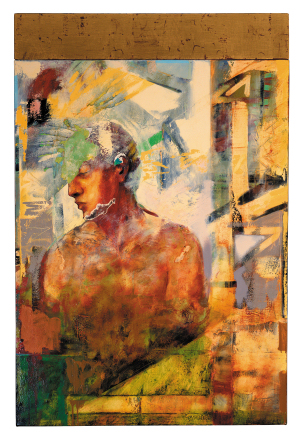 For his willingness to see both sides, Herman is not very much en vogue. To paint religious themes without the ironical, the farcical, or absent the jars of human urine, these days, is to risk the wrath of post-modernism. But Herman sees redemptive qualities in our cynical age as well: "In the last part of the twentieth century, we saw critics and thinkers begin to deconstruct institutions like a unitive historical narrative. There is no such thing as one art history now. There is no one Western tradition. And that can be a good thing."

As Herman sees it, the future of Art (capital 'A'), is that there is no "Art," (no more capital 'A'). With no single school's dominating the definitions and canons that will lead us into the twenty-second century and beyond, many smaller groups are formed. "A niche society," as Herman puts it, can be beneficial for artists who for some reason or another find themselves outside the prevailing culture. With no dominant aesthetic, there is room for many aesthetics. And the only way to bridge gaps in a fractured society is discourse.

In conversation, as in painting, Bruce Herman is a connoisseur.

To weather the hermeneutic of suspicion, Herman says that many of his young students try to adopt an overblown style of some kind, create a high-concept persona, a gimmick for critics and buyers to latch on to. Herman discourages his students away from that, and directs their energies instead toward technique. Style, he says, is a natural extension of good craftsmanship expressed with individual personality. "A conscious taking on of a style is like deciding to have a cultural impact. It's a dilettante pursuit. I'm not interested in making a cultural change. I'm interested in doing my work."

For this reason, Bruce Herman doesn't like to talk about his career: "What career? There's no career to speak of, just my life." And it's the same reason he's more interested in discussing people than paintings: "I see my work as a vehicle for relationships. A great painting isn't great until viewers come and engage with it." To him, the goal of a painting is to speak to a viewer, and the viewer to speak to the painting. This can be difficult, if not impossible, when you have nothing substantive to say. It can easily be confused with didacticism. But Herman also rejects the idea of conversation as a means to some rhetorical end: "[Bach] didn't try to advance any other agenda than the work itself and the glory of God as a hoped-for outcome." Herman is very quick to point out that the art itself should not be used to teach or propagate one's views: "Every historical instance I can think of in which the arts have been deliberately employed to change or transform or improve society, [has] fallen flat [or] failed miserably . . . I think art is more about play, pleasure, and yes, insight—but I think the insight is a by-product, not a conscious aim of the art and artist."

For Herman, the by-product of that play and pleasure can lead to the reconciliation of vastly differing people and conflicting worldviews. In this way, in a less-than-violent pairing of opposites, Herman is bringing to fruition the imagination of some greater artistic vision.

With so many nuances, Bruce Herman wouldn't make a very good politician. But just ask his colleagues about him and you'll hear, "Bruce is a great man and a great artist," in that order . . . just the way he seems to want it.

Daniel Nayeri is a writer and freelance editor in New York City. He wrote and produced The Cult of Sincerity, the first feature film to be YouTube. He is currently working on a screenplay, as well as the next book in his Young Adult series. He loves pastry chefing and Street Fighter 2, hates the word "foodie," and is an award-winning stuntman.

A New Ethos of Craft and Beauty?

Making the most of college: writing with purpose