Over thirty-five years a group of innovative leaders have built a campus ministry in the states of Ohio, West Virginia and Pennsylvania that is distinguished by a unique purpose, a committed regionalism, and solid partnerships with churches, community organizations and colleges.
by Gideon Strauss

Like a stone on the surface of a still river
Driving the ripples on forever
Redemption rips through the surface of time
. . .
—Bruce Cockburn, "Cry Of A Tiny Babe."

I think I first heard about the Coalition for Christian Outreach from someone who told me about the maverick itinerant philosopher of western Pennsylvania, Pete Steen, and the astonishing influence he has had on students in that part of the world during the 1970s. I have since attended several of the Coalition's annual Jubilee conferences for students, and have become friends with several Coalition staff and alumni, and I can without qualification say that I think the Coalition for Christian Outreach is the greatest campus ministry on planet Earth.

The reason for my very high regard for the CCO can be found already in the purpose statement which has remained unchanged since the founding of the organization on March 23, 1971: Transforming college students to transform the world. As a neocalvinist I am inspired by the transforming vision that CCO staff over several generations have communicated to college and university students. I am inspired by the evidence of the influence of this vision in the lives of CCO alumni—both former student participants in the ministry, and former staff whose vocations have taken them elsewhere—who are bringing cultural renewal to a wide diversity of spheres of society.

The waves of influence that go out from the CCO's epicenter in Pittsburgh, Pennsylvania, can be traced in my own life. In 1999 I was on a sabbatical in Vancouver, British Columbia, taking classes at the wonderful Christian graduate school Regent College, when my friend Matt Swanson handed me a copy of Steven Garber's book, The Fabric of Faithfulness: Weaving together Belief and Behaviour during the University Years. That book has been one of the four or five most influential books I have ever read, and provided much needed direction to my own sense of vocation at a moment of personal crisis. My dear, late friend Matt was a CCO staffer before and after his time at Regent, and Steven Garber—who has since become a friend and vocational mentor of mine—also spent years working with the Coalition. Without Steven's experience as a CCO staffer, his book would probably never have been written. Without Matt's appreciation of that book, gained in the organization, I would never have heard of it. And without that book, the course of my own life since 1999 would without doubt have been very different. This is only a small, personal instance of the influence of the organization, but it is an example of the way in which an organization can touch the lives of people who are in no way directly connected to its activities.

The CCO is unique among campus ministries in several ways. While many campus ministries today have been influenced by the kind of culturally transformative vision that used to be limited mostly to followers of Abraham Kuyper, the CCO led the way in insisting thirty years ago that Christian discipleship has implications for the studies of students, and for their everyday working lives after they graduate—implications that start with a personal faith life marked by devotional depth and discipline, but that ripples out into every corner of life, and into the very structures of society. This first distinctive—an emphasis on the cultural implications of the Christian gospel—is joined by a distinctive emphasis on cooperative partnership which sees the vast majority of CCO staff holding joint positions, employed both by the CCO and by a local church, community organization, or college. CCO staff are present on 77 campuses, and provide services to their co-employers in the kind of positions where they can be most present in the lives of students—serving for example as coaches or faculty members, residence hall directors or student activities coordinators. The final distinctive is the CCO's emphasis on a particular geographical area—basically, a 300 mile radius around Pittsburgh, in the Tri-State region of Ohio, West Virginia, and Pennsylvania.

As with every great organization, the CCO has a significant pre-history. In this case that pre-history has to do with the confluence of three separate streams of student evangelism and discipleship in Pittsburgh, in the context of the Jesus movement of the 1970s. Reid Carpenter, an effective Young Life worker with high school students wondered how his protégés would be challenged and encouraged once they reached college or university. Rock musician John Guest wondered how the ethos of the 1970 Revolution + One conference could be embodied in a more enduring student movement. Presbyterian minister Bob Long wondered how city churches could partner with one another in their work with students.

This confluence was not happenstance—it was engineered by these three men who first drew Pittsburgh churches together in a Committee for Student Mobilization, and out of that founded the CCO. John Guest served as the first Executive Director, and recruited the first staff members. Bob Long soon succeeded him and for almost thirty years built the organization toward its present scope of influence. Pete Steen very briefly worked for the CCO in the early 1970s, but the neocalvinist vision he so enthusiastically shared with students and friends on long car trips and in all night coffee shops continues to be woven into the DNA of the organization.

When Dan Dupee became President of the CCO in 1999, he realized from casual conversations that along with the growth and success of the organization came a diffusion of its sense of purpose and its understanding of shared values. He initiated an institutional dialogue, meeting with ten staff members at a time to listen for their sense of the organization. Out of this dialogue came a re-affirmation of the founding purpose of the Coalition—Transforming college students to transform the world—and a clarified articulation of its values (All things belong to God/Jesus changes people's lives/We love college students/Faithfulness is pursued together/We celebrate life).

In a brief telephone conversation with Mr. Dupee earlier this week, he emphasized that there is very little written on Christian organizational development, and that the CCO found the process of translating its purpose and values into a shared roadmap with guideposts along the way complicated. Working through a consultative process in its efforts to think about institutional stewardship into the coming quarter century has been difficult work.

The CCO continues to be built on sound foundations, providing a solid Christian campus ministry to students in its geographical sphere of responsibility. But as we can learn from its founders, and from the present generation of leaders called to steward its purpose and infrastructure, the work of building organizations is not easy, even as it is necessary.

As I wrote at the beginning of this series of short articles, cultural change does not happen overnight, and if we strive for enduring renewal we need to invest ourselves in the process for the long haul. The 35 year-long history of the Coalition for Christian Outreach confirms that this is the case—but also that faithfulness in practicing a Christian presence in a particular sphere of service often shapes a cultural space rich in blessing. Pittsburgh and the 300 miles around it are much the richer for the careful building of this institution, serving students and preparing them in their stead to serve. 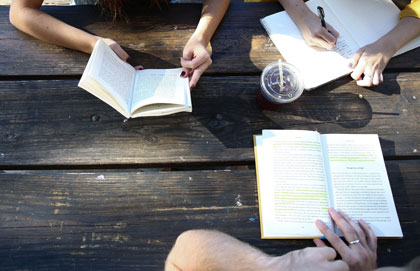 Not all values can be quantified.