Business and the Development of Christian Social Thought

All spheres of life, including business, are accountable to God . . . To think and act otherwise is to split apart the human person in ways that denigrate rather than promote human dignity and flourishing. 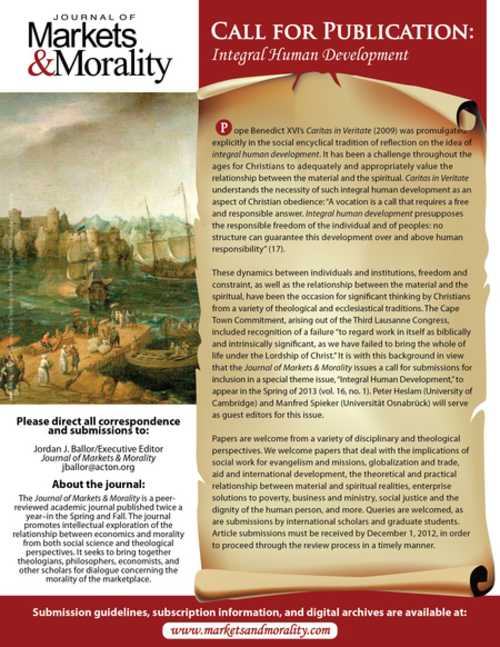 Editor's Note: This essay originally appeared as the editorial for the Spring 2012 issue (15.2) of the Journal of Markets and Morality. Reprinted with permission.

Gratian, the great medieval codifier of canon law, included this aphorism: "It is always unlawful for men to fornicate, but it is sometimes lawful to do business." To say that the Christian tradition's interaction with the world of business has been mercurial might be an overstatement, however. There has been a relatively clear development in the attitudes of Christian theologians, from the church fathers to the present day, moving from outright criticism and cautious skepticism (if not unambiguous rejection) to relative critical appreciation and cautious optimism (if not uncritical embrace). A recent book by Anthony Percy provides a helpful survey of these developments, particularly over the last two centuries of Roman Catholic social thought, culminating in the encyclical of John Paul II Centesimus Annus, in which Percy writes that "John Paul II brings to light the relational dimension of the entrepreneur in a way that no other pope before him has done."

The church's understanding of the realm of production, consumption, exchange, and service may have achieved a fundamental insight with Centesimus Annus, but reflection on these areas has not remained stagnant in the last two decades. In 2004 the All-Russian Orthodox Council of the Russian Orthodox Church developed a document that includes "Ten Commandments for Businessmen," with mandates such as the obligation to "remember the spiritual meaning of life while earning daily bread," and observations such that "the culture of business relations and adherence to promises help people become better and improve [the] economy."

Most recently Benedict XVI's encyclical Caritas in Veritate has applied the criterion of truth to human social life, particularly in light of global realities. As Michael J. Naughton notes, this encyclical is part of a growing recognition "that we need to embed our understanding of business and organizational life in a larger transcendent reality that has the capacity and the resources to order our interests, profits, and contracts to a good that develops us in relationship to others. We and our organizations need integral human development." To this end the Pontifical Council for Justice and Peace released a Note this Spring, The Vocation of the Christian Business Leader: A Reflection, which recognizes the good that Christians are called to do in the world of business. In spite of challenges represented both by sin (both personal and structural) as well as technological change and innovation, "Business leaders who are guided by ethical social principles, lived through virtues and illuminated for Christians by the Gospel, can, nonetheless, succeed and contribute to the common good."

Protestant social thought concerning the business world has likewise struggled to integrate the Christian faith with faithfulness in spheres traditionally understood to be secular. In our Scholia feature in this issue, the Elizabethan bishop John Jewel (1522-1571) applies Christian moral teaching to the problem of usury and loans. Like many of his predecessors and contemporaries, Jewel assumes a fundamentally static view of economic life. In his contribution to the symposium in this issue from the Evangelical Theological Society's Theology of Work and Economics Consultation, Craig Blomberg identifies this theory of "limited good" as also characteristic of the person of the biblical world, in which "if a member of their society became noticeably richer, they would naturally assume that it was at someone else's expense." This perspective represents a strand of continuity between the biblical and the later Christian world up through the early modern era. As Jewel writes, "Here, you say, he who lends is a gainer, and he who borrows is a gainer. It does good for both. If both are gainers, who is the loser? For usury never passes without working loss. Take this as a rule: there is never usury without loss." Again, this classical view is shared across confessional lines in the early modern period. No less sophisticated a thinker than Juan de Mariana (1536-1624) also contended that "one man's loss is another man's gain. There is no way around that fact." Amid Jewel's sharp critique of usurious lending, however, there is an implicit recognition of the good that can be done by joining together in partnerships for commercial enterprises where the prospects for both gain and loss are shared. Recognition of the dangers as well as the positive possibilities for business life has thus characterized historical Christian reflection on the economic aspects of human society. Contemporary Protestant writers like Jeff van Duzer and John C. Knapp have written cogently about the need for more thoroughgoing and dialogically critical interaction between church leaders and businesspeople. Perhaps most notably the Cape Town Commitment arising out of the Third Lausanne Congress on World Evangelization in October 2010, echoing Benedict's emphasis on truth from Caritas in Veritate in a section on "Truth and the Workplace," confesses that "we have failed to regard work in itself as biblically and intrinsically significant, as we have failed to bring the whole of life under the Lordship of Christ." All spheres of life, including business, are accountable to God and realms where Christians are called to faithfully follow Jesus Christ. To think and act otherwise is to split apart the human person in ways that denigrate rather than promote human dignity and flourishing.

Inspired by recognition of this pressing need to properly relate material and spiritual goods within a comprehensive vision of the human person and social life, the Journal of Markets & Morality has issued a call for publication for a theme issue to appear in the spring of 2013 on the topic of "Integral Human Development." But to reiterate Naughton's observation quoted above, "We and our organizations need integral human development." Or in the words of the Cape Town Commitment, which picks up the language of the Micah Declaration, "Integral mission is the proclamation and demonstration of the gospel. It is not simply that evangelism and social involvement are to be done alongside each other. Rather, in integral mission our proclamation has social consequences as we call people to love and repentance in all areas of life." In good faith all people of goodwill are invited to contribute to these ongoing efforts to glorify the Lord in all that we do (1 Co. 10:31).