Capitalism at the Crossroads: a review essay

Seeing reality through a single lens, be it the old one of profits or Stuart Hart's emphasis on sustainability, simply won't do. Stuart Hart ably analyzes and critiques contemporary capitalism, yet Hart's framework is his book's fatal flaw.
by Ray Pennings 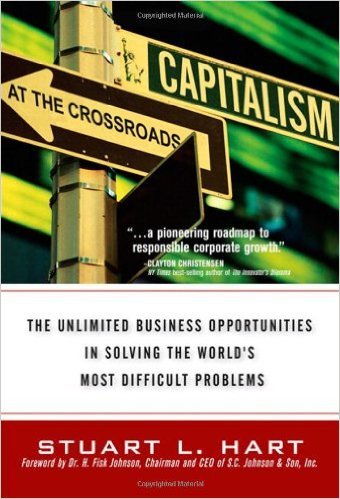 
Stuart Hart's analysis of global capitalism's current challenge is stark. Terrorism threatens our security, the environment cannot sustain the present economic model, and an anti-globalization movement threatens our stability. The challenge is intensified because no social institution appears able to fill the leadership breach: "Global governance is in its infancy, religious fundamentalism has become a divisive rather than a constructive force, and civil society lacks the resources and technology to make a large enough impact on its own" (236). Our only hope is that the institutions of global commerce—multi-national corporations—will reinvent themselves and fill the leadership vacuum: "Unless global capitalism can extend its bounty to the entire human community in a way that respects cultural diversity and husbands the natural capital on which it depends, we may well witness the marginalization of this great institution in our lifetime" (236).

Hart's thesis is bold and much in his analysis is commendable. As the SC Johnson Chair of Sustainable Global Enterprise at Cornell University's Johnson School of Management, sustainable development is more than an argument for Hart. It's his passion. In both his book and in numerous interviews available on-line, Hart introduces his ideas by noting that when he was born in 1952, the world's population was slightly in excess of 2 billion. Today it is 6.5 billion. It is conceivable that before he dies, the number of human beings inhabiting the planet will exceed 8 billion. Capitalism has succeeded in addressing the needs of approximately 800 million people, employing 80% of the world's resources. The intensity of the challenges facing capitalism will increase exponentially under the present scenario and, unless something changes, we are headed for disaster.

Hart further details the challenges facing contemporary capitalism. He frames the issue as one of ongoing evolution throughout the past fifty years. Whereas social responsibility once was viewed as a "trade-off" paid out of obligation, by the eighties it was understood as a potential "win-win" and an opportunity for business. Today's corporate sector generally recognizes the importance of greening business practices and has developed the internal capacities to do many good things. But business mostly still views environmental and social responsibilities as "disruptive acts" to companies' core business lines.

Hart supports his analysis with over twenty specific corporate examples of companies that are innovating corporate strategies, whose models are profit-making, sustainable, and inclusive. On this basis, Hart develops a framework in which a new model of global commerce might be advanced. His model is a pyramid in which the focus is on understanding ways in which "the needs of the four billion people at the base of the economic pyramid (BOP) (might be served) in a way that is culturally appropriate, environmentally sustainable, and economically profitable" (15).

Hart delineates three economies: the money economy, the traditional economy and nature's economy. But most managers in multinationals continue to view the global market as a single monolithic entity. Their mistake is focusing on customer purchasing power as a prerequisite for economic opportunity or, to use the language of his framework, they incorporate the ground rules of the money economy for participation in the traditional and natural economy.

The strength of Hart's contribution is his case study approach in which alternative strategies—not all of them success stories—are tried by companies that intend to reach the BOP market. One such example is Cemex, Mexico's largest cement company. A 1994 financial crisis prompted an analysis which showed the company's difficulties were caused almost entirely by the 60% of its market that might be considered upper and middle class, while the forty percent that made up the company's "poor" market remained stable. The analysis showed that the poor took an average of thirteen years to build a do-it-yourself, four-room home in the shantytowns. While that helped Cemex understand why this segment of its market followed a different logic than the rest of its customer base, it also identified an opportunity. Cemex introduced a Patrimonio Hoy (Equity Today) program which helps potential customers save for a home through a weekly program. The program creates some efficiencies with economies of scale and provides material storage systems that reduce the waste that construction spread over a long period of time brings. The results were significant increases in incremental cement sales and profits for Cemex.

Another example Hart cites is that of Grameen Telecom's providing phone service to rural Bangladesh where the average per capita income is $286 per year. Recognizing that the conventional model of selling phones to every household would never work, Grameen set up a system in which they set up women in local villages as entrepreneurs to sell mobile phone service, using a mobile phone and solar recharging equipment. Villagers used the phone service instead of making expensive and time-consuming trips to other towns. Within half a dozen years, the system was providing telephone access to over 50 million people and earning the company net profits of $74 million in 2004. The independent resellers were earning wages that put them at the upper-middle end of the income scale for the region.

As Hart works through his case studies and their implications, he highlights how easy it is to become blinded by our economic measurements and tools, failing to recognize their defined limits. Not all economic value or opportunity is captured by an analysis of GDP. While the numbers may not show any difference in net income, there is a world of difference between the homeless beggar on the streets of Bhatan and a Ladahki farmer who is part of self-sustaining Himalayan tribe in very harsh circumstances. Hart uses Ladahki as a metaphor for the down-side of development, illustrating how the introduction of tourism and development of the region with bridges, roads, and western education led to the dismantling of Ladahki traditional culture and, as a result, to a host of "western" problems. While modern medicine and technology brought clear benefits, "on balance, the traditional nature-based society, with all its flaws and limitations, was probably more sustainable, both socially and environmentally, for the Ladakhis" (167).

Hart concludes his book with five challenges for companies that "try to make sustainability happen in the real world of budgets, quarterly earnings reports, discounted cash-flow analysis, and the discipline of the investor community" (220). These include:

Hart's final chapter is well worth the read for every manager. It contains strategies and insights applicable to every company, not just those focused on the BOP marketplace.

Hart's focus on sustainability is a commendable anti-dote to the quarterly-profit mentality that plagues too much decision-making in contemporary capitalism. And yet, like any virtue when it is absolutized, sustainability is not the only lens through which economic strategy should be judged. Sustainability "requires a healthy dose of humility and respect, as well as a greater appreciation for the many and varied ways that people choose to live."(220). Especially when placed in contrast to the one-size-fits-all perspective of contemporary commerce which has effectively westernized all of the markets it has penetrated, with many of the less virtuous aspects of western culture being the most prominent, Hart's point about humility seems hard to argue.

Economic creatures to the core?

Yet Hart's analysis contains an implicit relativism. For Hart, suggesting that some cultural and social arrangements are somehow better than others is misplaced. The primary moral wrong is to participate in activities that are not inclusive or are environmentally unsustainable. Religion and religious organizations are discussed in the context of extremism. The implication is that any lens other than sustainability is somehow flawed and, in some cases, contributing to the instability of terrorism with which we must now cope.

Hart's conclusion is direct: either global capitalism reinvents itself to become a leading inclusive force that serves all of the world's peoples or our future is very bleak, indeed. To be fair, he nuances this claim and recognizes a role for other civil society institutions. But at the heart of his argument is the contention that only corporations can lead this change.

If Hart is right, human beings are economic creatures to the core. In Hart's understanding, we can only correctly align the institutions of commerce. All must work constructively to minimize waste and utilize the earth's recourses in an efficient manner, and avoid rigid-mindedness and fights about belief systems entailing right and wrong. Hart's world is a wonderful place for both this generation and "all the children yet unborn" to whom the book is dedicated.

For all of the worthwhile insight, helpful analysis, and prescriptive strategies he provides, Hart's framework—every bit as much of an ideological prism as any other—is its fatal flaw. The prescription that any one sphere of society, be it the economy, the church, or any other, can drive social change is flawed. Social change is driven by the synergy and interaction of various social institutions, and each must be respected for the integrity of its contribution. Human beings are economic beings. But they are also political beings, social beings, and religious beings. While few would argue with Hart's desire for sustainability, his economic house is built on a foundation of rigid secularism. Such a foundation is not capable of supporting the human house in all its dimensions.

I hold little hope for Hart's prescription nor do I share his implicit optimism that most of humanity can be convinced to buy into his scheme because it is in our shared long-term economic self-interest to do so. But Hart's model is commendable in its working with market incentives to achieve economic ends. His strategy for western companies' investing in BOP markets and being prepared to do things differently will likely result in significant more benefits for many more of the world's peoples than governmental or non-governmental organization relief programs. Relief programs still have their place and, given their motivation is usually quite different than sheer economics, they will naturally have a different focus. When corporations, governments, and relief agencies (frequently religiously motivated) find ways to work in synergy and complement efforts, the likelihood of success can only increase.

Global corporations: Can big be beautiful?

On Globalization: An Exercise in Public Theology