A more expansive version of this article appeared in Rainbows for the Fallen World (Toronto: Tuppence Press, 1980).

Eating good food in good company is an important human activity. As the bedroom is rather basic to a marriage, so the kitchen, I dare say, is fundamental to the well being of a family. And by "kitchen" I mean all that surrounds the preparation, serving, and sharing of a mealtime.

The paintings of Jean Baptiste Siméon Chardin (1699-1779) are a good place to look for a vision of how one might shop, cook, and handle food in a way that supports the making of a home for a family.

Chardin's Pourvoyeuse (Back from the Market, 1739) has no trouble at all putting quality clothes together with carrying fresh, large loaves of crusty farmer's bread on the street. She is a woman who sails out of the house like a gallant clipper ship, cleaving through crowds with a sure prow, billowing white blouse, sleeve and cap and satin-blue apron, to fetch food for her household. Pert enough to demur at prices but too well dressed to haggle, she'll settle for a humorous pleasantry from the friendly grocer if she trusts his produce.

There is something disarming, wholesome, and joyful about carrying mutton home, held tightly in a clean napkin. (It is not a plastic bag!) When a butcher chops your meat in front of your eyes and the bargain is a fair one, you have a sense of achievement—a sense of play—that is lost when the flesh appears packaged in cellophane or is taken from a freezer like a block of ice.

Chardin's kitchens are never cluttered. But they also don't have the spic and span brightness of seventeenth century Dutch interiors and their rectilinear pattern of tiled floors.

The scumbled (softened together) colours and hints of natural disorder (bread rests over the edge of the counter top; a key is partly turned in the lock; one flask lies on its side without a cork) all contribute to the restful casualness that pervades every one of Chardin's workaday scenes. There is a homely peace, a kind of innocent glow of tranquility around everything, as if household chores have meaning. It is most natural for someone else to be busy in the next room, answering the door. Meanwhile, the spigot of the water reservoir stands ready, like a domestic sentinel, to be tapped.

To catch Chardin's insight into kitchen life, it is instructive to look at one of his portraits of utensils, Goblet D'Argent (The Silver Goblet, painted after 1745), and compare it with one from almost a century earlier, by Willem Claeszoon Heda, Stilleven met vergulde bokaal (Still Life with Gilt Chalice, painted in 1635).

The seventeenth-century Dutch still lifes work out of the old vanity of vanities tradition. A painter would picture, for instance, an exquisite bouquet of perfect flowers, but if you looked closely, you would find a couple of (short lived) flies, or a dead bug, reminding one and all that the beautiful life of man and beast as well as of cut flowers is brief, and soon—gone.

Willem Claeszoon Heda's crystal wine glass, wrought gilt chalice, and opened oysters on pewter plate have pracht—brilliant beauty. They are a showpiece of inanimate glory in God's world. Each piece stands out, statuesque, sharply defined in the airless space; rich detail is given minute attention; the whole constellation seems to be artificially arranged so that one can see close up the jewel like splendour of such ware. Of course the ubiquitous lemon is peeled and drying out, and the luxe chalice is knocked over, as if someone had to leave the table behind in a hurry, called away by an emergency of life . . . or death?

Chardin is doing something different.

His household articles show loving care, but they are more ordinary than exquisite. They are in use by people and not frozen to perfection. His apples have a normal, mottled character that says they are meant to be eaten; the sauce needs to be stirred with the spoon and ladled; the patina of the goblet is gentled by reflections of red, blue, and soft brown so that the whole world of silence in the painting is still warm, homespun, alive, and intimate.

There is a kind of paradigmatic completion and order to this kitchen life that reminds one of Vermeer or Pieter de Hooch, or of Cezanne and Georges Braque's still lifes. But again, Chardin is able, in his day, to get us to envision coarse vegetables and fruit, pots, pans, and ladles, haloed with a kind of quiet dignity that is humbled, recreative, even somehow wholesomely naÃ¯ve.

I do not mean to imply that one cannot learn much from the disturbed still lifes of the seventeenth century Dutch Golden Age, Willem Claeszoon Heda's, where an awareness of sin, and the mementoes of death—at my back, hurrying near—sketch large horizons, common to the metaphysical poetry (for example of John Donne) then current too. Perhaps Chardin can be faulted for not making brokenness and evil an article of faith in his art; his children playing games and his women at work sometimes have the untrammeled beauty of porcelain dolls. But Chardin's uncontorted depiction of household life is valuable for us to discern in our brash age of kitsch, affluence, too-rapid change, and self-absorption.

Children and mothers were considered weak and unimportant by the educated elite of the secular eighteenth century: Chardin shows their simple, old fashioned glory without being either anecdotal or picturesque.

Kitchen work was something menial the servants did in out of the way places: Chardin hallows the kitchen task with unaffected respect, showing by the arrested gesture and thick impasto of paint how worthy an absorbed act of human service can be.

Sumptuous food, antique silver, a fashionable dinner service—if you had it—along with your provincial French furniture, was used to show off your aristocratic taste and that you belonged to the upper crust above the common people: Chardin's economy finds more in less, and hallows—by the assonance of annealed colours—earth's fruits and mean bowls of copper, tin, and wood made by human hands.

If ever I have to wait in line at the check out counter of an upscale grocery chain store (where more than the price is wrong), I think of Bertolt Brecht's propaganda poem called "Hollywood," where people queue to buy and sell lies, he says. Some of us may need to walk a long way to find a family market where produce can pass from hand to hand and be bought face to face, but it is worth a lot of time and money to be able to come home feeling like la Pourvoyeuse, a provider of good food for the family.

Some of us may be too fussy about our dining decor and serving bowls, living as if we are wedded to our possessions and gastronomic pleasures. Others may put a bar in their basement and treat the kitchen like a catering automat, denaturing their home in the name of genial hospitality. Expensive things are never the coin of happiness. And neither is going back to munching nuts and berries while seated on orange crates.

We need to see that eating supper as a family by candlelight—today—can be an act of kudos rather than nostalgia, redeeming the life time of a meal: if preparing the food, surrounding it with conversation and perhaps music, and cleaning up the dishes can be done by husband and wife and children in a shared spirit that knows at least what Chardin discovered.

Some may prefer to embody the boon of family life in a style closer to the boisterous vigour of Jan Steen's families than to the gentle solemnity of Chardin. But the point and call remains.

Critic: It looks like you've sold out to the bourgeois ethic, Seerveld. Don't you know there are millions dying in India while you prate about silver goblets in the eighteenth century and talk up a rich, intimate kitchen life! And how can you buy bananas instead of boycotting them when the workers of South America who pick them are underpaid? Have you no sense of your corporate, middle class guilt?

Seerveld: We must never pit structural reform of society against acts of renewal in daily life. The style of eating food is practically as important as the wholesomeness of the food itself. I intend to keep on making homemade banana bread for as long as I have left to pluck laughter out of what becomes waste in western civilization. Let me share my banana bread with you. 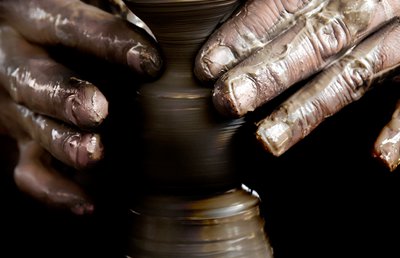 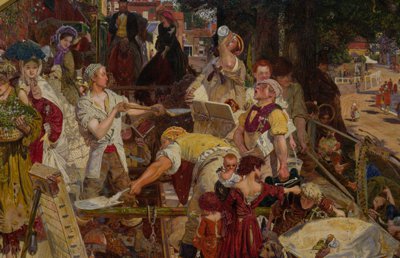 The Beauty of Work, the Injustice of Toil

Why John Ruskin should be a patron saint of the "faith and work" conversation.