The direction of desires toward God and toward friendship is a splendorous and legitimate use of our desiring, other-directed eros.

The Christian sexual ideal, like that of many other religions, has always required abstinence until marriage. "But," a friend once asked me, "what should I do with my sexuality until then?"

Too often, the consensus is that one must simply fight back and slay the virile demons of male desire. My friend's question, though—in its frustration—pointed to a more stark reality: eros will not politely back off, stage left, when asked.

Sigmund Freud's name is forever associated with sex—an unfortunate epigraph, I think, for anyone who takes himself seriously. And Freud did take himself seriously. According to one of Freud's great interpreters, Philip Rieff, the man was actually something of a prude. Not the kind of prude who faints at the mention of genitalia, to be sure. Nevertheless, he truly was the cultural snob who thought carousing disgraceful.

But Freud admitted people really are sexual, and so he repulsed his Victorian predecessors as much as his libertine Edwardian contemporaries. Freud said that repression leads to all kinds of problems because libido is far too strong. Like magma below the crust, it's going to erupt, eventually.

While the desire is there, and boiling, that doesn't mean it has to be let out by means of sexual acts. Freud's key insight was that eros is really quite mutable. The drives are inevitable, but sex is not. It is possible to use libidinal verve otherwise—call them productive releases. Freud called it sublimation. Arts, labour, great social works, and invention could all be possible activities of sublimation—not because they are sexual, or replace sexual frustration, but because they can harness the rocket fuel and creativity of subconscious desire.

This point has not been missed by some people who take up celibacy for religious reasons. In a culture that tends to focus on indulgence, it is fitting that Freudian theories of sublimation would be better understood by people who are already refocusing their sexual energies. While the vow of chastity is properly one of self-renunciation, a monk must still subsequently live out a life in which he never stops being human.

I stumbled across this issue recently while reading about the original L'Arche community, founded in the 1960s by the Canadian Jean Vanier alongside his mentor, the Catholic priest Fr. Thomas Philippe, as one of the first group homes for adults with developmental disabilities. The book, Theology and Down Syndrome (Baylor University Press, 2007), mentioned how Vanier dealt with the sexuality of disabled people: "[Vanier] notes that in L'Arche, 'freedom in sexual relations was not allowed, but we acknowledged the possibility that some people might be guided toward greater autonomy and, eventually, towards human love in the bonds of marriage.' Yet the communal practice of celibacy also mediates the mystery of love and of being in love with Jesus."

The communal practice of celibacy, notes author Amos Yong, spiritually formed the group. In this way, love was "mediated"—not only in common sacrifice, but in the heightening of friendship.

The intense scope of Christian friendship has long been experienced within monastic communities. Specifically, the art of Christian letter-writing largely took shape among members of various monasteries and convents during the Middle Ages. For example, consider the prose of this monk:

But since you unexpectedly fell in love with [my letters] and convinced me to give birth to beautiful off-spring, behold! For you, I have openly disregarded any shame. I display my beauty. Just like the Median peacock (that domesticated creature that is a lover of beauty), I exhibit on a theatrical stage the beauty of my words.

The language of these letters borders on being suggestively sexual. This has led some historians to read homosexuality and sexual displacement into such correspondence—some of which may indeed have existed. However, this hermeneutic completely writes off the real human activity of sublimation, in which vague and indeterminate subconscious desire can be effectively re-routed to other ends.

Love was redirected not only toward friends, but toward God. The 19th century poet Gerard Manley Hopkins was an intense lyricist and an English Catholic priest. Having homosexual desires and having taken a vow of chastity, he had perhaps double the sublimation.

Resign them, sign them, seal them, send them, motion them with breath,
And with sighs soaring, soaring sighs deliver
Them; beauty-in-the-ghost, deliver it, early now, long before death
Give beauty back, beauty, beauty, beauty, back to God, beauty's self and beauty's giver.

Hopkins delivered such desire not only on beauty, which is necessarily the object of eros, but elsewhere on the less likely subject of God's "grandeur":

The world is charged with the grandeur of God.
It will flame out, like shining from shook foil;
It gathers to a greatness, like the ooze of oil
Crushed. Why do men then now not reck his rod?
Generations have trod, have trod, have trod;
And all is seared with trade; bleared, smeared with toil;
And wears man's smudge and shares man's smell: the soil
Is bare now, nor can foot feel, being shod.

In one (Thomistic) sense, sexuality has its end and purpose in a certain kind of sex. However, eros is far more powerful than a single activity. In celibacy, whether held until marital union or for a lifetime, this may be particularly helpful. For sexuality is not simply in wanting to do a particular set of activities. It is a far more encompassing source of personality in which virility and vigour and longing all traffic and intersect. The Christian (and, incidentally, Freudian) view is that desire that is not expressed in a legitimate sexual relationship can and should be redirected.

But the full implication of this thesis extends even to those who share conjugal union. Those Christians who have stayed faithfully abstinent until marriage still find that sex is not the fulfillment of everything. Sex is not even the fulfillment of all sexual desire. Because desire is vague enough and subconscious enough, a single physical act could never spend it away. So the lesson is actually the same for the sexually active as it is for the celibate: the direction of desires toward God and toward friendship is a splendorous and legitimate use of our desiring, other-directed eros. In some ways, people do not need to be given the desire for God—we need to be taught to re-direct and harness the longings that already compel us. 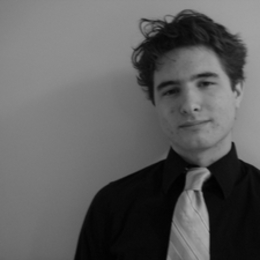 Bryan Wandel is a Research Fellow with the John Jay Institute, doing original research on Early Modern English politics and religion. He has worked in the U.S. House of Representatives since 2008, and lives in the Washington, D.C. metro area with his wife and 5-month-old daughter.

Meditations on Andrej Rublëv's Icon of the Holy Trinity.