Christians and Alchemists Unite! The Artwork of Michelle Mackey

If the practice of alchemy is the process of "transforming something common into something special," it could easily be seen as a redemptive actâ€”a very Christian concept indeed.

1 : a medieval chemical science and speculative philosophy aiming to achieve the transmutation of the base metals into gold, the discovery of a universal cure for disease, and the discovery of a means of indefinitely prolonging life

2 : a power or process of transforming something common into something special

3 : an inexplicable or mysterious transmuting

For various reasons, alchemy (and alchemists, by extension) has maintained a rather negative reputation among religious circles. It could be that the medieval attempts to create a potion for immortality that later evolved and generated the discipline of inorganic chemistry never lost their heretical connotations. It could be that it's a little arrogant to try to bottle immortality—seemingly God's exclusive realm. Perhaps it's also the idea of changing the nature of materials for the purpose of wealth creation. Maybe it's that it goes against the Protestant work ethic tradition. Maybe it's greed. Maybe it's jealousy. Alchemy just seems to be at odds with how Christians tend to view things.

If you take the second and third definitions from the dictionary, however, you get something rather different and much more amenable to the Christian faith. If the practice of alchemy is the process of "transforming something common into something special," it could easily be seen as a redemptive act—a very Christian concept indeed.

I believe this is what painter Michelle Mackey is doing in her artwork. Mackey collects images from her environment, sometimes mental and sometimes documented, and incorporates them (or parts of them) into her paintings, re-contextualizing them to create something new—something special. Certainly, the notion of what is special and what is not is highly subjective, but Mackey has discovered a process, especially in her recent black and white paintings, of transforming potentially banal imagery into strikingly beautiful compositions. In this way, Michelle Mackey's practice is itself a form of alchemy.

This is also demonstrated through the third part of the definition of the term alchemy. Michelle Mackey deliberately aims at a "mysterious transmuting" of her surroundings in the way she paints. You might be tempted to think that a reductive palette, such as one with only black, white and shades of gray, would be constraining for an artist, but Mackey has used these tight parameters to free herself to push further in her exploration of how space and meaning can be conveyed through painting.

Mackey utilizes a variety of methods in constructing her paintings. Transient (2009) is a 48" x 40" mixed media painting on resin-coated panel. The image is dominated by black space and striking architectural shapes that resemble three arches in a long corridor. Before allowing the viewer a simple assumption of this as a familiar or traditional landscape, Mackey counters the illusion of the arches with lines that at times suggest a much more deep space, and alternately flatten the picture plane completely. The largest arch in this painting clearly appears to be in the front, setting up the illusion of a hallway with receding arches in the background. Yet, Mackey has extended the right leg of the arch off the bottom of the painting, removing the left leg's anchoring and making the picture seem to be flat on the right and to have depth on the left. These types of visual counterpoints run throughout Transient and much of the rest of her works.

Transient also employs a very small amount of colour, emphasizing notions of longing or history within the image by making the desaturated areas seem worn or faded. The aforementioned large archway in the foreground reveals hints of a brownish-gray, lending it the suggestion of wood or paint fading over time, contrary to the cold emptiness of the surrounding black. Likewise, the smallest arch, which appears to recede furthest back, has a slightly more saturated brown hue to it. This serves to both accentuate the depth of the space and allude, again, to time or history. If the foreground arch shows signs of having colour that has faded or worn, then the background arch seems newer, perhaps younger or less distressed. The black areas seem at first to be flat and simply painted. Closer examination, however, reveals delicate plays of matte and gloss application of paint to further complicate the tension between illusionistic and flat space.

Punk Pass (2009) also plays in the tension between illusionistic space and graphic flatness. In this relatively smaller work (10.5" x 22") is a similar allusion to a deep corridor countered by areas appearing very flat. The piece is framed on the right and left sides with the familiar blackness of the rest of this series. Then, on either side, two gray bands cut down from the top to the bottom and serve to further frame the image. It's as if you are looking through two columns closely cropped. The center square space that remains is where all the drama happens. A vague horizon line is subverted by overlapping columns and diagonals and seemingly hand-drawn lines describe objects in a recessed space. It is flat and dimensional at once, giving you more of a sense of what she is describing than a literal representation. The dramatic horizontality also lends Punk Pass a cinematic or photographic quality.

These elements combine for an effect akin to memories more than documentations. We tend not to recall exacting three-dimensional space. Rather, our memories are often fragmented amalgamations of many images and impressions. Mackey, then, is in the process of creating completely new spaces of her own. Alchemy indeed. 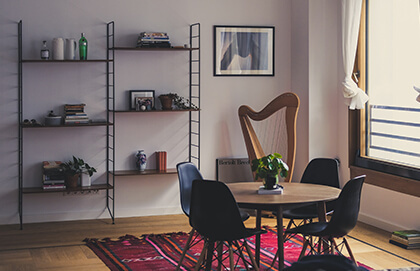 I Wanna Hold Your Hand: Finding Common Ground Between Religion and Philosophy