Facing limitless need and finite enthusiasm, from where can we draw impossible motivation?

A gripping scene in The Soloist is a moment of dark epiphany for the film's antihero protagonist, L.A. Times columnist Steve Lopez. Casting about for a story to fill his syndicated column, Lopez discovers that a homeless schizophrenic he's happened upon was once a virtuoso cellist named Nathaniel Ayers. Although Lopez has interest in little beyond good writing material, the clumsy relationship that grows between the two men slowly wakes him to genuine concern, setting Lopez on a quest to rescue Ayers from both mental illness and the streets.

After many false starts, Ayers seems to have finally turned a corner, accepting a rented apartment and playing the cello once again. But when Lopez asks him to sign some forms, Ayers's paranoia re-ignites. He seizes Lopez by the neck and drags him to the floor, thumbs nearly crushing the terrified writer's windpipe until Lopez finally wrests himself free and runs for dear life.

That evening, Lopez recounts the bitter story to his ex-wife. "The very person I was trying to be of some redeeming service to turns on me. I'm the enemy. Yeah, a stranger," he rasps in disillusionment. "And I don't know who to fault. I can't see any end to support a belief in anything worthwhile. I'm done trying. I resign. I resign from everything. It's official."

Emerging from this anguished sequence, the film seeks redemption as Lopez lowers his expectations, ferrets out his own condescending attitudes, and opens himself to being Ayer's friend even if he can't do much to help him. Ultimately, however, the fundamental question raised in Lopez's dark musings remains unanswered: Given the dismal outcomes of so many attempts at bringing justice and mercy, is there really any motivation that can keep us in the race for the distance?

Imagine yourself an anti-polio crusader in the early 1980s. This scourge disease has been wreaking havoc on humanity, especially children, for centuries. It decimates villages and paralyzes future Presidents. Hundreds of thousands are struck by it annually. Yet suddenly, amidst your passion and toil to battle the disease, a time-traveler arrives with shocking news: you will win! Despite the vast impact of the disease in that day, polio will be virtually eradicated within a few decades. In 2010, the number of new cases will have been cut from hundreds of thousands to mere hundreds. Wonder of wonder, miracle of miracles. Is this not cause for joyous celebration? Indeed it is.

But then, your friend-from-the-future turns somber. There is another virus you've never heard of before. In your day, some are calling the effect "slim disease," but few have any sense what is coming. Within a few decades, it will annihilate more people than polio touched in a millennium, eviscerating not just families or villages, but entire nations. Even as polio falls, AIDS is at the doorstep.

In such a world, the transition between charismatic crusader and bruised cynic is often brief. I've known many individuals, from foreign aid champions to evangelists of inner city renewal, whose once-bright eyes go dim when talk turns to human needs they once burned to address.

This is what I've observed. The ache and anguish of the world can be a powerful motivator, especially for an uncalloused conscience. It can drive us to heroic acts of sacrifice and service via guilt, duty, righteous anger, or noble enthusiasm. But ultimately, going up against the world's brokenness fueled solely by response to human need is like trying to cross the Sahara with a single canteen of water. Why? Because human need will always outstrip our enthusiasm to address it.

The problem is not that such impulses are impotent. Far from it. Sorrow at our own suffering or that of others can drive great undertakings, and well we should feel sorrow, weeping over human need as Jesus wept at the tomb of Lazarus. Guilt is a powerful force, and there is often good reason to heed its proddings more often than we do. Our innate sense of duty, too, carries great strength; only at our peril dare we defer obligations with the question, "Am I my brother's keeper?" Righteous anger can be mighty as well, and often is the only appropriate emotion to the world's injustice and suffering. Zeal for a great cause is a potent driver also, and we have every reason to set our sights on ending the world's great evils, whether they come of man or nature.

These motivators all carry great strength. They can nourish action for a very long time. But ultimately, they alone are not enough to sustain us across the Great Desert. Sorrow or guilt or duty or anger or zeal will never outlast need, because need is limitless. At some point, the sheer vastness of the heat and scorching sand will bring us to our last droplet of water, and we will be left to gaze across the expanse with sunken eyes and a mouth full of dust.

My daily work is the most purposeful calling I can imagine: to stir Christians to the plight of the orphan and help them engage effectively in response. It's no hyperbole to say amazing things are happening in this realm. I see Christians waking, passionate to "defend the cause of the fatherless," as Isaiah puts it. They are recapturing the reputation earned by the Church in its earliest days as a people specially known for opening both heart and home to orphans in their distress. Just a few weeks ago, more than 1,200 individuals from across America gathered in Minneapolis to learn how to build communities of adoption, foster, and global orphan care ministries in their local churches. It was nothing short of thrilling to see.

But here's the reality: there are roughly 15 million "double" orphans in the world by U.N. estimates. The number of children who've lost one parent ("single" orphans) is about ten times that, mostly fatherless, growing up without a provider and protector with poverty on one side and predators on the other. And while formulas based on "if every Christian in the world took in one orphanâ€¦" quickly resolve the need, we all know deep down that very few of the statistical Christians in the world are ready for that kind of sacrificial discipleship.

Don't get me wrong; the Church can make a profound difference, if even only a modest number of Christians come to share God's heart for the orphan. On the foster care front in the U.S., we're seeing that engaged churches carry the potential to find virtually every child in need of adoption a home. But, deep down, I suspect that this broken world will always have more orphans than there are homes ready to receive them. So what do we do with that? If motivation came from desire to "solve the problem" alone, I'd likely have given up long ago.

But there is another source. John's first epistle puts it clearly: "We love because He first loved us." That is the Wellspring. In the face of limitless need, there is one limitless fountain. Our love must flow from a deep and abiding awareness of His. This is why Paul prayed ardently that God's people would have power "to grasp how wide and long and high and deep is the love of Christ." It is the only source capable of nourishing us across the desert.

But then, how do we draw upon these waters? Is it merely a matter of "grasping" a new truth, somehow trying to gin up feelings or force long-known truths to migrate from head to heart? Certainly, the role of active choices here should not be underestimated. From Jesus himself and all the great Saints since, we see that practices of solitude, silence, prayer, study and meditation help reveal to us the heart of God in ways a passive "let go and let God" ethic never can.

But the testimony of those believers I most respect also makes clear to me that learning to be truly nourished by God's stance towards us is the journey of a lifetime. It is a long obedience, one that weaves together both our faithfulness and our failures, times of engagement and times alone, unshakable confidence and icy doubtâ€¦all undergirded by the God who is carrying to completion the good work He began in us.

Yet for today, to know unequivocally from whence our nourishment must come is no small victory. Even in this moment we can ask ourselves, What is it, really, that motivates the work I do for justice and mercy? Sorrow? Guilt? Duty? Anger? Zeal to overcome a great ill? There is a time for each of these to nudge us forward to action. But the truth is that anything we can accomplish by drawing from these motivations alone is far less than the work God has for us to do.

We would do well to ask also, To what do I appeal when seeking to motivate others to join me? This question may be the most revealing of all. For while we can rarely plumb the depths of our hearts, we often can see our own motivations revealed in the forces we call upon to motivate others.

If we are to go the distance, we must draw from a deeper Well. God invites through the prophet Isaiah, "Come all you who are thirsty, come to the waters . . . " In facing the needs I now engage—orphans in their distress—these waters are deep indeed. For we serve a God who sought us out when we were destitute and alone. He adopted us as his own. He invites us to call him Father, and to live as his sons and daughters. So we defend the fatherless because God has defended us. We seek to set the lonely in families because he set us in his. We care for orphans in their distress because he cared for us in ours.

Of course, the same is true of every aspect of human need. The God who provides both our daily bread and the Bread of Life calls us to feed the hungry. He who healed sickness of both body and soul invites us to tend the diseased as well. The One who sought us when we were in bondage to selfishness and sin beckons us to visit the imprisoned and enchained.

If we wish to stand for justice and mercy for the long haul, no other nourishment can suffice. As we enter the boundless desert, it's the only Source that will never run dry. Whether facing AIDS or addiction, poverty or human trafficking, it is the only hope we have for finding ourselves, decades down the road, still "bearing all things, believing all things, hoping all things, enduring all things." We love, quite simply, because he first loved us. 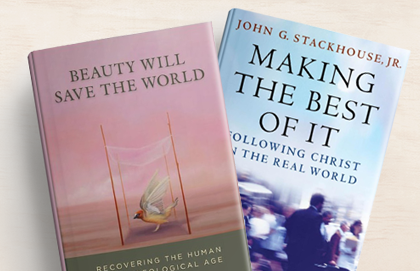 The church has awakened to its missional identity—and its responsibility to witness without exacerbating the tensions of our world.