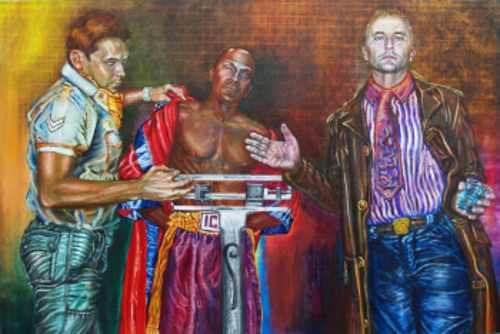 The weigh-in is a crucial moment before any fight. It establishes the pretext of a fair contest, assuring that both fighters are within the same weight class, and also provides the platform for the first public viewing of the fighters prior to the match's beginning. The robes come off and the man is revealed. The moment carries with it an undeniable anticipation of violence. The honed, conditioned boxers weighed in face certain pain, sweat and blood momentarily in the ring.

As such it is the perfect scene to represent the fifth Station of the Cross, Behold the Man, where the Roman governor Pontius Pilate presents Jesus before the assembled Jewish community. In its manner of perspective, the work reflects the historical setting, as Jesus was presented to the Jews, who waited outside the Roman palace to avoid ceremonial uncleanness, presumably from a balcony. We share this viewpoint, looking up at the boxer as he is weighed in.

The figure of Pilate is represented by the ostentatiously dressed manager, whose purple attire evokes the power of imperial Rome. Pilate is alluded to further in the lituus symbol adorning the scales, an object featured on Pilate's coinage, derived from the shepherds staff but now ironically aligned with the Good Shepherd in an allusion to the intersection of earthly and heavenly kingdoms. The empty glass held by the manager symbolizes his guilt in the coming affair. He has fixed the fight, and demanded that the boxer take a fall in the twelfth round. There is no water with which he can wash his hands of his involvement in the scheme. Similarly, although Pilate tried to symbolically wash his hands of the conviction of Jesus, his guilt was not expunged by that action. The Roman governor was just as responsible for Jesus' death as the crowd in front of him.

Jesus' Roman guard is represented by the assistant weighing in the boxer, simultaneously removing his robe and sliding the weights. His actions quote those of the guard in Caravaggio's Ecce Homo who disrobes Jesus after the mocking. His light-toned garb contrasts with the predominantly dark attire of the manager, symbolizing the two extremes to which Jesus will soon go, from struggling with death in the depths of hell to ascending to the right hand of the Father in heaven.

The boxer's steady gaze convicts the viewer of his own complicity in the coming events. From our position we could easily be betting punters, whether aware of it or not, about to profit from the imminent act of injustice. Just as the manager's unrepentant, perhaps arrogant stance and absence of water prevents any pretense of innocence we find ourselves confronted by the piercing eyes of the boxer, unable to escape our conscience, morally isolated in a crowd of one, for all we know. 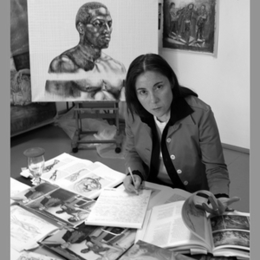 Miriam is the first Australian artist to win The Annual International Religious Art and Architecture Design Awards for Visual Arts. During June the 2010 National Convention of the American Institute of Architects (Miami, Florida) exhibited her award winning entry and became the springboard to represent Australia's rich cultural life.

Shock "vs." Awe: The Art of Christian Worthington