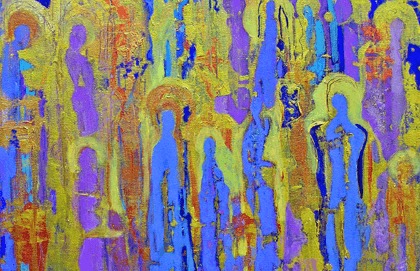 Apprenticing Ourselves to the Past

Today the past is something you overcome, a regrettable territory you escape for the greener, progressive pastures of modernity and the enlightened shores of the present. It's precisely why so many people are flabbergasted by the inanities of the past year. "We're better than this," we tell ourselves, and dismiss "them" as unevolved. Conversely, even what passes for "conservatism" today is allied to creative disruption and readily dismisses the good things we've inherited. The strong man arrives with vague, cynical promises to "return" to something while disdaining the people and principles that precede him.

Such narratives of ascent or revolution require shaking off the dust of your old friendships, detaching yourself from the embarrassing clans that birthed you ("those people"). Like Jay Gatsby, we imagine estrangement is liberation.

In the bright shiny light of the enlightened present, your old friends can get you in trouble. To hang out with characters from the past is to be guilty by association. That you'd ally yourself with people who don't share your contemporary tribal sensibilities is a sign of your own poor judgment and even irrationality. So when, for example, you tout that you're dedicated to the renewal of North American social architecture "drawing on two thousand years of Christian social thought," your interlocutors will not only be puzzled, they'll be suspicious. (In such an environment, voices from the fifth century to the 1950s are all dismissed as "ancient.")

Needless to say, such sensibilities make it pretty hard to be a Christian since Christian faith entails allegiance to a first-century Mediterranean Jew who rose from the dead. The church is that peculiar people that submits itself to the authority of the ancient tribes of Israel, heeds the words of very un-PC apostles like Peter and Paul, and keeps listening to ancient North African bishops like Augustine.

But of course that's exactly why we refuse such presentism and chronological snobbery. Far from being a merely defensive measure, we take such a stance of resistance for the sake of the present: we believe the wisdom we need to live into complicated futures is found among forgotten friends—that the people written off as personae non gratae by our contemporaries offer neglected perspectives that can give us fresh insight into contemporary problems. This is a fundamentally different epistemic posture: a hungry humility that goes looking in the past for help in the present, having faced up to the poverty of our so-called Enlightenment. It is an instance of what Alan Jacobs has described in these pages as "filth therapy": "a kind of historically aware intellectual pluralism, a willingness to learn from and make use of the past, and especially those elements of the past that have been discarded by modernity as refuse and waste." In short, we believe that associating with ancient friends, far from being a liability, actually gives us a wider vantage point—a competitive edge in the pursuit of wisdom and truth.

This isn't an antiquarian wish for "the way we were." To the contrary, it is precisely the distance of ancient friends that can give contemporary Christians a long view to discern what is perennial: the challenges and frustrations that attend our recalcitrant human nature, as well as the forgotten truths that speak to every age. The centuries can work like a sieve to sift out what really matters from the blur of an overwhelming, even blinding present.

Ancient friendships can also be orienting. Our relationships with our ancestors tell us where we've come from, and also show us where we are.

In a recent essay that has the audacity to redeem the Puritans in our public imagination, Marilynne Robinson makes a similar point: "We have been busy destroying the landmarks that might otherwise help us orient ourselves. We have impoverished ourselves of every sense of how, over time, a society emerged that we and most of the world have considered decent and fortunate." Which is why, since The Death of Adam, she has been drawn to older voices that have been not only forgotten in the academy but also anathematized: figures like John Calvin and Jonathan Edwards and the Albigensian martyrs. "I confess to being drawn to orphan figures, movements, and periods," she says. And so she sets out to reclaim the Puritans: "The polemic against the Puritans has simply been done to death, a cultural tic which is mindless yet full of consequence because it leaves us without any sense of the origins of elements of our culture that we should be aware of, so that they can be valued and perpetuated, and so that the impetus behind them can be understood."

Ancient friendships are the distant, orienting stars by which we navigate the roiling waves of twenty-four-hour news with all its upheavals and outrage. Think of this issue of Comment as your sextant (or, if you prefer to update the metaphor, a GPS device): we want to introduce you to a constellation of forgotten voices that have oriented thoughtful Christians across the centuries and who continue to offer wisdom to our age, if we'll listen.

But it's really an invitation to find new friends. So the authors in this issue introduce us to an array of thinkers and practitioners to whom they've apprenticed themselves. Speaking from the front lines in Charlottesville and the trenches of a transplant unit, authors like Yuval Levin and Karen Marsh will introduce you to the friends who have sustained them in their work across a broad spectrum of vocations. You'll meet some new friends—people like Sophie Scholl or Moses Mendelssohn or the Cappadocian fathers—likely for the first time. But you'll also be reintroduced to familiar names like Gerard Manley Hopkins and Martin Luther King Jr. and see how a poet helped a physician learn how to see, or how a civil rights preacher-activist birthed a passion for justice in a pastor. We hope these are just a first encounter that will leave you looking for ways to continue the conversation.

The constellation of forgotten friends here is far from comprehensive, but we hope it showcases a posture, turning your attention to treasures buried in the past. This sense of posture reminds me of a vibrant picture of what we’re talking about. In the Cathedral of Our Lady of the Angels in downtown Los Angeles, where one normally expects stained glass you will find a collection of moving, realist tapestries that visibly portray the communion of the saints. It is a global array of past and present where Bridget of Sweden rubs shoulders with Boniface, Agnes prays alongside Aquinas, and intermingled with them all are unnamed Angelenos of past and present, in common worship and hope, oriented to the altar and the future together, co-pilgrims on the Way. This issue of Comment is an invitation to that communion, to join that pilgrimage.

Power broker, or salt and light?