For a while, sometimes, worrisome responsibilities scurry away from the light, replaced by nothing but big sky above.

More now than before, there are times when the anxieties abate, when God's graces chase them into the shadows and the dark little corners that nurture them.

There, along with their fellow travelers—worrisome responsibilities, doubts, finances, the voice that likes to shout "we know you don't you belong here!"—they huddle and whisper, gathering strength in numbers as they plot their return like so many of Tolkien's orcs.

But for a while, delightfully, they are all comfortably dispatched and replaced with the feeling of soft, cool grass on my back, the heat of the sun on my chest and nothing but big sky above. I used to do this when I was a little boy in Edmonton in the days when there were just two TV stations and the only mobile technology available (transistor radio) was also the sole preserve of leather-clad, acne-scarred teenagers smoking and listening to rock-and-roll. They were, in my memory, impressive and intimidating figures.

Mother would—as more mothers should but hardly any do anymore—toss me outside from under her feet to "go outside and play." (For the record, in the winter she would ensure I was properly clothed beforehand. But I was still tossed.)

Sometimes, there was no one to play with. The Hollands might be on vacation. Robbie Campbell, who once whacked me over the head with a two-by-four, tended to fall out of favour. (I appealed for justice for this outrageous, unprovoked assault to my Dad and he suggested I handle matters myself by punching Robbie in the nose to settle the affair and sent me out the door to do so—but those were happier, simpler times for men.)

In one summer, Denis down the street had moved back to Quebec, and Per's family had returned to Norway, and so I would head to the ravine to catch tadpoles in a jar. But even this effort to endanger species and degrade the environment got boring after a while for a freckle-faced youngster. The tadpoles never seemed to live very long in the jars, anyway, and dead things are pretty uninteresting after you've poked them with sticks and run away a few times.

So I would lie down on the lawn and stare at the heavens. It was a nice, big suburban lawn that provided a modicum of compromise for a rural postwar generation beginning Canada's transition to an urban society. Back then, it was wonderful. It offered time and space, which only football and hockey coaches speak of today, but are as necessary to intellectual and emotional achievement as they are to athletic accomplishment. Today the structures that helped promote those virtues—time and space—are seen only as examples of urban sprawl, which is of course a terrible thing. Empty time is unproductive, space is avaricious. But you don't need me to tell you that.

In those days, though, a half century ago now, the lawns in the new suburbs of southeast Edmonton seem to stretch as far as the big blue Alberta sky above them. And there I could lie on my back in the sun and watch as God's hand shaped the clouds. It is easier now to hear his voice when there is not so much noise.

Some clouds were castles. Some were great ships at sea. Others, the big puffy white ones mostly, were angel fortresses protecting us from the big, angry looking ones that rumbled like a bowling alley on the horizon. That's where the orcs live. I could watch that battle for what probably wasn't but felt like hours, delighting in the adventure unfolding through pure imagination. No mobile devices existed or were required. Somewhere, perhaps, some other boy was on his lawn, staring up at the sky and imagining them.

I did this again from time to time when I was a teenager in England, although I had acquired acne and a transistor radio and was both impressive and intimidating. I could actually sit on the roof outside my bedroom window, which I did. It made me feel cool. Hip, even. And I think I did it on occasion in university in Nova Scotia. I probably did it again from time to time over the years; I can remember one time, when I returned to playing soccer in my thirties, just rejoicing in the feel of the grass under my feet. But for the most part the little boy and his imagination didn't go outside to play very much.

Life is still busy. But now and then, there is more time. Now, more than before, the anxieties and their fellow travelers scurry like cockroaches away from the light, and the boy and I meet again. It is good to talk about old times, to share the grass, the sun, and the fortress of angels. 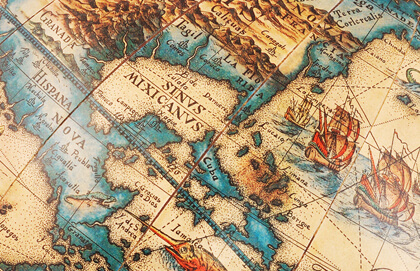 Connecting the dots in our lives.

Will it Be Coffee, Tea, or He?