Putnam's important book points to a sobering assessment of the integrity of American religious belief and practice. 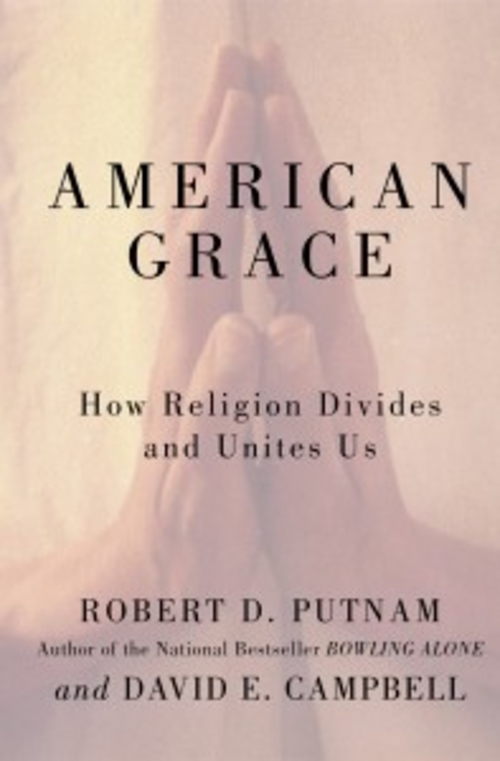 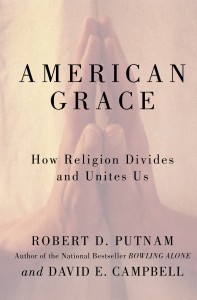 
King Solomon, however, loved many foreign women besides Pharaoh's daughter . . . As Solomon grew old, his wives turned his heart after other gods, and his heart was not fully devoted to the Lord his God, as the heart of David his father had been.
—1 Kings 11: 1, 4

Relationships matter, for they shape our loves and our loves direct our lives.

Scholarship is sometimes viewed as thinly veiled biography. Putnam and his co-writer David Campbell's life stories reflect many of the book's conclusions. Putnam was raised in an observant Methodist home, but later converted to Judaism at marriage. His children were raised as Jews. Putnam is best known for his book on social trust, Bowling Alone: The Collapse and Revival of American Community (2001). Campbell was raised a Mormon after his mother converted from Catholicism. His Protestant father eventually converted to Mormonism as well. The authors' life stories reflect the "religious churn" that is so common in American religion, a churn that is the central theme of the book.

American Grace is largely a statistical study of the changes in American religion over the past fifty years, but descriptive congregational vignettes illustrate the points being made analytically through survey research. For a study of its kind, the book is extremely readable, filled with interesting nuggets and factoids, and sweeping in its scope and conclusions. Although its focus is predominately on the U.S., the analysis has relevance to the entire North American religious scene. His central question is "how can religious pluralism coexist with religious polarization?"

Putnam finds little decline in levels of American religiosity: "In terms of private religious behaviour one finds virtually the same rock-steady levels of religiosity." Unlike Hunter, he uses aggregate individual statistics and does not discuss the institutional social location or cultural capital these religious beliefs have in public life. Hunter might retort that even if individual religious fervour is high, its social location has radically shifted from the past, as religion today is treated as a kind of personal hobby.

Putnam uses a seismic metaphor to frame his analysis: an earthquake with two major aftershocks. The earthquake was the Sixties, which "represented a perfect storm for American institutions of all sorts—political, social, sexual, and religious."

The first aftershock began in the 1980s with an upturn in religiosity, characterized by the alignment of religiosity and conservative politics. To Putnam, the rise of the Religious Right was a cultural aftershock stemming from the upheaval of the Sixties.

This in turn was met with another aftershock beginning in the 1990s and 2000s, where young Americans became disaffected with religion because of its political orientation—a reaction clearly described in David Kinnaman and Gabe Lyons' Unchristian: What a New Generation Really Thinks About Christianity. "Young Americans," reports Putnam, "came to view religion as judgmental, homophobic, hypocritical, and too political." The consequence of this second aftershock is a large disaffection of young Americans with religion. Today 20 to 30% of post-boomers identify themselves as religious "nones." The distinguishing characteristic of these new nones among the millennials after 1991 is their stance on homosexuality.

This is the big picture framework of the analysis: an earthquake with two aftershocks. This recent alignment between religion and partisan politics is historically unique, though it has characterized the entire lives of post-boomer youths. "Religiosity has partisan overtones now that it did not have in the past. While there are exceptions, the most highly religious Americans are likely to be Republicans; Democrats predominate among those who are least religious," says Putnam. Saying grace at meals corresponds highly to partisanship, he finds. "The creation of a new coalition of the religious represents a major change in the foundation of the American political system," and the God gap is widest for those under the age of 35.

Religiously-fueled partisanship is historically a dangerous mixture. In his Before the Shooting Begins (1994), sociologist James Davison Hunter suggests that culture wars can become much more volatile. Europe's Wars of Religion loom large in the collective memory. Putnam claims that this is not a likely danger in America. First, Putnam sees the current religious coalition unraveling in the coming years as the issues that fueled it wane in importance: specifically, homosexuality is becoming accepted by most Americans while attitudes toward abortion are being met with ambivalence. Putnam sees these partisan issues losing their galvanizing force. The guns are being holstered.

However, there is an even more pervasive reason Putnam believes partisanship will decline: the everyday lived experience of pluralism. The high degree of intermarriage, consumer attitudes toward religious choosing, and growing religious diversity of individuals' immediate social networks have tended to mute religious conflict in America. In short, lived experience has trumped theological boundaries. Americans continue to be religious, but the sharp edges, particularly absolute attitudes of exclusivity, have been worn off. This is, in Putnam's mind, America's saving grace: "When Americans associate with people of religions other than their own—or with people with no religion at all—they become more accepting of other religions." Solomon's wives come to mind.

These findings may be a comfort to Harvard public policy professionals, but they are hardly a comfort for orthodox believers. It is an indictment more than an encouragement to the church. American Christianity has never been very belief-oriented. In general, theological rigour, comprehension, and concern have declined since the early 19th century. Religious conviction has become a consumer choice riddled with expressive individualism and couched as therapeutic self-help—the church of Oprah.

In large measure, the evangelical church has served as an accelerant to these tendencies: "The United States has conservatives aplenty, but it lacks traditionalists, if for no other reason than so many religious conservatives are the inventors of new forms of religious practices." Hip and relevant, evangelicals have simply followed the 1980s over-reliance on politics, and now the 2000s tendency to live and let live. The immediate cost outlined in this study is the loss of the coming generation. Putnam finds that the retention rate of religious nones is higher than that of all major religious traditions. Church members are not passing on their faith to their children.

Another sobering finding is that while high-octane rhetoric has been devoted to the issue of same-sex marriage, an issue relevant to only a small faction of the U.S. population (the CDC reports about 2-3%, some figures are as low as 1.7%), huge shifts have taken place on attitudes toward sex before marriage—what the Bible calls fornication: "The best evidence is that the fraction of all Americans believing that premarital sex was 'not wrong' doubled from 24% to 47% in the four years between 1969 and 1973 and then drifted upward through the 1970s to 62% in 1982." Today attitudes toward sexuality are the best indicator of church attendance. It appears that many in the church have taken their eye off a far more pervasive problem among a far larger number of Americans.

So Putnam's cheery "faith without fanaticism" may play well in Boston and in the halls of academia, but in many quarters it sounds closer to "faith without truth" and is a sobering assessment of the integrity of American religious belief and practice.