Creativity and technical facility are not enough, in and of themselves, to achieve professional excellence... I first saw evidence of this during my college years as I followed the academic progress of my peers who were studio art majors. By their final year only a handful were truly ready to be practicing artists.
by David Bruce Hegeman

Creativity and technical facility are not enough, in and of themselves, to achieve professional excellence in the plastic arts and fine crafts. I first saw evidence of this during my college years as I followed the academic progress of my peers who were studio art majors. By their fourth (final) year it was clear that only a handful of students were truly ready to be practicing artists while the others were not. It was not as though these students were more talented or had deeper aesthetic insights than their fellows (in some cases this was decidedly not the case). It was not even that these students worked harder than their peers (although they often did). What set these students apart and made them ready to be true practitioners of their craft was their follow-through: they diligently continued on their pieces until they were truly completed. Whether they were working in a detailed, realist manner, or in a minimalist non-representational mode, they brought a strong sense of finish to the process of making art. They began with definite objective for their art works and they persisted at their task until they had realized it. Their clear understanding of finish distinguished them as budding professional artists.

The idea of finish carries with it the notion of completeness or perfection, and attention to every detail. Finish has always been a key element of true craftsmanship in the West. Finish epitomizes quality. It is rooted in the Judeo-Christian worldview (although it is celebrated in other cultures as well). The God of the Bible is deeply concerned with crafting his creation. Yahweh is pictured forming the land ( Ps. 95:5), the beasts ( Gen. 2:19), and Adam ( Gen. 2:7) in the same way that a potter forms vessels out of clay ( Rom. 9:20ff). God in other contexts is depicted as a weaver ( Ps. 139:13), a builder ( Eph. 2:20) and a goldsmith ( Mal. 3:3). God intimately crafts his creation filling it with glorious diversity ( Ps. 148), exquisite details ( Mt. 6:28-30), and elegant, fitting designs ( Job 40-41). And in a grand finale God Almighty brings creation to a climactic completion ( Gen. 2:1) having seen that it all is very good ( Gen. 1:31). Yet God in his wisdom finds a way to finish his good creation in such a way that it can be further dressed and embellished by his image bearers ( Gen. 2:15) and be brought to an even greater state of glorious perfection ( Rev. 21)! "Perfection" or "completeness" are key biblical concepts (the two terms are used interchangeably):

Completing our art works is one way that we imitate Our Father's creative activity in our craft.

Just as God's creation began with his planning out beforehand all that he intended to do in creating a delightful world for us to inhabit, so we in turn must plan out our own works beforehand (at least in a general way). God's goals in creation were measured in terms of his own good character. Likewise, we must have appropriate standards of artistic excellence to measure and guide the making of our works ( Phil. 4:8 is a good place to start). It is interesting to note that "finish" is often associated with the surface of things, but high quality finish is never merely superficial. A great deal of underlying work goes into making the finishing details right. A deep, glassy table-top finish begins with the selection of the wood before it is ever cut or milled. Then comes hours sanding, staining, applying layers of varnish, still further sanding, etc. The finish of an art piece or craftwork comes not from how one ends a work, but from how one begins and continues the project. Finish grows out of artistic perseverance.

Finish was once expected in all forms of craftsmanship—artistic and otherwise. Its value was deeply embedded in the tradition of the Medieval Guild system which formed an historical backdrop for all the fine arts and handicrafts of the West. Besides watching out for the economic interests of its members, craft guilds paid strict attention to the quality of the creative output of guild members through an elaborate set of rules regulating every aspect of the trade. The guild strictly enforced which materials were to be used, the processes followed in the making of goods, standard sizes and weights, and the price of wares. Regular inspection by the guild's wardens, along with peer pressure from the other members of the guild, ensured that the rules were followed. Quality was also the result of a rigorous training process as craftsmen advanced from apprentice to journeyman, and, finally, to master. This process could take ten years or more to complete, during which all the skills of the trade and the standards of the guild were learned. The final step to becoming a master was the submission by a journeyman of a "master-piece" to the members of the guild, who would determine if the work sufficiently demonstrated that he or she had achieved "mastery" of the craft. Only then would a member of the guild be given the privilege to sell goods directly to the public.

It was inconceivable that a master would ever try to sell a piece that was only partially completed or that was executed in a haphazard manner. Meticulous attention was given to every detail and every step of the manufacturing process was carefully followed. This was especially true of the finishing details of a work. The finishing details demonstrated to a buyer that care was invested in the entire fabrication of the piece to be sold—even those things which were not readily apparent. It could be said, then, that a chief aim of the guild system was the prevention of all shoddy and incomplete workmanship.

With the gradual rise of capitalism after the Renaissance and the advent of the industrial revolution, the importance of craft guilds waned and they all but disappeared by the end of the nineteenth century. This new era brought with it new problems of quality regarding the finish of goods. At first the goods manufactured in factories were markedly inferior to handmade wares. In many cases they were ugly, ill designed and grossly inconsistent in quality. This gradually changed by the middle of the nineteenth century as production methods improved and a greater level of consistency was achieved. Ironically, the unrelenting uniformity of factory wares spurred a new Romantic reaction: critics such as John Ruskin lamented the cold perfection of industrially made goods denuded of all "human" character. He passionately argued that factory-made goods should at least have the appearance of being handmade! (For quotes of Ruskin, see Charles Packer's article in the summer 2003 issue of Comment).

With the craft guilds gone and small workshops abandoned, who was responsible for quality of manufactured goods? Where were the standards of finish to come from and who was to enforce these standards? The factory owners? The (largely) unskilled workers? The Government? Market forces? This was a problem that desperately needed to be solved. When factory owners came to realize that their goods really were shoddy, the initial reaction was to solve the problem of poor quality by technological means (it was seen as an engineering problem). Better machinery and processes would improve the quality of finish and increase productivity at the same time. But the results—well made, functional goods—were cold and austere. It was not until the emergence of industrial design (a synthesis of artistic/aesthetic and engineering/technological disciplines pioneered by the Bauhaus in the 1920s) that the problem of quality and finish was satisfactorily solved in the industrial setting. Finish became primarily the designer's responsibility. Industrial designers (teamed with engineers) were charged with planning every step of the manufacturing process to ensure that the end result was beautiful and functioned well for its intended purpose. The expected result of good design was a high degree of finish.

The dissolution of the guild system also led to a crisis of quality in the fine arts. At first the standards for artistic quality were determined and enforced through a new institution: the art academy. National art academies were formed in the 17th century and were tied to the newly emerging nation-state. They promoted an "official" style of art typified by noble subject matter, polished surfaces and careful compositions. Although the academies promoted rigorous training and exacting standards, they allowed artists more independence than the members of the craft guilds enjoyed. It was at the height of the academic movement that the term "high finish" became applied to painting and sculpture. Eventually even the academy lost its place as the arbiter of quality and this responsibility became the artist's alone to maintain. This coincided with the rise of avant-garde artists who saw themselves as autonomous—free from all traditional formal constraints. The quality standards of the past were now consciously challenged and often brazenly discarded. How was one to be able to determine the quality of art works in such a climate? Who was qualified to make aesthetic judgments?

This brings us back to the crisis of (most) current-day studio art schools. Emphasis on personal expression, radical innovation, conceptual and theoretical issues dominate the post-secondary studio art scene. Developing a corpus of finished art works, or even a personal, clearly articulated art style or approach to art-making is at best a secondary concern, and at worst, neglected altogether. (The notable exception to this is the teaching of design and the fine crafts—metalwork, pottery, fiber arts, fine woodwork and book arts—in which a high degree of finish is still expected.) Yet the overwhelming majority of successful contemporary artists still maintain a high degree of finish. This is often not readily apparent (especially in "conceptual" art). Art works such as Damien Hirst's large-scale colored spot paintings seem childishly simple to execute, but depend on a flawless, near platonic perfection (clean edges, even application of paint, no slips or runs) in order to achieve their cool, laconic tenor. Anselm Kiefer's raw canvases, on the other hand, are equally deliberate: rough brush strokes, drips, scrapes and blobs of paint are orchestrated into a powerfully emotional composition entirely in keeping with his intense subject matter. Art students who are able to see the deliberate, finished quality of these art works and bring this sense of completeness into their own art works will in turn make their work much more "sellable". Although there may be no accepted rules on what constitutes a "finished" art work in today's art scene, works which have a discernable sense of finish are nevertheless taken far more seriously by curators and art collectors. The rules governing finish can only be stretched so far before they break.

Dave Hegeman is a librarian and writer in Newberg, Oregon, and does watercolours whenever he can. He is the author of Plowing In Hope: Toward a Biblical Theology of Culture (Canon Press, 1999). 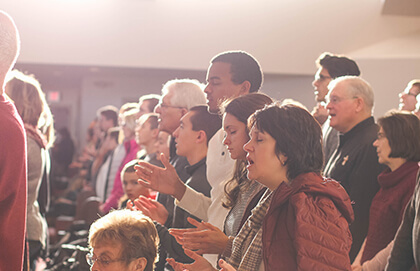 Looking the Question in the Face

We've grown so very comfortable at worshipping with each other. But what happened to singing to each other?

Twelfth in an expert series of must-read books.