Frozen River and the human condition

The eternal dynamic of evil, guilt, and mercy gives Frozen River its spine. It is not a perfect film, but somehow even its flaws lend it credibility and authenticity as a portrait of the weakness and grandeur of the human heart. This is the oldest theme in literature, but it is also the most important, a fact that the last eighteen months of American cinema have shown. 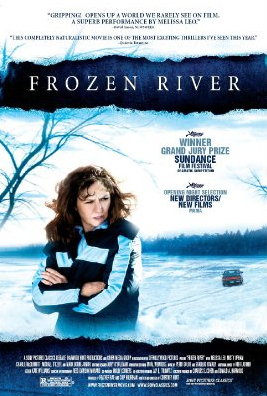 At the opening of Courtney Hunt's Frozen River the camera tilts slowly and patiently from a woman's cigarette, up the cracked, winding contours of her weathered frame and finally comes to rest on her hardened, tear-stained face. She's at once stone, glass, and water, and we need no words or dialogue to understand her. We know, through our own experience, that she is both strong and weak, physically, emotionally, and spiritually. She is a grand tangle of virtue and vice, aspiration and disappointment, full of self-love, self-loathing, and love for others, all at once. In other words, she's thoroughly human, and this is the great strength of the film. Other shots will chart the magnificent and foreboding dimensions of the frozen St. Lawrence River, but they are but echoes of this initial image, mapping the human soul.

The "Everyman" character goes far back in literature. There is even a famous 15th-century play by that name, where one character represents to us the whole: the vice and virtues, the enormous, miraculous strengths and tragic, shocking weaknesses of what we are.

But how unusual for a woman—an Everywoman—to stand in that place for us. This is a telling and oft-discussed (but rarely remedied) truism about lingering sexism in American films. In a recent interview, the actress Melissa Leo said she feels gratitude to Ms. Hunt for giving her a complex leading woman to portray. And "portray" is too clinical a word; Leo inhabits the character, with abandon, sparing no thought for her Hollywood image. Her character, Ray Eddy, elicits our sympathies for all her troubles (deadbeat, gambling husband, poverty, few prospects, two bright but haunted children), but also our disdain for her bigotry and lack of resolve in the face of temptation. Leo's interviewer mentioned Ray's bigotry, then backtracked, saying "well, maybe 'bigot' is too strong a word." "No," Leo responded quickly. "It's OK to call her a bigot." Eddy sees herself morally superior to her husband, who is addicted to gambling and has deserted the family, and a notch above the American Indians that share her town. Before long, under desperate circumstances, she finds herself gambling her very life on the frozen St. Lawrence, a young Indian trafficker named Lila at her side. Lila (Misty Upham, in a wonderful performance) and Ray have more in common than either would like to admit.

And this is where Frozen River hits its stride, right at the scorched earth of judgment. Those tedious drives across the fragile ice—rootless, searching human beings, with all their hopes and fears, in the trunk, racial tensions in the front seat—provide moments of enormous tension and great soul-searching. Everything hangs on the edge of disaster. Should that battered sedan fall through, we will reckon it judgment for the heartlessness, racism, and general greediness that underlies the human trafficking industry. But we will also shudder at the thought of drowning innocents, and forcibly step away from two desperate traffickers we've come to recognize and love.

Hunt doesn't permit us a comfortable position from which to pronounce judgment. She has slipped us into Ray's trailer, introduced us to her children, rolled her camera over every worn piece of mismatched furniture, neglected grease spot and mildew stained wall. We all have dust atop the furniture, mold behind the walls, and so Hunt's affinity for detail keeps us from judging Ray too harshly, lest we find ourselves in the dock.

Indeed, the eternal dynamic of evil, guilt, and mercy gives Frozen River its spine. It is not a perfect film, but somehow even its flaws lend it credibility and authenticity as a portrait of the weakness and grandeur of the human heart. This is the oldest theme in literature, but it is also the most important, a fact that the last eighteen months of American cinema have shown. When it comes to the nature of evil in the world, a few other films are worthy of mention here, as Frozen River complements them all, and, in a way, answers them.

Joel and Ethan Coen's No Country for Old Men shows us a brutal universe, where killers and smugglers dance to a deadly tune. Is there anyone good in this film? Not really. Tommy Lee Jones plays a policeman who is more tired than virtuous. Josh Brolin plays a "normal" man in bad circumstances, but the efficiency with which he kills to survive outlines the calloused husk of a soul that has seen too much evil. Chigur, played by Javier Bardem, is barely human, a killer for hire. We get the sense, near the end of the film, that there might be a chance of redemption for him, but evil is less a choice for Chigur than a calling; he is made for the job, an angel of death. The film gives us the stark fact of evil, and won't let us turn away.

P.T. Anderson's There Will be Blood focuses on one businessman who appears, through much of the film, to simply be the archetypal American businessman. Success drives him, but he also employs people, provides for the community, and adopts a dead worker's orphan son as his own. But greed will work its dark machinations, as it always has. It is not clear, by the end, if the man did all he did for his own gain, or if there was a glimmer of altruism there. Probably both. But it's clear his "virtuous" opportunities were moments of grace extended to him, and, as in a Flannery O'Connor story, that grace is most often squandered, twisted, and discarded. Anderson, with help from Daniel Day-Lewis' astonishing performance, shows us the blindness to grace evil can engender.

Michael Haneke's remake of his own film, Funny Games, unites the familiar face with the most savage, incomprehensible kind of evil. Two teenagers, posing as kind neighbors in a community of vacation homes, hold a family hostage and torture them to an unimaginable degree. What sets Haneke apart from the standard horror movie director is that he understands something of human nature and never plays to the audience's sadistic tendencies. These two young men embody the magnitude, the allure, and the mystery of evil itself. We don't understand why God would allow so much senseless death and misery in the world, and the boys give us no answer, there. But they force us to reflect on our role in the whole tragic play. In one telling moment, one of the boys stares into the camera and rewinds his own scene, as if to implicate us, to remind us that we are watching from the comfort of our padded chairs, while the horror unfolds. It's only a movie, we say. Exactly, Haneke responds, and you paid to see it. Now ask yourself why.

Frozen River caps off this quartet with a return to humanism, but not of the naïve variety. We emerge from the film believing that evil has dramatic consequences, but it is possible also to glimpse the grace extended to us, the moments where we do not receive all the judgment we deserve. This is quite different from the Hollywood formula where all things work out well for the protagonists in the end. In that equation, the happy ending assures us of our own self-righteousness, and the wisdom of our entertainment investment. In Frozen River, rewards are not merited, and judgment is not entirely absent. Like much of life, things are broken and we're all muddling through. But like the old carousel sitting silently through much of the film, some things can be oiled and repaired.

Together, these films form a complex portrait of ourselves and the darkest regions of our hearts. If we are honest, we will acknowledge them. If we are courageous, we will go there and speak the truth to ourselves. Frozen River takes us out on that fragile ice of moral peril with those women, and we're forced to remember that human souls—even our own—are hanging in the balance.

In the biblical book of Job, all conceivable answers to the problem of evil are addressed and dismissed for what they are: ultimately unsatisfying. This is partially because evil is a mystery—our own mystery—but also because it is not a rational, quantifiable thing. It is dynamic: what happens when a soul abandons God, even for a moment, and knocks the universe off its axis. It is an experience, profound, tragic, and universal. At the end of the book of Job, God does not answer the problem of evil. But God shows up, and that is enough answer for the repentant, broken man for whom the book is named. There Will be Blood, No Country for Old Men, and Funny Games clarify and define the problem, but Frozen River alone acknowledges what so many of us have come to know. The Creator can intercede, even when we find ourselves perched atop the water, on the verge of falling through. 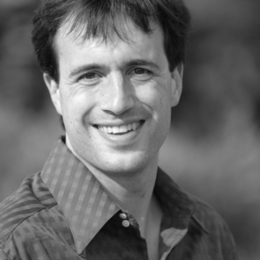 Joseph G. Kickasola is Associate Professor of Film and Digital Media at Baylor University and author of The Films of Krzysztof Kieslowski: The Liminal Image (Continuum Press, 2004). He lives in New York City, where he runs the Baylor Communication in New York program.

Finding our way to great work: Vocations in media

Film sets, like every workplace, teem with challenges and opportunities.

The Big Fix: Inside Job and Immoral Collusion