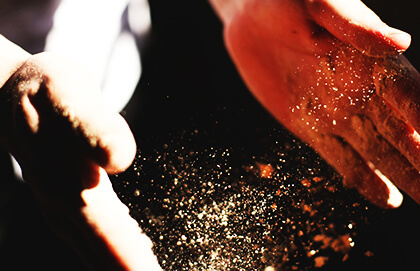 Sitting to the right of Jamie Oliver’s 15-Minute Meals, slick with glossy images of lamb tagine lying seductively amid cherry red tomatoes on a bed of golden couscous, and Mastering the Art of French Cooking in its regal, white fleurs-de-lys on a teal jacket, is a small, brown, paperback cookbook.

The book, More with Less, is produced by Mennonites and looks like it. Its jacket, its design, its recipes, even its font, exude—how else to put this in an age of food porn—chastity from cover to cover. There are no pictures, just “recipes and suggestions by Mennonites on how to eat better and consume less of the world’s limited food resources.” Oh, and it comes with estimates of how much each meal is likely to cost you, and tips on how to stretch your Monday-night roast chicken into three, maybe four, meals.

It is a book that exudes not just chastity, but economy. And that’s why I love it. Now don’t get me wrong: I’m a charter member of a cooking club that has prepared multiple-course meals from the French Laundry. So it’s not that I hate the highfalutin. It’s that More with Less perfectly exemplifies the kernel, if you will, of economic life. The emphasis in the book’s title, as it should rightly be in economics, should always be on the More. The aim of economic life is to carefully use just enough, and not any more resources or—and this is equally important—not any less. And the whole point is so that we might have more life. I find the book’s title to be a perfect metaphor for the field of economics, but also of the goal of my work at Cardus, where I study how labour, capital, and institutions combine to shape our world. Economics is an exploration of how we, as humans, can use resources to produce more or less life, more or less culture, and in so doing, we might become better humans, or worse by our failure to do so. I think of my work on banal topics such as public procurement, or labour supply, or minimum wages, or lending practices, as “recipes and suggestions on how to live better.” The act of being frugal is not one of stinginess focused on the less, but on putting what you have to further service. It is, if you will forgive me, one aimed at maximizing joy by minimizing use. So if you’ve ever taken delight in turning leftover roast chicken into enchiladas, and even more delight in turning the leftover bones into lemon ginger chicken soup, you’ve got a taste of economics. You know first-hand that it is less a dismal science, and more a key ingredient in The Joy of Cooking.