Want to change the world? Cultivate friendships; use your imagination.
by Michael Metzger 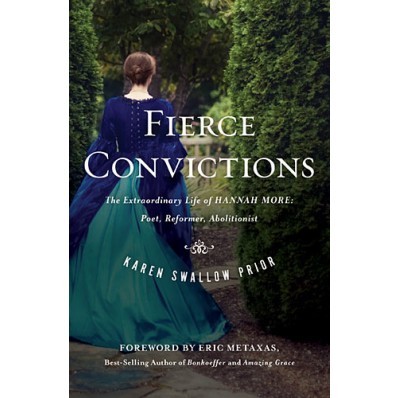 
Your phone is only as good as the network to which it’s connected. World-changing movements work the same way: they require high-performing networks. In fact, the sociologist Randall Collins says high-performing networks are the key factor in changing the world. The Clapham Sect is Exhibit A. Over the course of forty years, they abolished the English slave trade. Karen Swallow Prior’s biography Fierce Convictions shows us the networks of the Clapham Sect through the lens of poet, reformer, and Clapham colleague Hannah More.

Her story starts in a middle-class family that valued education. More’s father was a schoolmaster, and Hannah and her sisters would found a network of schools for young ladies. She also wrote poetry and plays. Two broken engagements to a man of means gave her a lifetime annuity and a measure of financial freedom to pursue writing.

More’s immense talents soon had her hobnobbing with London’s rich and famous. Theatrical and intellectual circles adored her, and the glitter of elite society supplanted More’s Anglican upbringing. The thrill, however, was short-lived, and More became disillusioned with the shallowness of life among London’s elites.

About this time, More read Cardiphonia, an influential book by John Newton, the converted slave trader. Newton described a “vital, experimental religion,” More wrote. She began returning to her Anglican religious upbringing, and it wasn’t long before she was introduced to William Wilberforce and the Clapham reformers.

The Claphamites’ story dates from the late 1700s. England was spiritually decadent. Clergy were regularly drunk. Many had lovers. The country was lacking in civility. England’s elites ridiculed the Christian faith.

Things began to change in the summer of 1786, while William Wilberforce was touring Europe with his friend the Reverend Isaac Milner. To while away the tedium, they read Philip Doddridge’s Rise and Progress of Religion in the Soul. Over time, Wilberforce realized he was not a follower of Christ, and he embraced evangelical Anglicanism.

That same year, Thomas Clarkson won a Cambridge University essay competition titled “Is it lawful to make slaves of others against their will?” (a subject he later admitted knowing nothing about). Clarkson collected his prize and set off for London. Resting at a creek, he had a spiritual experience—“a direct revelation from God ordering me to devote my life to abolishing the trade. It was time that some person should see these calamities to their end.”

The next year, on May 22, 1787, twelve men met in a printing shop on 2 George Yard in London and began to organize a movement to abolish the slave trade. This group would grow to become the Clapham Sect, and Hannah More would become part of that network. But what characterized the Clapham networks?

Being a writer and poet, More understood how imagination arranges information into preexisting cognitive frames. Take slavery. Most of England’s population in the 1700s imagined the slave trade as a good thing. Slaves were being civilized while England operated a prosperous triangle—cheap labor (African slaves), sought-after commodity (Caribbean sugar), and a voracious market (England). Abolishing the trade required reframing the imagination.

Early in her life, More noted Percy Bysshe Shelley’s observation: “The great instrument of moral good is the imagination.” Joining the Clapham network, “More and others felt that imaginative literature would reach into the hearts of readers where rational argument failed,” writes Prior. The arts thus “made a significant impact during the first years of the fight against the trade, particularly between 1787 and 1792.”

In 1788, William Cowper wrote his poem “The Negro’s Complaint,” and Josiah Wedgwood manufactured the famous jasper medallion topped with a relief of a kneeling slave in chains and emblazoned above him the question: “AM I NOT A MAN AND A BROTHER?” The Clapham activists had this question emblazoned on all sorts of items, including buttons and plates for high-society dinners. These medallions and plates served as “conversation starters,” reframing how leaders imagined the slave trade. That same year, More produced the poem “Slavery.” It was timed to appear just before Wilberforce was to present a resolution in Parliament to consider limits on the number of slaves that could be put on a ship. These works were part of an all-out arts abolitionist campaign, including John Newton’s forceful pamphlet Thoughts Upon the African Slave Trade, also published in 1788, where he begins with a “confession, which . . . comes too late . . . that I was once an active instrument in a business at which my heart now shudders.”

More hoped that “the poets and painters will at last bring the Bible into fashion, and that people will get to like it from taste, though they are insensible to its spirit, and afraid of its doctrines.” This is why she kept a copy of the famous drawing of the slave ship Brookes, which, Prior notes, “had resulted from long, painstaking research by Clarkson, and [More] was in the habit of showing the drawing to guests at social gatherings.” The Clapham network viewed the visual arts as stirring the “social conscience” that “had drawn a veil over the horrific business of trade in human flesh. The veil had to be lifted.”

A tribute greets the visitor to the room where William Wilberforce was born on August 24, 1759: “No Englishman has ever done more to evoke the conscience of the British people and to elevate and ennoble British life.” In appealing to conscience, the Clapham network reflects a central tenet of historic Christianity. In seeking to change the world, the apostle Paul targeted the individual human conscience. We “commend ourselves to every man’s conscience in the sight of God” (2 Cor. 4:2).

Since every individual is made in the image of God, everybody has a conscience. The Clapham Sect stirred the conscience of the prime minister William Pitt, even though he apparently never came to faith. But he did become involved. If you want to change the world, you have to stir social conscience at the national level.

Targeting the Up-and-In While Helping the Down-and-Out

The Clapham Sect targeted the up-and-in while helping the down-and-out. Hannah More, for example, did much good for the down-and-out but recognized “the greatest need for change was among the ‘fashionable.’” This is why the Clapham network founded the journal Christian Observer in 1802, edited by Clapham member Zachary Macaulay. This periodical targeted the “more cultured,” so that the movement’s ideas might be read and respected by the members of the social elite.

This was the early church’s strategy as well. In The Rise of Christianity, Rodney Stark writes that the church influenced the up-and-in more than the down-and-out, being “dominated by a socially pretentious section of the population of big cities.” In The Rise of Western Christendom, Peter Brown makes the same point. “There is no room for the later romantic myth of Christians as a perpetually hounded minority.”

In To Change the World, James Davison Hunter writes that Wilberforce and the Clapham circle tell “the story of overlapping elites and institutions.” Their network targeted the up-and-in because they wanted to change institutions. Thinking institutionally is not the strong suit of evangelicals. But it was for More and Wilberforce. As Hunter notes, Wilberforce provided moral charisma and political capital while Hannah More (well known in literary circles) spent her cultural capital to influence London’s elites while also starting a series of schools for the poor.

If you add up the Clapham characteristics—imagination, conscience, and elites such as William Cowper and William Pitt—you end up with a culture of collaboration. Broad problems require big solutions, and big solutions demand collaboration. People who collaborate build networks. The Clapham Sect collaborated with broader networks because the problems they sought to solve required it. We see this in William Wilberforce’s writings. “I was no party man—measures, not men, were the object of my concern.” He later wrote his son Samuel, “A principle on which I have acted for many years, and which I recommend to you early in life, is that of bringing together all men who are like-minded, and may one day combine and concert for the public good. Never omit any opportunity, my dear Samuel, of getting acquainted with any good or useful man.”

I close with collaboration because, as I mentioned, this is not our strong suit as evangelicals today. A November 2014 McKinsey report describes the nonprofit sector more generally as “deficient” when it comes to capacity building, cash, and collaboration. Too many ministries are fearful of exposing their donor base to other ministries, which makes collaboration highly unlikely. Fierce Convictions will remind readers that solving any cultural problem requires collaboration.

Like your phone, the Clapham Sect was only as good as the networks to which it was connected. Fierce Convictions reminds us that world-changing faiths require high-performing networks. Prior’s retelling of the Clapham story through the extraordinary life of Hannah More invites us to imagine how we might carry on their legacy.

Students and professors must play a key role in the fight against modern slavery.