McDonald's is emblematic of libraries-turned-media-centres, and hospitals-turned-medical-centres: the human has become inhuman. And yet, like so many things in modern life, the fault, dear Brutus, lies not in McDonald's, but in ourselves.

Among the many victims of modern ideology, the social act of eating is perhaps one of the most badly wounded. Recent surveys show that only one in three families eat meals together on a regular basis. (Taking into account that the idea of family itself is, in some circles, considered quaint, the fraction of people eating alone must be even higher than these survey results suggest.)

Restaurants, or what used to be known as restaurants, are the focus of our present enquiry. McDonald's, the worldwide chain of quick-service (as they like to call it) restaurants, not only symbolizes but embodies what is wrong with modern food culture. I'm not speaking here of the high-fat, high salt menu, from which, after all, no one is forced to choose. As McDonald's would hasten to point out, they sell what sells. Rather, I'd like to focus on the restaurants themselves, or what might better be called the food delivery system.

Modernism's reliance on science at the expense of nearly everything else gave us, at the dawn of the twentieth century, the "scientific management" system of Frederick Winslow Taylor. Taylor was most famous, or infamous, for his time-and-motion studies which reduced any and every manufacturing job to a series of repetitive, efficient movements where inefficiency and waste were ruthlessly eliminated. Along with—one hastens to add—humanity and the enjoyment of one's work.

The McDonald's restaurant is a nearly-perfect rendition of a Taylorian time-and-motion study project. Every detail of their food delivery system has been scientifically engineered to consume the absolute minimum of time and resources. The result is that you can get a healthful meal (in that the food is delivered at safe temperatures, dietary questions aside), relatively inexpensively, served very quickly, with a reasonable expectation that your Quarter PounderÂ® will taste nearly exactly the same as the last one you had. That's the upside.

The downside is that you are not dining; you are refueling. Regardless of whether you patronize McDonald's as a dine-in, carry-out or drive-through customer, you are not expected to enjoy a meal with friends or loved ones. You are expected to acquire a certain quantity of fuel for your body, to be consumed on premises or off, as quickly as possible, so that you can get on with the important activities of your life—perhaps going to the gym or dropping a child off at soccer practice.

The most significant casualty of McDonald's scientific approach to fuel delivery is not nutrition—although a case against the nutritional value of its meals might be made by others—but the human experience of eating together. Gathering around a table to celebrate and enjoy God's wonderful gifts of food, family and friends is a ritual as old as human society. Now, thanks to our time-poor, car-centered modern Western culture, that ritual has been reduced to an act of in-flight refueling. And McDonald's has successfully captured the essence of this refueling function in their Taylorian approach to nutriment delivery.

McDonald's is emblematic of what is wrong with the modern programme. In its zeal to rationalize, universalize, abstract and conceptualize, the very human function of dining morphs into the very inhuman activity of refueling. The same modern impulse that created McDonald's is what turned the school library into the "media center" and the local hospital into the "medical center," where patients receive treatment instead of hospitality. In McDonald's and other fast-food chains, the sacred space around the family (or residence hall) table has been fragmented to an array of immovable objects, mostly two-tops that function as one-tops, reducing eating to a solitary act where the only enjoyment besides the food is reading the marketing messages printed on the tray liner. And that's the "dining room" experience. The drive-through experience is even worse.

In-flight refueling reaches its apotheosis at the drive through. Although a family may offer a quick thank-you prayer while driving away from McDonald's with a sack of microwaved hamburgers (and mine has), the clear meaning of the drive-through dining experience is not dining at all, but refueling. The face-to-face interaction, laughter, and love that ought to characterize the common meal is all but absent. In its place is the rapid consumption of the contents of a paper sack with emphasis on not spilling the soft drinks. Fellowship is confined to bits of conversation like "Who took my fries?"

This is not all McDonald's fault. Although they have followed the Frederick Taylor approach to food service (another horrid modern term) about as far as they legally could, McDonald's would have no business if adults were not willing to dine—if you can call it that—in this manner. Like so many things in modern life, the fault, dear Brutus, lies not in McDonald's, but in ourselves.

It is not my intention to impose pangs of guilt on everyone who ever bought a meal at a drive-through window. Sometimes necessity dictates that in-flight refueling is the solution to a scarcity of money, or time, or both. Rather, I want to encourage mindfulness of the social function of eating together as both a necessary and delightful part of our life together in this world. Gifts of food are meant to be shared, whether around a table or a campfire, and it is in sharing that we receive the greatest benefit from our meals. We are truly nourished in every sense of the word.

Some might argue that this picture of the communal table is unrealistic: that family (or fraternity) strife renders many meals awkward, tense and over as soon as the last forkful is ingested. While it is obviously true that not all family or fraternal relations are happy, I contend that it is at the common table that relationships can be mended, order restored, and grace extended to people at odds with one another. Certainly to avoid the table in order to avoid tense encounters is no solution—it is merely finding other ways to refuel without confronting the invigorating friction of life together.

Like many things in our lives (big-box stores come to mind), McDonald's is more a symptom than a cause of community disintegration. It is the symbol of the dead end of runaway modernism, of the belief (and it is a belief, even if it professes to believe nothing) that all human activity can be rationalized, compartmentalized, and "improved" by careful analysis and empirical research. These analytical tools can get you McDonald's, but they cannot get you the joy of sharing a meal with family or friends. 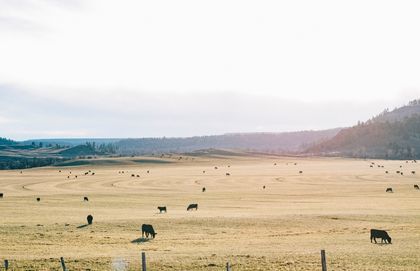 How working with, rather than against, nature can help feed nine billion people.