So what's wrong with pragmatism in architecture? Plenty, as it turns out.

An old industrial building on Chicago's Near South Side haunts me by its excellence.

The Lakeside Press Building, a massive cube some eight floors in height, is marked by huge soaring brick columns that are (uncharacteristically for its time) knit together by steel spandrels, giving the building an unmistakable vertical thrust not unlike Louis Sullivan's famous Wainwright Building in St. Louis. But in this case, steel spandrels make the columns—which are in fact quite massive—appear slender and graceful as they reach for flattened arches six floors up. Except for the detailing, the effect is Gothic, like those remarkable European cathedrals where the heavy stone columns become impossibly thin as they race to vault across the nave. The building is decorated with cut stonework and insignia that would not be out of place on an Ivy League campus.

The Lakeside Press Building was built in the early twentieth century by Thomas E. Donnelley, president of the R.R. Donnelley and Sons printing company. It originally housed a variety of printing and binding equipment, and now serves, interestingly, as a high-tech data center. It was designed by noted architect Howard Van Doren Shaw.

Why does this building, so graceful despite its bulk, haunt me? Because it is nearly a hundred years old, and in that time, the architecture of industry has devolved from achingly beautiful buildings like this one to the quilt of one-story metal sheds one sees on approach to either of Chicago's two major airports. These buildings—one searches in vain for a more appropriate name for them—are little more than corrugated metal covers protecting a two-dimensional process diagram from rain and snow. As architecture they are ciphers—works of little cost and less effort that escape the notice of designers because they are so obviously not designed. By at least some definitions, they are not even architecture.

Yet people go to work in them, as evidenced by the rows of cars parked out front. What haunts me, as an architect, is this question: Why, a hundred years ago, was it worthwhile to construct a magnificent eight story industrial Gothic factory whose grace and dignity still inspires a century later, while today it is not only acceptable but commonplace to send industrial workers to labour in tinfoil huts better suited to the sheltering of aircraft than human beings? What happened?

I am inclined to blame another Chicagoan, John Dewey. Dewey, philosopher and education theorist, was a leading cheerleader for a philosophy known as pragmatism. Pragmatism, a notion that most North Americans enthusiastically (and thoughtlessly) embrace, says that truth is not an absolute, but a label for successful adaptive strategies; in other words, what works is what's right. And metal sheds do keep the rain and snow off of Chicago's twenty-first century industrial workers, no less than the Lakeside Press building kept its early twentieth century workers warm and dry.

So what's wrong with what works? Plenty, as it turns out. Pragmatism as a philosophy, carried into the realm of architecture, has given us some of the dullest, most uninspired, dispiriting and soul-crushing buildings of the last century, including some truly awful schools, churches and office buildings, in addition to the industrial sheds in view just now. Because it elevates function over form (indeed, over all else), pragmatism makes the cheapest, meanest, most niggardly accommodation for human shelter unassailable because, well, it works. Questions of design, beauty and dignity—questions that obviously concerned the builder of the Lakeside Press Building—are dismissed out of hand as "unnecessary frills." Pragmatism is the argument for eliminating art and music from school curricula because such things are not "central to the function of education," which, presumably, is preparing the next generation of office drones.

Did John Dewey design or commission the circuit board of industrial buildings that consume much of western Chicago? No. But he helped to create a world where such chilling mediocrity was permissible, acceptable, even expected. Because after all, why would anyone spend a dollar more on a factory than is absolutely necessary, especially for frills like decorated spandrels and arched windows?

Are there any latter-day Lakeside Press buildings out there? Yes, but they are as rare as they are remarkable. The Herman Miller company has hired notable architects for many of its industrial buildings in the Zeeland, Michigan area. British architects Richard Rogers and Norman Foster have designed some impressive high-tech manufacturing plants in Great Britain. So it is possible for manufacturers to invest thought, care, design and even a few extra dollars in making dignified spaces for manufacturing. But sadly, the examples above are the exceptions that prove the rule. Most buildings in North America that involve the manufacture, assembly or shipping of goods are the architectural equivalent of a cardboard box.

And of course the great industrial buildings of the late nineteenth and early twentieth centuries, because they are so solid, so elegant, so well-crafted, are seeing new life as loft apartments, or as offices for technology companies (and architects). Rarely are they retrofitted for use as factories, however, as modern industrial designers seem incapable of planning any process in three dimensions.

Happily, though R.R. Donnelley and Sons no longer occupies the Lakeside Press, they continue to employ serious architects to design their printing plants, including a remarkable (for its time) facility in Roanoke, Virginia.

Factory workers are human, and no less deserving of dignified workplaces than insurance adjusters or college professors. That doesn't mean that factories should look like college buildings. The Lakeside Press still looks like a factory: a beautiful, soaring, inspiring, soul-stirring Gothic factory. 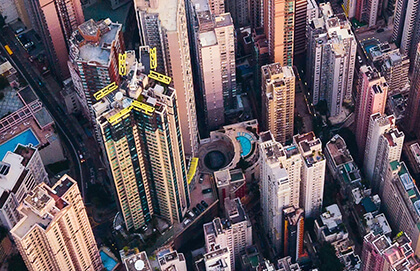 Like it or not, skyscrapers are here to stay.

I fear that my profession is much more in thrall to fashion than to common sense.