Is it a map or a compass?

No matter what your job title, there are certain key landmarks for all who aspire to Christian leadership. But it's up to the individual to draw a personal map.

by Janis Balda and Wesley Balda 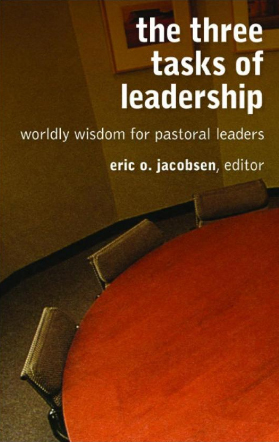 
We came across some challenging ideas from The Three Tasks of Leadership: Worldly Wisdom for Pastoral Leaders, edited by Eric Jacobsen. The book is built around one of Max De Pree's well-known statements:

The first responsibility of a leader is to define reality. The last is to say thank you. In between, the leader is a servant and a debtor.

As the highly successful CEO of the Herman Miller Company, author of excellent leadership books, and longtime board chair at Fuller Seminary, his legacy is firmly fixed. His life and work have touched many, and his results have been lasting—perhaps because he has had a core purpose, a sense of direction for his life journey. Jacobsen has gathered an intriguing cross-section of authors, primarily from Fuller Seminary, and asked them to consider the quote above as a tribute to De Pree's influence, character and legacy. (Full disclosure: many of the authors in the book are longtime friends and colleagues and we serve as principals at the Max De Pree Center for Leadership in Pasadena, California (publishing partner of Comment). Nonetheless, we commit to give you a "fair and balanced" review.)

Janis posed an interesting question as we worked through the book together: "Is it a map or a compass?" A compass greatly improves the safety and efficiency of travel as it is used to calculate a heading—a direction. It improves our navigational capability. We concluded that Max De Pree himself originally provided the compass in his books, stemming as they do from his own moral center, and the writers of The Three Tasks sketch out a set of distinctive landmarks for a particular traveler—the pastor—on the journey. In navigating life, whether one has a title of pastor, businessperson, educator, student, volunteer or something else, there are certain key landmarks in this book for all of those who aspire to leadership and call themselves followers of Christ. But it is left up to the individual to draw a personal map.

One landmark is the relatively new focus in leadership studies on followership. In light of the fact that probably the only definition of a leader that everyone agrees on is that leaders must have followers, this focus seems particularly useful. De Pree reminds us in Leadership Is an Art (Dell, 1990):

The measure of leadership is not the quality of the head, but the tone of the body. The signs of outstanding leadership appear primarily among the followers. Are the followers reaching their potential? Are they learning? Serving? Do they achieve the required results? Do they change with grace? Manage conflict?

In The three tasks we discover several additions to what it means to be a follower. Dennis Voskuil reminds us that being grateful reflects a state of being dependent on God's grace and refers to the "mystery" reflected in Henri Nouwen's quote—"that leadership, for a large part, means to be led." We cannot isolate leadership from followership. Rich Mouw, Fuller's president, reflects on the effects of this type of leadership—transformational leadership—linking it to our changed nature through the work of Jesus Christ. Nancy Ortberg describes how De Pree's invitation to lead is a "dance" between the hard tasks of leadership and the "kindness" of leadership.

The introduction by Walt Wright, former president of Regent College and now Executive Director of the Max De Pree Center, brings to the forefront another landmark—the nature of the leader's responsibilities. Despite the title and its focus on "tasks," the tone for responsibility is set in Wright's comment: "Leadership is responsible [italics added] to articulate the mission, reinforce the culture, empower the people, and say thank you."

As in most leadership literature, we find that the essays draw on many different understandings or definitions of commonly used terms, such as leaders, followers and servant leadership. The latter term is used frequently in the book, though Siang-Yang Tan uses servanthood, as the foundational calling of God for all Christians. He emphasizes the role that De Pree gives to moral purpose—another landmark—which embodies authenticity, inclusiveness, truth, vulnerability, access and personal restraint. Linda Wagener's focus on the importance of an integrated personal identity brings out the particular significance of authenticity. She responds to De Pree's concern for the commonly experienced discontinuity between how we see ourselves as persons, and how we see ourselves as workers.

The book includes practical advice to pastoral leaders: on functioning as a leader within different structural forms by being Christ-centered (Sherwood Lingenfelter); on how wise and seasoned pastors can care for those starting out, and on reintroducing an apprenticeship model for developing leadership (Jim Bradley); on spiritual formation (Richard Peace); on measuring service motivation (David Augsberger); on building gratitude into an organization's ethos (Howard Wilson); and on using appreciative enquiry as a means for leaders not only to express gratitude, but to participate with others in creating meaning as a learning community (Mark Lau Branson).

Robert Banks concludes with a specific connection to the world outside of the church in exploring how forming future leading servants can take place. He advises that we shortchange ourselves and future leaders when we narrow in on a single field, whether it be leadership studies or theology, and fail to take into account the full range of disciplines, acknowledge the important role and scope of creativity, and use life in all of its fullness as the classroom for learning.

So, we map-makers wonder: would it have helped to cross more cultural bridges? Or generational boundaries? Would our boomer map look different from your millennial map? Do "tasks" create different signposts than "responsibilities"? If we are to be "debtors," then what have we "borrowed" that we now owe back? How do we "define reality" for another? Perhaps a set of stories paralleling the wisdom would make the landmarks more visible?

One belief, a fundamental truth, verbalized by De Pree frequently—that we are all made in the image of God—creates a new map for how we treat those we work with, whether in the church, in business, or in education. "For a Christian leader, if everybody with whom she works is made in God's image, that carries tremendous implications." As De Pree frames it, "I believe leadership has a future, but it will not be easy nor is it guaranteed. As a society, we need to care more about faithfulness than success. We need to celebrate the potential of communities more than individual accomplishment." So from belief in our uniqueness comes not only an ethic of individual care but also a practice of people-centered systems and corporate integrity—just one example of how a compass and some significant landmarks can help a leader prepare a better map.

Dr. Janis Bragan Balda is Professor of Management at the Centre for Advancing International Management (AIM Centre) at St. George's University, where she also directs the specialty management degree program initiatives. Dr. Balda established the Peter F. Drucker Society of the Caribbean at SGU and leads research efforts in total health management in collaboration with the Windward Islands Research and Education Foundation [WINDREF].

Dr. Wesley Balda is Executive Director of the Centre for Advancing International Management [AIM Centre] and Professor of Management at St. George's University. Previously, he was the founding Dean at the George Fox University School of Management, where he developed their executive and professional MBA tracks, and created the first doctorate in management in the Northwest US. Prior to joining George Fox University, Dr. Balda served as the Director and Chair of the Executive Management and Ph.D. programs at Claremont Graduate University's Peter F. Drucker Graduate School of Management in California. In addition to leadership positions, Dr. Balda has taught at the Drucker School, Claremont School of Theology, Azusa Pacific University, and Hope International University; he also served as Director of Student Services at Claremont School of Theology, MBA director and chair of the business program at Hope International University, and Director of Institutional Research at Fuller Theological Seminary.

Beyond signs of hope: prolepsis and planting sequoias

Inside the Second Black Box