A good friend of mine once said that artists are all just making speedboats. Artists, he was trying to say, aren't always examining the existential questions of life. Often, we're just producers of useless objects for the rich.

I never had a penny to my name, so I changed my name.
—caption printed on Richard Prince's painting, I Changed My Name

A good friend of mine once said that artists are all just making speedboats. Artists, he was trying to say, aren't always examining the existential questions of life. Often, we're just producers of useless objects for the rich. Richard Prince both epitomizes and critiques this idea, as could be seen in his retrospective, Spiritual America, that showed at the Guggenheim until earlier this week.

Richard Prince is an artist who has made his considerable reputation in the contemporary art world since 1977 by appropriating and re-contextualizing popular American imagery. Through the years, Prince has carried out his conceptual interests in three distinct mediums: photography, sculpture, and painting—excelling at each.

He was first recognized for his photographs of advertising imagery. His pictures of ads kicked off the Guggenheim show. They are poignant in their appropriation of fashion and cigarette advertising, and they question the notion of authorship while exemplifying the American ethos.

At the same time, these photographs leave me wanting something they cannot give: the aesthetic payoff of the object (image). They are, after all, reproductions of reproductions. Prince has literally re-photographed advertising images (for jewelry, cigarettes, clothing, and others) and displayed the photographs as his own. His photos expose the grain of the original printing process and distress the image from its original flawless context, changing the aesthetic into one of coarse duplication. Of the Guggenheim pieces, only some of the Marlboro series seem to hold up on their own, against the grain.

Of course, unlike the ads themselves, they're conceptual pieces, and they're not supposed to be perfect. They come close to achieving a sort of balance between their conceptual strength and their inherent beauty.

The second, sculptural body of Prince's work is also conceptual, while much more visually dynamic. From the full chassis of a muscle car mounted into a block in the lobby of the museum to car hood paintings, Prince further fetishizes already-fetishized objects, American muscle cars. The sculptures have an immediate, strong presence and exude a modernist confidence in their simplicity. They reflect American hubris and industry, with all the failings that come with an over-weight, consumer-driven, car culture.

Prince's paintings occupied the largest amount of space in the exhibition. They are generally large (8'x10'/2.4m X 2.5 m, or larger) and monochromatic, with a single joke stencilled, sometimes accompanied by a New Yorker-style cartoon, in the center of the space. The often racist, off-color and tacky jokes continue Prince's conceptual jab at what America is about—big, loud, tacky, and inappropriate. From our foreign policy (racist jokes?) to our media (sex jokes?), his criticism makes us laugh awkwardly, in embarrassment. We know America has its good side, but Prince shows it is often not the side with which we lead. Prince's exhibit is called Spiritual America, and, in a way, it's fitting. It's easy to see Americans' true spirituality as bad jokes and muscle cars. What we represent to the world is advertising, consumerism, and shallow relationships. My wife and I recently met a man from Belgium who said Americans have a reputation for being open to talking to everyone but never having a real relationship with anyone. We said that he was probably right, and promptly left.

On the other hand, Prince's implication that there isn't anything deeper or true in the spiritual lives of Americans is unfair. There have been some tremendously encouraging signs that American Christianity is trying to move beyond superficial and humanitarian efforts to fight AIDS, to feed the poor, and to care for our environment—springing up all over the U.S. The spirituality that I know and grew up with isn't about celebrity or distraction. It's about communities in relationship, lifting each other up and meeting one another's needs.

Maybe the resolution to these disparate reactions is to let Richard Prince be right: The concept of a "Spiritual America" is a joke. Perhaps we have created a shallow, consumerist, rampantly destructive culture that's self-righteous, to boot. But our challenge is to turn the joke into a lyric of hope or a song of redemption. The sooner we acknowledge the reality, the sooner we can work against it or correct it. In the end, I think Prince gives us a hard lesson that's easy to swallow but difficult for us—individually and nationally—to digest. 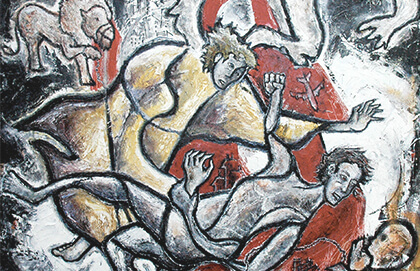 An Unceasing Revelation of Divine Light