Journalists are no more (and, admittedly, no less) than citizens who have taken it upon themselves to pass information on to their fellow citizens—and therefore obliged to respect the common good, the common order, and, above all, the common law.

For North Americans used to the stereotype of the selfless, crusading reporter, the terms journalism and war crimes verge on the oxymoronic. Yet the construct and the contradiction could both implode this September if the International Court of Justice finds a Kenyan broadcaster must stand trial for inciting genocide.

As reported recently on The Atlantic's website, radio journalist Joshua arap Sang is accused of using his program What the Nation Is Saying to fuel interethnic rioting following the Kenyan presidential election.

About 1,200 people died in the rioting, and Sang has been identified as a suspect for urging the rioters to target women who "played for the wrong team"—that is, supported a candidate who did not belong to their ethnic group.

Sang steadfastly maintains he did nothing of the sort. He argues that as a professional journalist, and especially as a Christian, he would never do such a thing. Some familiar with the allegations agree the evidence against him is speculative at best.

Intriguingly, however, Sang is quoted in the article as protesting that just by taking preliminary legal steps against him, the International Criminal Court is threatening journalistic freedom. Reporter Robbie Cory-Boulet quotes him as saying, "If they take me to The Hague and I know I was doing my job professionally, then what are they telling journalists?"

Embedded in that quote is the attitude that fuels the great myth of modern journalism: that somehow privileged access to a newspaper's pages or a broadcaster's airwaves, or even an Internet site's traffic confers an automatic get-out-of-jail-free card when it comes to accepted standards of human conduct.

Freedom of expression, as defined by "professional" journalists, is reflexively held up as a good that is immutably exculpatory, regardless of whether what is expressed is good or evil.

Obviously, few journalists venture as far into the mire of evil as to be accused of crimes against humanity. As the article points out, if Sang is committed to trial for "journalistic war crimes," he will join a rarefied rogues gallery that includes the Nazi publisher Julius Streicher and the Rwandan radio broadcasters who whipped up that country's frenzied massacres.

Still, we have lived through 40 years of a notion of journalism that is menacing in its own right, precisely because it seeks to elevate reporters, editors, publishers, broadcasters, and so on into media aristocrats who—oxymoronically—alone can be truly trusted to define and defend democracy.

If our institutions wallow in ignominy, if we endure a corrosive lack of trust at all levels of society, it is in part (heavy emphasis on the "in part" part) because we have lived out three generations of journalists espousing the democratic virtue of free expression while indulging themselves in a form of droit de seigneur, and damn the consequences.

As Canada's Supreme Court put it bluntly in a decision last year, it is essential to disabuse journalists (in whatever medium they operate) of the idea that they are anything but citizens who just happen to have access to instruments that allow them louder than normal voices.

In a case involving a National Post reporter's claim to have legal immunity from identifying an unidentified source, the Court said this:

The protection attaching to freedom of expression is not limited to the "traditional media", but is enjoyed by "everyone" (in the words of s. 2(b) of the Charter) who chooses to exercise his or her freedom of expression on matters of public interest whether by blogging, tweeting, standing on a street corner and shouting the "news" at passing pedestrians or publishing in a national newspaper.

To throw a constitutional immunity around the interactions of such a heterogeneous and ill-defined group of writers and speakers and whichever "sources" they deem worthy of a promise of confidentiality and on whatever terms they may choose to offer it (or, as here, choose to amend it with the benefit of hindsight) would blow a giant hole in law enforcement and other constitutionally recognized values such as privacy.

The compelling part of that citation is not the raising of bloggers and tweeters to the coveted status of "real journalists." It is, rather, the sobering return of print and electronic media mongers to their authentic place as "people who stand on the street corner and shout 'the news' at passing pedestrians."

The complexity of media infrastructure and the self-importance of media practitioners can mask, but does not annul, the reality that journalists are no more (and, admittedly, no less) than citizens who have taken it upon themselves to pass information on to their fellow citizens. As such, they are obliged, in all that they do, to respect the common good, the common order and, above all, the common law.

As the Supreme Court put it so well in its National Post decision:

It is well established that freedom of expression protects readers and listeners as well as writers and speakers. It is in the context of the public right to knowledge about matters of public interest that the legal position of the confidential source or whistleblower must be located. The public (also) has an interest in effective law enforcement.

Again, the case being decided by Canada's Supreme Court was clearly a world away from allegations of inciting genocide in Kenya. But war crimes are only an extreme and large-scale form of crime in general.

The genesis of all crime is the belief that the law applies to those morons over there, not to a superior and exempted human specimen like me. Journalists who transform freedom of expression into a lie to cover their tracks only add sin to the crime in question. 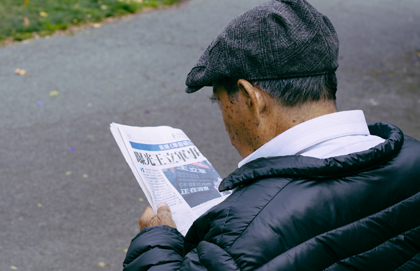 The Eternal Lens: The Press as a Humanizing Institution