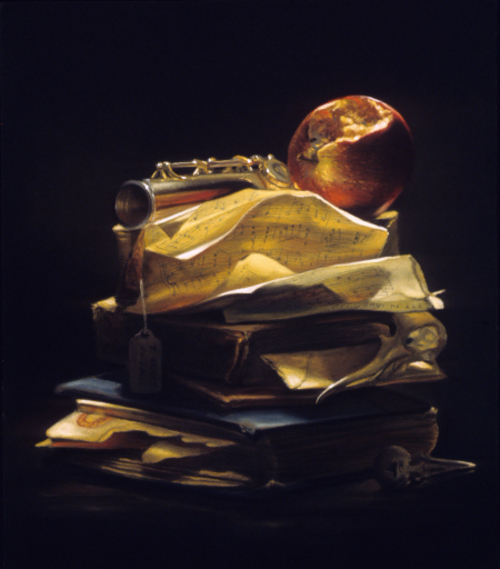 We know the story: how Eve and Adam and the serpent in the Garden of Eden tempting them to take and eat the forbidden fruit. Fruit traditionally symbolizes that which was forbidden and the transience of life. The bitten fruit rests on the edge of the book. This represents the forbidden fruit of knowledge hung on a tree by God. But knowledge brought exposure, not wisdom. Knowledge took a bite and with it exposure—nakedness—removal, guilt and pain. However close to the edge of the book, the fruit doesn't fall. It rests on the New Testament in which we read that Jesus, not a wily serpent said, "take and eat." And the next day Jesus himself hung from a tree, when the time was ripe, to repair the damage from the first "fall."

Referring to moral and spiritual blindness, the half hidden glasses watch, without eyes the passage of time. But they also see the price tag hanging off the edge of the pages. They see the price paid by the only One who could pay for the guilt and pain caused by Adam and Eve. The book (the Scriptures), the collected knowledge of past generations, suggest their proper place in the Christian life as the means to fight off the dark cloud of pagan temptations, as seen in the dark backdrop.

Out of the darkness of the picture plane a ray of light rests on the pages and the tip of a piece of bread below those pages. Here represents THE ONE in whom to hope, The WORD, the Bread of Life, that wherever we find ourselves torn between the pages of faithfulness and infidelity, God remains a faithful presence.

Everything has its testing point in the eye, an organ which eventually involves the whole personality and as much of the world as can be got into it. To see the world rightly, to learn to 'stare? at it, is difficult; sight is a moral sense.

As fallen human beings we are apt to see only what we want to see so we must have our eyes open if we are going to see 'what is' for what it is. Staring at reality with the eyes of my Christian faith in these times gives me the sharpest eyes for both the truth as well as the bizarre, the unreasonable and the unacceptable. Msgr. Romana Guardini, former professor of Philosophy of Religion and Christian Weltanschauung at the University of Munich, stated that "the roots of the eye are in the heart."

My aim as an artist is to use the 'eyes of my heart? to penetrate this concrete world in order to realize at its depths the ultimate reality; and to render the sublime—that aesthetic experience of being overwhelmed, filled with awe at something so majestic it evokes a sense of the One who created this astonishing universe. 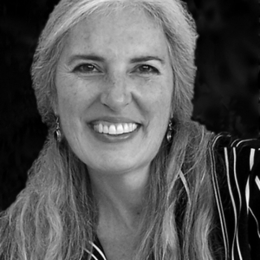 "Good, true and beautiful." Everyone knows, or is supposed to know what this means. But what if the label is just hollow at best, or misleading at worst? 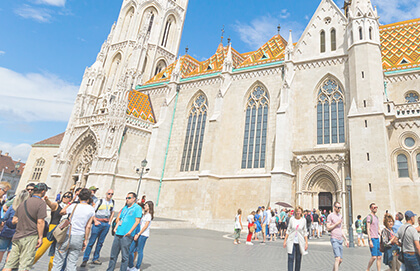 The Church and the Common Good

Can we equate the church's eternal mission with temporary politics?