Letter to a Young Writer

If the salt loses its saltiness, if you as a writer only scratch the surface of the world instead of digging deeply into life on this earth, your stories won't stay on the table but be thrown out into used book bins.

A few years ago, I sat in on a session with the judges of the inaugural International Booker Prize, a major literary award that takes into account an author's entire written output. Aside from the fact that Michael Ondaatje was sitting to my right, two things struck me in that auditorium, some salt and light in a bland and dimly lit room.

The first thing came from Colm Toibin, a well-known Irish writer, who was answering a question about the range of books the judges had encountered. He answered that on the one hand they had read a writer like Salman Rushdie, who seemed intent on stuffing as much of the world as possible into the pages of a novel like Midnight's Children, and on the other hand they had encountered a writer who set an entire novel in a single room with a single character, and though the setting was stark, the book evoked a rich psychological world. Both novels, Toibin said, mined a rich vein of human experience.

Mining that vein, I have thought, is how, as a writer, you bring salt to your reader. As I mulled over what Toibin said, I knew I wanted my own writing to delve deep enough to find those mineral deposits of truth and deliver those granules in stories that would be salt to my readers. This "mining" is an intense looking at the world in all its strangeness, tasting creation's succulence. But there is also bitterness. Our world's skin is cracked, lashed, and bleeding. Thankfully, salt is good for wounds as well as bland food.

My dad once cut his hand badly with a chainsaw and staggered up to our house, where my great aunt was canning peaches. She saw the wound, told my dad to look out the window, and poured raw salt on his gash, packing it in with her palm. My dad dropped to his knees with the shock of it. But the salt purified the wound and began healing torn tissue, fusing a scar that he points to now when he tells the story.

Some stories you may find yourself writing will shock you: tales about deep emotional gashes told in raw language. In such stories writing can feel claustrophobic: water rising around your neck, face gritted against granite. When you write, sunk deeply in such experiences, you may not be looking for mineral deposits of truth—you may just be gasping for a way out. But what you taste in that panicked rush—lips to rock—may surprise you with its startling savour: that moment in the story when you know you got it right, when your description of the world is true enough to taste.

The second thing that struck me in that auditorium came from South African writer Nadine Gordimer. Someone asked what one thing they were looking for in reading all these authors. "I don't want to sound too precious," Gordimer replied softly but firmly, "but I think we are all looking for illumination." But what does this look like?

Light, in a story, has to come from the world of the story. Fiction is not an aquarium you can shine a flashlight down into, some Energizer-powered moral. This is not illumination, any more than Christianese talk constitutes authentic dialogue. When Christ said, "I am the light of the world," he didn't say it from heaven. No: He said it with his feet caked in Palestinian clay. So the light we seek in stories is best found incarnated in a world made "real" because it is fully imagined.

Illumination in stories isn't found through otherworldly star-gazing, but through digging deeply into the world around us. In this we come back to the mining metaphor, but what we are digging for this time is more like Labradorite, a feldspar mineral that occurs in large crystal masses in which colours play in what is called labradorescence— the result of light refracting within the stone. As a writer, you can never shine light into a story—the result is hokey, contrived. If you want to convey your faith in stories, then wrestle with it like David Adams Richards does in his gut-wrenching novel Mercy Among the Children. Or take a cue from the writer of Genesis. Create a world, add intrigue—arranged marriages, belligerent uncles, deceitful brothers—and describe a journey. On this journey you will inevitably find yourself wrestling in the night with God. You will be marked (Marilynne Robinson tells us that all good stories wound) but you will also be named. This is God's covenant with you as a writer: that in wrestling with faith, illumination becomes language and the redemptive light in your writing will come from within your story, the labradorescence of authenticity.

Salt and light: this is what we look for in the world's great writers, even by secular standards. But if the salt loses its saltiness, if you as a writer only scratch the surface of the world instead of digging deeply into life on this earth, your stories won't stay on the table but be thrown out into used book bins. And if the light in your stories comes from pot-light morality shone down on your characters in cheap authorial judgements, rather than coming from within your characters' authentic struggles with faith, then the light is really darkness and your stories will be dull and boring.

However, if you can learn from great writers, even those not from your faith community, then you will know that the essence of good writing is digging deeply into the world. By doing this— grappling with faith in mud and darkness—you will find salt that will add savour and bring healing. And you will uncover the Labradorite stone that will truly illuminate your readers' lives. Seek these things, knowing that you will be wounded and blessed, and you will find them, and in this way bring something genuinely good into the world. 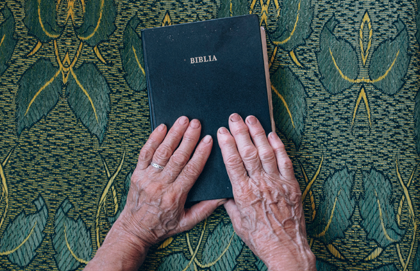 Biblical wisdom for the cultural apocalypse.