Nineteenth in an expert series on must-read books. 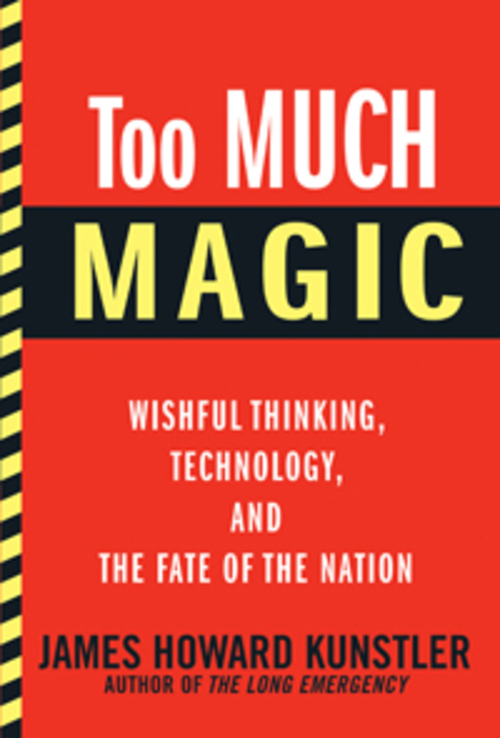 Too Much Magic: Wishful Thinking, Technology and the Fate of the Nation by James Howard Kunstler (Atlantic Monthly Press, 2012)

I like the word feisty. It suggests a fun argumentativeness, brashness, a bit of cleverness. If ever an author deserves this accolade, it is the caustic cheerleader for new urbanism, essayist, and novelist from upstate New York, James Howard Kunstler. His jabs at suburbia and the culture of happy motoring upon which it is (shabbily) constructed, seen wonderfully in The Geography of Nowhere: The Rise and Decline of America's Man-Made Landscapes and Home From Nowhere: Remaking Our Everyday World for the 21st Century are classics, and his opinionated study of some of the world's best and worst cities, The City in Mind, are informative and very entertaining.

This new title is a return to form after a necessarily dreary jeremiad about peak oil and climate change (The Long Emergency), in which Kunstler brings both his wit and multi-disciplinary knowledge to bear on his study of the organization and fate of our society in the decades to come.</>

To wit, he reminds us of the successes and failures of the new urbanist movement, those architects, city planners, town council folk, and urban designers creating walkable, sustainable, habitats with "mixed use" zoning, allowing humane and healthy neighbourhoods and towns to develop by honouring what we know is workable and good. He responds to critics firmly with incisive replies. For instance, new urbanists (because they rail against the sterility of modernist buildings and call for lighter touches, grace, decorations) have been dismissed for caring too much about style, as if decorations don't matter. Kunstler writes,

That one might want to decorate the elements of a building is also a well-understood human inclination. Often what appears to be decorations are practical devices: brackets to support spans, a cornice to direct water away from walls. (Buildings in the modernist mode and its offshoots are notorious for a basic failure to keep water out.) The decoration of buildings has been worked out in every culture in many styles over centuries. People like to use them because they are proven, understood, and pleasing. There are plenty of other ways to handle the ornamentation of buildings, and many of these were employed in the exuberant style wars of the nineteenth century, what Americans generally refer to when they use the term "Victorian."

Of course, if you are coming from a position that to ornament a building is forbidden which has been a fundamental rule of modernism dating back to the architect Adolf Loos's (1908), then naturally any mode of design other than modernist must be ruled out. But the style issue is a canard, flung out by those themselves hopelessly hung up on their own style. In fact, modernist interventions in American cities are the places in need of most repair and rehabilitation, especially now that we face circumstances such as the demise of mass motoring, which implies the obsolescence of a lot of infrastructure that was hooked up to freeways.

And so, as "our common car-dependent infrastructures" begin to fail, we must rethink the functions of everyday life and the sustainable ways of doing business, and figure out which cities might survive. (Some in the American southwest, for instance, like Las Vegas and Phoenix, are simply doomed for lack of viable water supplies; those around waterways, which will be used for transportation, will fare better.) Skyscrapers will not be able to be repaired, for want of supplies such as silicon gaskets; they will sit empty or collapse, as they have in Johannesburg. Suburbia and its culs-de-sac, strips of burger shacks, and now nearly empty big box stores, are in demise already; some of the poorly made vacated McMansions in Florida, he reports, are moulding from the inside out when air conditioning is turned off, surely a portent of things to come. In the "contraction" of society, brought on by the "long emergency" of running out of fossil fuels, we will have to return to some centuries-old wisdom about stewardship, scale, workable design, and authentic community.

Oh, but wait: what about those magic cities predicted in the early part of the 20th century? (He shows and evaluates an illustration from Popular Mechanics from 1925.) They are nearly laughable—if imaginatively bold—because they presume an unending source of energy. As do the many virtual models of the future. Internet shopping? Don't count on it when climate change and an unreliable supply of electricity returns us to the days of slow modems and DSL, at best. Commonplace air travel? Don't even think about it.

Worst of all—if only for its academic bravado and fascinating idols—is the contemporary work of the likes of Ray Kurzweil and his popular sci-fi vision of artificial intelligence, The Singularity Is Near. Kunstler isn't having any of it. Like an Old Testament prophet, he rails at the "techno narcissism" of that zeitgeist:

His credentials suggest that he is a person who must be taken seriously and is not somebody to be mocked, so I am serious and absolutely straightforward when I say that Ray Kurzweil's ideas represent the major leagues of techno grandiosity. They embody what is most purblind about our over-investments in complexity and the danger we are getting ourselves into as a result. He strikes me as the very soul of a mad scientist. The Singularity is Near is to extreme technophiles what Ayn Rand's Atlas Shrugged is to extreme libertarians. I hope though, that Kurzweil's book does not cause as much mischief in the world as Any Rand's book did.

Kunstler spends considerable time in one major chapter—some reviewers say it is the heart of the book—on Kurzweil's nanobots and metaphysical arguments about genetically modified artificial intelligence. It is spooky, fascinating stuff about eternal life and the meaning of the future of the cosmos. Brilliantly, Kunstler links Kurzweil's utopian vision of (algorithm-propelled hyper-intelligent) sensation to another futurist, the French philosopher Charles Fourier (1772-1832) who was particularly interested in architecture. Like Fourier, Kurzweil, says Kunstler, "is a product of a similar saeculum, an era that coincides with a certain generational mood, in this case a mood of spiritual seeking as represented in the upheavals of the 1960's." ("So was Ted Kaezynski," he wryly notes.) But some will want to skip over this crazy stuff and listen to his predictions about party politics and his take on the financial scene, "Going Broke the Hard Way."

And so it goes, this serious critique of bad ideas, bad practices, ideologies, and visions that are misguided or worse. Even though some chapters are particularly theoretical, as with his Geography of Nowhere and Home from Nowhere, he makes many very practical suggestions—clear-headed proposals—alongside his feisty outrage.

James Howard Kunstler frets over our shabby design life, the places we don't care for, and also the relationships that we fail to maintain. He's naming bad practices that are unsustainable because they are not true. As he puts it, we have been sold a "systematic misunderstanding of reality." That's enough to get any Comment reader's juices flowing, eager for feisty, if civil and civic-minded, ongoing conversation. Kunstler says he's a cheerful person, and we are glad. He does explore gloomy matters, but the book has enough colour and zest to make it something other than a doomsday lament. Indeed, as one review noted, it is "as brilliant as it is baleful."

Consequential Leadership: 15 Leaders Fighting for our Cities, Our Poor, Our Youth and Our Culture by Mac Pier (IVP Books, 2012)

Sometimes collections of essays seem a bit haphazard. Other times, happily, a book is edited well and pulled together with great care, and the material represents a common vision that invites us to deep consideration. Each chapter follows a pattern, but contains surprises, differences, joys. Such is the case with this book, commissioned for a large gathering co-sponsored by the New York City Leadership Center. The opening chapter has Pier sharing his own experiences in New York on 9/11, and explaining how he came to be at a prayer meeting for the city in the Empire State Building that morning—by way of John Stott and the Urbana Missionary conference, working on campus with InterVarsity Christian Fellowship, and learning from the likes of Ray Bakke about the strategic significance of the world's great urban centres. His desire to network leaders, honour mentors, and encourage the process of leadership development is legendary, and he does this work for the sake of advancing God's Kingdom, bringing degrees of health and well-being to our cities.

This book shares the stories of experienced leaders from many walks of life—CEOs, pastors, urban activists, scholars, directors of non-profits—who have made it their business to be entrepreneurs for the common good, who have offered their skills and lives for the cause of making a difference, each in various spheres of influence and around different issues. From pastor Tim Keller to pollster George Gallup, Girl Scout executive Frances Hesselbein to Philadelphia mayor Wilson Goode, campus worker Brenda Psalter McNeil to third-world leader Ajith Fernando, these life stories are more than very informative, telling about interesting, dramatic lives. They are inspiring—which is to say that we can learn from them. These are examples that motivate, giving us principles to imitate.

Each chapter has a one-word title, such as Sacrifice, Reconciliation, Team, or Festival. Glen Smith of Christian Directions, the subject of the chapter simply called Shalom, tells stories of Toronto, Montreal, and Haiti and then asks "What would shalom look like in your city?" and offers avenues to be explored. This is a useful book, insightful, by seasoned leaders and global visionaries. It will enlarge your heart, showing you how people really do make a difference, and help you, perhaps, clarify your own vision, and step up to be a more consequential leader yourself.

Twentieth in an expert series on must-read books.

A summer feast of books