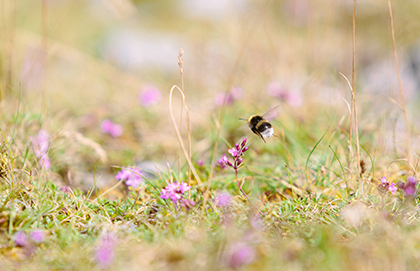 In a world that feels like it’s disintegrating, what does it mean to follow the One in whom all things hold together? 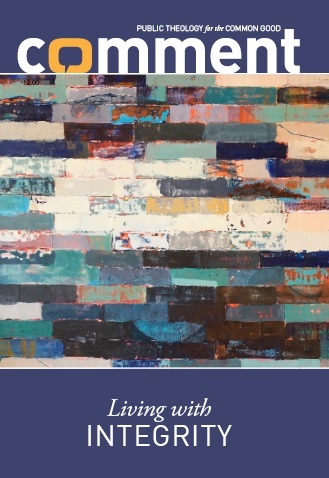 In his fascinating study of insect life on a French Farm, A Buzz in the Meadow, entomologist Dave Coulson discusses how certain species are threatened not because of failing populations, but because their habitats—the meadows, swamps, and woods necessary to rearing young, feeding, and mating—are disconnected. It is not that there aren’t enough, say, moss carder bees in any given place, but that the populations are cut off from one another. This marooning of populations doesn’t necessarily mean that the species will die, but it means that the bees will have further to fly to forage, to find new mates, and to new places to nest. Even if we conserve many of these so-called islands, the populations of bees and other insects cannot thrive unless there is a connection between the various habitats. Conservation—the safeguarding of habitats of endangered species—requires protection of a contiguous, coherent habitat in which to mix and thrive. Without it, the population becomes fragile and prone to collapse.

It’s not hard to imagine that today the same sort of conservation challenge applies to us. How can we protect coherence in a society that maroons different parts of us on disconnected islands?

How can we protect coherence in a society that maroons different parts of us on disconnected islands?

In many ways, of course, we are thriving. Our lives and our work might look okay in any given moment, but in the quiet of the night, or as we walk out the door in the morning, we sense, as Jonathan Chaplin notes in this issue, “a disturbingly elusive sense of dis-integration.” We feel it when we come home from work and ask ourselves the question: “What did I do today?” Or, when then child doing her homework asks: “What does my physics homework have to do with that beggar I saw on the street?” When the chemist asks: “Should I make this compound?” When we step out of the polling booth, we ask: “Is that it?” Or, as you say your prayers before heading to bed, you look back on your day, and count the ways in which your words, your deeds—your desires—are painfully subluxated from what you want to do. Why did I do that again?

Not all separation is bad, of course. The existence of a wide variety of social institutions each doing its work in its discrete space is an often unacknowledged good of modern society. And those who come from places where one institution infiltrates and dominates the others—China, for instance—the separation is like fresh air. If you’re used to the Communist Party’s tentacles grasping everything from the number of children you can bear, to your union representative, to the preachers in the church, the idea of independent social institutions is liberating.

Faithful Christians see the challenges associated with the absorption of one institution by another, what Reformed scholars call the “absolutization” of a given social sphere. But sometimes in our desire to avoid the pitfalls of one institution dominating the others—putting up fences between spheres—we forget the ways in which the various spheres of life are linked and rely on one another to thrive, what Reformed thinkers have called the “linking of social spheres.” Sometimes fences make good neighbours; but sometimes bridges need to be built.

We experience this fragmentation both personally and politically. The individual’s lack of a sense of cohesion has its mirror image in institutional isolation. Given that to live in a modern society is to live in a differentiated society, and given that Christian social thought has articulated the goodness of such differentiation, how can we live well when such differentiation becomes fragmentation, compartmentalization, dis-integrating us as a society but also personally or existentially? We typically understand integrity as living an authentic life—a life where one’s actions are consistent with one’s beliefs. But that is not enough. Indeed, understanding integrity in this purely individualist way leads to the social vision of coherence proffered by liberal individualism. It just happens that this vision ends up leaving the individual lost and disconnected from others, from meaning, and, as Patrick Deneen notes, from both the past and the future. The fractures appear permanent, maybe even eternal.

Benedict XVI writes that “as a spiritual being, the human creature is defined through interpersonal relations. The more authentically he or she lives these relations, the more his or her own personal identity matures. It is not by isolation that man establishes his worth, but by placing himself in relation with others and with God.” Indeed, in a nod to our need for integrity, Christian social teaching closely links goodness to wholeness. The common good, John Paul II notes in his encyclical Sollicitudo Rei Socialis, is equal to “the whole conditions of social life that allow groups, as well as the single members, to completely and quickly reach their own perfection.”

The idea of “completely and quickly reaching perfection” doesn’t feel plausible for many of us today. If our sense of disintegration feels elusive, the possibility of living a whole life seems even more so. It is our hope that this issue of Comment will draw your attention to the possibility that that alienation which gnaws at us might not be eternal; that, perhaps, he who “holds all things together” might have the last, and lasting word.

Why Eagleton Is Half-Right