Love will build this city

Caritas in Veritate and the call to culture making. Includes the 2009 joint statement "Doing the truth in love," presented by the Center for Public Justice, Cardus and the Kirby Laing Institute for Christian Ethics.
by Gideon Strauss 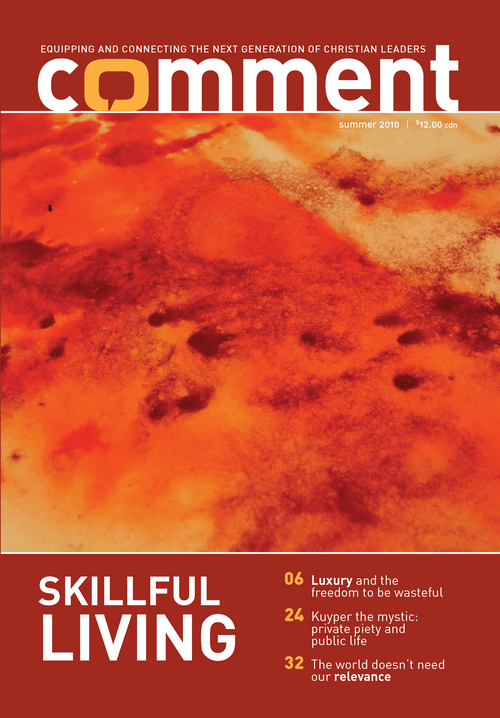 One of the most robust sustained Christian engagements with the modern age is the series of "social encyclicals" issued by the Roman Catholic popes. These encyclicals offer a thorough study of the challenges of social and economic development in the aftermath of the religious, social, and technological revolutions of the 18th century.

2009's Caritas in Veritate starts with a claim that—in our day—startles:

Charity in truth, to which Jesus Christ bore witness by his earthly life and especially by his death and resurrection, is the principal driving force behind the authentic development of every person and of all humanity.

This claim is in continuity with the central message of Populorum progressio, which Benedict summarizes as follows:

The truth of development consists in its completeness: if it does not involve the whole man and every man, it is not true development.

This completeness is discovered in Christ, who "in the very revelation of the Father and of his love fully reveals humanity to itself."

Benedict summarizes his claims and those of Paul VI succinctly and forcefully:

The Gospel is fundamental for development.

Benedict unfolds the implications of his initial claim slowly and carefully over the course of an introduction and six chapters.

In the Introduction, Benedict presents a sociology of love—charity—that serves as the infrastructure for the argument in the rest of the encyclical. Love and truth are inextricably intertwined. Human beings always, to some extent, yearn to love authentically and to know the truth, because this is our vocation from God. The origin, coherence, and purpose of everything are found in love: "Love is God's greatest gift to humanity, it is his promise and our hope." Because human beings are "the objects of God's love," we become "subjects of charity" who are called to make ourselves "instruments of grace" to bear God's love into the world and to "weave networks of charity."

Love, with justice, evokes in human hearts a desire for the common good. In Benedict's sociology of love, this desire causes us "on the one hand to be solicitous for, and on the other hand to avail [ourselves] of, that complex of institutions that give structure to the life of society, juridically, civilly, politically, and culturally, making it the polis, or 'city'."

The increasing interdependence of people around the world—"globalization"—offers a challenge to this desire, but a challenge that can only be understood against the background of God's history, which culminates in the fullest fulfillment of our desire for the common good in the eschatological city of God.

In the first chapter of Caritas, Benedict summarizes the message of Populorum progressio—as above, the Gospel is fundamental for development, but this includes two things: (1) "that the whole Church, in all her being and acting—when she proclaims, when she celebrates, when she performs works of charity—is engaged in promoting integral human development," and (2) "that authentic human development concerns the whole of the person in every single dimension." Because of these, development presupposes responsible freedom, development is a common human vocation, development must be integral (that is, it must "promote the good of every man and of the whole man"), and true development must not be confused with the secular utopias of mere wealth-accumulation or institutional reform.

In the second chapter Benedict offers an analysis of human development in our time. Wealth is growing, lifting many billions of people out of misery, but inequalities are simultaneously on the increase. Richer countries protect their privileges (for example, with regard to intellectual property) while in poorer countries cultural and social patterns persist that hinder development. More than economic and technological progress is needed: states, markets, cultures—all of them need a strengthening of institutions and of networks of institutions, none of which is possible without respect for and openness towards the gift of human life, deeper reflection on the meaning of these institutions, and closer attention to our global interdependencies, all "within the perspective of that 'civilization of love' whose seed God has planted in every people, in every culture."

In the third chapter Benedict offers an economics of the gift, arguing that the norm for economic life goes beyond mere frugality, mere justice in exchange, and opens up towards generosity, because of divine generosity. Our economic lives, in the light of the gospel, require an economics of hope: "As the absolutely gratuitous gift of God, hope bursts into our lives as something not due to us, something that transcends every law of justice." For markets to fulfill their proper economic function, they require "internal forms of solidarity and mutual trust": "Authentically human social relationships of friendship, solidarity, and reciprocity can also be conducted within economic activity, and not only outside it or 'after' it." The market is human, and therefore demands ethical structure and governance.

Benedict applies this economics of hope in his study of the internal functioning of markets, the interactions among markets, states, and civil society, the emergence of hybrid forms of commercial behaviour (what are sometimes called social enterprises), investment practices, and international aid. In the process he paints a picture of a new kind of globalization, in which "we should not be [globalization's] victims, but rather its protagonists," committed to "promote a person-based and community-oriented cultural process of worldwide integration that is open to transcendence."

In the fourth chapter Benedict elaborates some of the implications of his teaching for the structure of the global economy and for our stewardship of the natural environment, which he describes as "a wondrous work of the Creator containing a 'grammar' which sets forth ends and criteria for its wise use, not its reckless exploitation." In the fifth chapter he elaborates his vision of a different kind of globalization, marked by religious freedom, subsidiarity, and authentic inter-cultural encounter, and in the sixth he explores technology, especially the technologies of social communication, once again returning the investigation to a consideration of what it means to be human in the face of the many new things in our time.

In his conclusion, Benedict reminds us again that all development demands a turning towards the love of God in Christ, and in that light calls for a blessing so that we may "continue to dedicate ourselves with generosity to the task of bringing about the 'development of the whole man and of all men'."

Following this essay you will find Doing the truth in love: an evangelical call for response to Caritas in Veritate. The responses to Benedict's teachings have been forthcoming, sometimes in forthright criticism of the encyclical (often for being inadequately enthusiastic about the economic promise of markets or excessively enthusiastic about the political promise of international governance through the United Nations and similar institutions), sometimes in the form of academic debate (including 2010 conferences at Regent College in Vancouver, B.C., and at Princeton University), sometimes through personal and communal action.

More than a century ago, Leo XIII, through his Rerum novarum, evoked a conversation about Christian social and economic responsibility that included a social congress in the Netherlands at which Abraham Kuyper delivered a justly famous address on the problem of poverty, and out of which grew both Roman Catholic and Protestant social movements that decisively shaped Christian engagement with European culture in salutary ways under the very difficult circumstances of radical and rapid secularization. We might hope that as the church grows and flourishes in new places around the world, and as humanity becomes increasing internationally interdependent, that such an ecumenical conversation between orthodox Christians will continue, with the social encyclicals of the Roman bishops as an integral part, and with communal cultural efforts toward "a civilization of love" as its result.

Click here for "Doing the truth in love: an evangelical call for response to Caritas in Veritate".