Richard Greydanus looks at Wendell Berry's "romanticizing" the family farm, and asks if, instead, we can understand farming as one among several of the potentialities to be "cultivated" or developed from creation.
by Richard Greydanus

Wilma Van der Leek has responded to my appraisal of Wendell Berry's agrarian critique of modern industry, and finds fault with my portrayal of Mr. Berry's thinking as reflecting "a romantic return to the soil." While I have no trouble acknowledging that such a romanticism is not his intent, I do think that romanticism is where Mr. Berry inadvertently ends up.

The reader who quickly skims over Mr. Berry's many writings may easily conclude that he sees an unavoidable struggle between localities and particularities, on the one hand, and industry, corporations, globalization on the other. This is because industrial complexes and corporations are metaphors for the basic problem Mr. Berry believes the modern world presently faces. For example, he will say, "I believe that this contest between industrialism and agrarianism now defines the most fundamental human difference." Or, "The way of industrialism is the way of the machine . . . Because industrialism cannot understand living things except as machines . . . it cannot use the land without abusing it." And, as a final example, "The industrial economy thus is inherently violent." Nowhere can the terms "industrial" or "corporate" be found to be described positively.

A superficial reading leads us to conclude that Mr. Berry has no use for industry; that industry is necessarily de-personalized and has no concern for local circumstances, that by its very nature industry cannot help but rape local economies on which long-term sustainable human life depends. A superficial reading of Mr. Berry makes it hard to interpret him as anything but a romantic.

But Ms. Van der Leek protests romanticizing Mr. Berry's thought and points to a meaning obscured behind the—depending on one's perspective—troublesome or provocative terminology. Indeed, there is a deeper meaning; and I have no real difficulty admitting as much. Mr. Berry looks at the many abuses of the natural environment (and material resources found therein) and sees a problem. He looks to restore humanity to a healthy relationship with the natural world.

I will take no issue with Mr. Berry's diagnosis of the problem. Even in his statement that "the way of industrialism is the way of the machine" I can find a good deal of truth. Mechanical theory has historically under-girded much of the philosophical justification of industrial practice. This was accompanied by an overestimation of humanity's ability to master nature, and nature and humanity are both de-valued while God is eliminated from the picture. Mr. Berry should be applauded for taking issue with the spirit behind the industrialist mindset. Any statement he makes to the effect that industry as such is not to blame is buried beneath his unfortunate choice of terminology.

I am more hesitant to embrace his prescription. Both Mr. Berry and Ms. Van der Leek believe the family farmer provides an example par excellence of the spirit necessary to combat the industrial mindset. As Ms. Van der Leek says, "the small family farmer accepts and lives within limits." For the two of them, a solution finds its starting point, here, that is concerned with the local. She quotes Mr. Berry:"authentic and responsible thought is not restricted to the local or regional but does depend on the clarity and precision that comes from sustained attention to the particular." However, this theoretical starting point, the spirit of agrarianism, is as problematic as the spirit of industrialism.

We proclaim that Christ is Lord over all of human life. A more suitable starting point for a Christian response to the spirit of industrialism is a view of a life that integrates local, industrial/corporate, and even global expressions of that life. To start from a particular part of this equation introduces conflict between the different parts. Because the Gospel is the message of redemption and reconciliation, proclaiming an integral vision of human life and its many potentialities is our first priority, our starting point.

There is still something more to be said to nuance the discussion. Both Mr. Berry and Ms. Van der Leek recognize the need to develop a long-term sustainable relationship with the natural environment. By identifying the family farmer as the person best equipped to steward natural resources, they appear to have recognized the material foundations of society. That is, no matter how "civilized" we are, our livelihood still depends on natural resources. The sudden jump in gas prices in the past few weeks across North America in the wake of Hurricane Katrina is an excellent example of this dependence.

We can demonstrate humans lived "local" lives long before they lived industrial, corporate, or global ones. Nor is it very difficult to demonstrate from history the precarious nature of the material foundations of our society, recent events in New Orleans aside. Historically, the "local" takes priority, but history also shows that human life can be blessed when we move beyond the local. The Cultural Mandate calls us to care for God's creation; but also to cultivate and to develop the potentialities hidden in creation. Looking to the future, the cultivation of creation (as development) is as important as its care. Indeed, created in the Image of God, for humankind, the care and cultivation go hand in hand: the care and cultivation of both localizing and globalizing potentialities.

Richard Greydanus started a Masters of Philosophy in 2006 at the Institute for Christian Studies in Toronto. This effort follows previous degrees from McMaster University (Masters in History) in 2006 and Redeemer University College (B.A., Honours History & Philosophy majors, Classical Studies minor) in 2005. 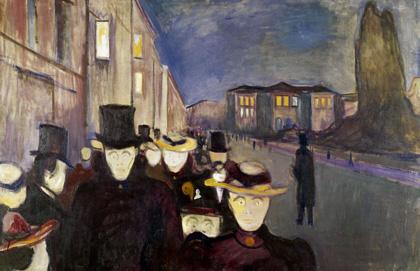 We all want to know and be known, but nobody today knows how.