She's credited with single-handedly removing God, guilt, and any cultural taboo associated with sex outside of marriage. I am stunned that no one at CNN, CBS, The Wall Street Journal, The New York Times, The Atlantic, or Salon has any helpful moral critique of her portrayal of what's "good". 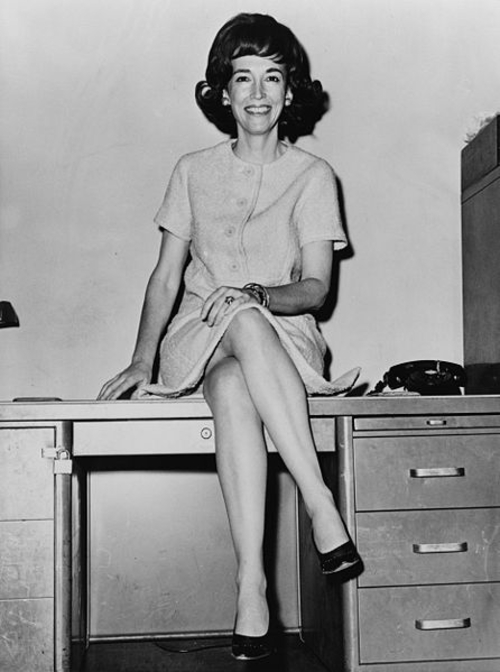 Editor's Note: This article was originally printed on The Washington Institute's website, and is reprinted with permission.

Whatever you read or watch about Cosmopolitan Magazine's International Editor Helen Gurley Brown who passed away two weeks ago, one thing's for sure: she's got mythological status. She's a rags-to-riches story, the hardworking girl-next-door who makes it big and dies at 90 with a 19-year-old's body and boudoir. In one of many memoirs, she recounts her childhood as an ugly-duckling who kept her nose to the grindstone and graduated high school valedictorian, then college. She came back home and saved her starving mother and polio-stricken sister by sleeping with bosses and co-workers to gain furs and apartments. At 37, she married Hollywood movie mogul Harold Brown, who encouraged her to write a book about everyone she shamelessly slept with prior to their marriage. Her story became a movie and—poof—she's the editor of Cosmopolitan without any editing experience whatsoever. Her Midas touch launched the magazine to stardom, where today it remains the number one women's magazine in the world. It is published in thirty-two languages, one hundred countries, and earned almost 400 million dollars in ad revenue last year.

Gurley Brown may be the sexual revolution's conflation of Jean Valjean and Hugh Hefner morphed into female form, and even after her death the show she started must go on. NYC mayor Michael Bloomberg said Gurley Brown not only changed "our entire media forever, but the nation's culture as well." She's credited with single-handedly removing God, guilt, and any cultural taboo associated with sex outside of marriage, so women are free to have lucrative jobs, and all the sex they want, with all the partners they want now and forever more. Her pioneering efforts also firmly placed women's nearly bare breasts alongside cutlines for multiple orgasms smack dab in the centre of grocery aisle-parlance while all of us check out.

And the lies and cutlines continue even after her death.

Her early life certainly was hard. Her father, who was a state legislator in Arkansas, died an accidental death when Gurley Brown was 10. It was during the Great Depression, and she and her grieving mother moved to California with an aunt, where Brown's sister contracted polio. After business college, Brown worked multiple jobs as a secretary before landing at a prestigious ad agency where she became one of the highest-paid copy writers in the 1960s. She understood the power of words, plus the power of persuasion, and as anyone who's watched Mad Men knows, sex sells. By becoming the third wife of Harold Brown, she gained a wealthy and powerful advocate who pitched their ideas to Hearst Publications. When Helen got the job as Editor-in-Chief of Cosmo, her husband helped choose manuscripts and write tag lines for every cover of the American edition until 1997.

As a young, single woman, Brown struggled considerably on her own, and for anyone who's alone, the vulnerability can feel scary and overwhelming. But she was also smart and gained the help of a propitious marriage at the cusp of a culture tripping over itself to award and applaud sexual immorality. Every decade of her career, she won prestigious awards for her "contributions to journalism," and elevated the status of sexually active working women everywhere. She and her husband gave 30 million dollars to Stanford and Columbia Universities to establish the Harold and Helen Gurley Brown Institute for Media Innovation.

So the lies continue, lies about what journalism, philanthropy, and good living truly is.

Gurley Brown's cultural prestige is particularly troubling given many of the shocking statements she made in her lifetime. It was part of her shtick, part of what got publicity, what sold then and still sells now. In her book The Late Show published in 1993, she advised women over fifty to borrow friends' husbands for "jaunty recreational sex" because available men at that age are sparse.

While I don't know about you, I have been with friends when they learned their married fathers had sex with someone other than their mothers during their fifties. These young men and women came home from college to see their mothers crying in a heap on the kitchen floor. It's certainly not a picture for a magazine cover, nor did anyone in those kitchens feel empowered or jaunty. Not even sexy. So how did we miss Gurley Brown's point so badly?

Brown never had any children nor did she want any, so she never personally faced the impact recreational adultery has on them. She did admit, however, that she and her editorial staff were often "laughing our butts off" at the hyperbole and sexual hype Cosmo perpetuated. This hyperbole created sales, fame, and fortune—and according to Mayor Bloomberg plus female biographers of Brown's life—it created an emancipated culture for which we should all be grateful.

As a former journalist, a part-time counsellor, and sexually active—albeit married—woman born into the world Gurley Brown is credited to have birthed, I find myself not only angered by the lies lauded at her death, I am stunned by how few have remarked on this aspect of her legacy. Is there no one at CNN, CBS, The Wall Street Journal, The New York Times, The Atlantic, or Salon who has any helpful moral critique of her portrayal of what's "good"? Are we simply adhering to, "Never speak ill of the dead," or are we as nation simply too ill to speak?

You don't have to be a Christian to critique Cosmo's lie that promiscuous sex is our highest good. But apparently, America's popular voice has no comment to the contrary. As Christians, how do we offer up something far better than "Good Girls Go to Heaven—Bad Girls Go Everywhere"? That guilt is passé and sluts are sublime?

You can try a million things: sociology statistics, your personal story, or introducing people to Jesus Christ. You can talk about the ancient Greeks, their definition of the highest good, or the nihilism of Nietzsche. You can unmask Freud's cocaine addiction and assisted suicide, or you can quote Bono who sings about resisting temptation in "Vertigo." But collectively pray for the courage, the hope, and even the tears to start talking. More stories than Cosmo's need to be out there, but one thing's for sure. You'll have to tell the truth about what is good and what is bad, and prepare to be mocked.

The Psalmist in Psalm 73 says the arrogant "set their mouths against the heavens, and their tongue struts through the earth." With Brown at its helm, Cosmo strutted across the world's stage, laughing at the monogamous and the abstinent, and indirectly at the celibate Jesus and his commands. But the Psalmist goes on to say that God will determine the end of the arrogant who prosper in this life or to use Gurley Brown's mantra, "go everywhere." Then he says in conclusion, "but as for me it is good to be near God; I have made the Lord God my refuge that I may tell of all your works."

What would have happen if instead of tag lines on positions in bed or how to earn our first million or juggle a work schedule with satisfying hook-ups, we worked to put the goodness of God who comes near to us in Jesus in front of the eyes and ears of popular culture?

Helen Gurley Brown published a glossy magazine with 300 pages every month for 47 years, and beyond the grave her lies continue, while the silence of saving truth is deafening.

Shannon Geiger formerly worked as a newspaper reporter and currently is a counsellor at Park Cities Presbyterian Church. She also serves at Cristo Rey, a bilingual church-plant in Dallas where her husband, Josh, is the pastor.

May 30 th 2012 by Milton Friesen and Michelle Friesen