Musings on the Maudlin

What are the risks of an over-sentimentalized worldview?

She is known as Jesus' foremost female disciple, but she is also known for her voluminous tears. If Jeremiah is properly known as the "weeping prophet," then perhaps Mary Magdalene should also be known as the "weeping disciple." Note the italicized words in this passage from the gospel of John 20:11-18.

But Mary stood outside the tomb crying. As she wept, she bent over to look into the tomb and saw two angels in white, seated where Jesus' body had been, one at the head and the other at the foot.

They asked her, "Woman, why are you crying?"

"They have taken my Lord away," she said, "and I don't know where they have put him."

At this, she turned around and saw Jesus standing there, but she did not realize that it was Jesus. "Woman," he said, "why are you crying? Who is it you are looking for?"

Thinking he was the gardener, she said, "Sir, if you have carried him away, tell me where you have put him, and I will get him."

Jesus said to her, "Mary." She turned toward him and cried out in Aramaic, "Rabboni!" (which means Teacher).

Jesus said, "Do not hold on to me [the famous—'Noli me tangere'], for I have not yet returned to the Father. Go instead to my brothers and tell them, 'I am returning to my Father and your Father, to my God and your God.'"

Mary Magdalene went to the disciples with the news: "I have seen the Lord!" And she told them that he had said these things to her.

It's interesting to note that the English word "maudlin," which refers to that which is overly, even sickeningly sentimental, comes by the long, circuitous route from the Maudelein of Middle English to the Magdeleine of Old French all the way back to the Latin and Greek Magdalene. "Maudlin" is thus derived from Magdalene—indeed, from Mary Magdalene, Jesus' foremost female follower, the weeping disciple! And indeed, classical painters usually depicted Mary Magdalene (or Maudlin) with red, swollen eyes as she wept profusely for her sins and out of gratitude for her Saviour.

Today, we are surrounded by the maudlin. There are dangers inherent in the maudlin (or overly-emotional or sentimental) character of much of Christian art, whether in music, literature, or the visual arts—my students often use the word "cheesy" to describe it. We need to be aware not only of the presence of such sappiness in Christian art, but also its pervasive presence in evangelical Christianity, and certainly in our culture at large.

But first another word or two more about the maudlin. (These thoughts parrot some remarks by Alan Jacobs in an interview on Mars Hill Audio Journal, Volume 100.) The maudlin is more than excessive sentimentality: it is the deliberate cultivation of and indulgence in emotion that does not square with reasoned reflection on truth and reality. It is intentionally-generated emotion in excess of what is appropriate for a given situation as dictated by a proper epistemology and metaphysics—that is, by genuine wisdom. This is not a criticism of emotion per se, but of excessive, ungrounded emotion; it is not to be cynical of feelings, but to question feelings that deceive. We must not advocate an excessive rationality—"a murdering to dissect" (Wordsworth), but we ought to encourage to necessary thought and reflection on whether emotions proposed for our consideration and experience are misleading, prone to spawn behaviour that is, at the end of the day, baseless and even unchristian.

For example, Robert James Waller's potboiler novel The Bridges of Madison County (which was one of the best selling books of the twentieth century, at fifty million copies) describes a four-day love affair between National Geographic photographer Robert Kincaid and disillusioned immigrant Francesca Johnson, whose husband and children are temporarily out of town.

Sentimentality of this maudlin sort encourages readers to set aside any thoughts or reflections that such a story raises, instead encouraging readers to wallow in the emotion of it all, to go with gut feelings, perhaps as potential justification for actual or potential adultery. (One book discussion club asks: How many of you cried at some part of this novel? Which part? And I would add, why?)

A maudlin sentimentality that bypasses reason, reality, and reflection and counts on an indulgence in mere emotion to carry the day, would bypass questions such as these: Could a four-day love affair really serve as an adequate basis for a lifetime of love? What view of love is implicit in such a scenario? Could such a brief illicit relationship ever really make Francesca a better wife and mother as she claimed?

Probably not. The sentimentalist knows this, but employs his or her sentimentalism to avoid thinking deeply about such things—and the result is self-deception. As William Butler Yeats once said, "The rhetorician would deceive his neighbours, the sentimentalist himself." Maudlin books like The Bridges of Madison County (surely you can think of more examples) encourage such self-deception and thus manipulate not only feelings, but also actions.

Why, I wonder, are we as human beings are so susceptible to the sentimental, to the maudlin? Why did 50 million people buy copies of The Bridges of Madison County? Furthermore, how is the sentimental and the maudlin employed to great effect by politicians? By advertisers? By evangelists, preachers, and teachers in the church? What are its consequences? By what conscious or unconscious measures can we avoid it?

In the Psalms we find an excellent counterexample to the maudlin and oversentimental. The Psalms cause us to reflect deeply on God and his mighty deeds and thus foster a deeper love for him. As a result, they show us a better way—a non-sentimental, un-maudlin, yet deeply emotional way—which we might well follow in our writing, speaking, teaching, and art. Consider this example:

The LORD is my shepherd,
I shall not want.
He makes me lie down in green pastures;
He leads me beside quiet waters.
He restores my soul;
He guides me in the paths of righteousness
For His name's sake.
Even though I walk through the valley of the shadow of death,
I fear no evil, for You are with me;
Your rod and Your staff, they comfort me.
You prepare a table before me in the presence of my enemies;
You have anointed my head with oil;
My cup overflows.
Surely goodness and lovingkindness will follow me all the days of my life,
And I will dwell in the house of the LORD forever.

As Augustine says, "God's voice is in the Psalms—a voice of groaning, a voice of rejoicing in hope, sighing in its present state—we should know his voice thoroughly, feel it intimately, make it our own." Go, therefore, and create likewise!

Dr. David K. Naugle is chair and professor of philosophy at Dallas Baptist University where he has worked for 23 years in both administrative and academic capacities. He earned a Th.D. in systematic theology, and a Ph.D. in humanities with concentrations in philosophy and English literature.

Making what is needed, restoring what is broken. Could Jesus' humanity by reflected more authentically than in his role as a carpenter? 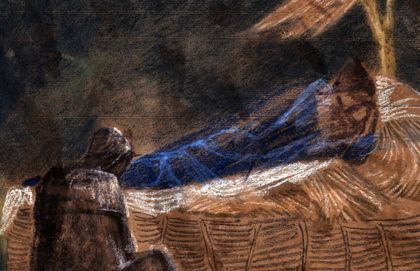 Jesus Is a Jew

The ineffable becomes intelligible in Israel.