Peace I Give To You (video) 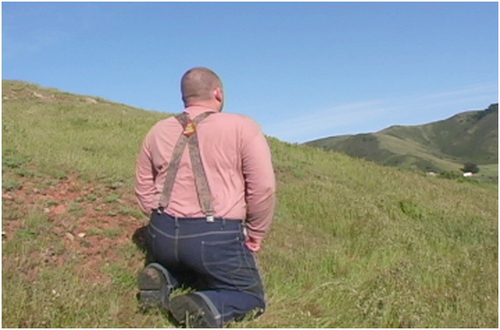 "In Mel Day's video, Peace I give to you, Ehren Tool, a former U.S. Marine strides into an idyllic Western American landscape of rolling, green hills singing the old Christian hymn 'Peace I Give to You.' He reverentially kneels as if he is beginning a very gentle ritual, but his subsequent brutal roll down the hillside seems to be a way of merging into the earth and of thrusting peace into the American landscape. Like a desperate, absurdist Ana Mendieta, he plunges his body violently into the effort of what would otherwise seem like a playful act. The peaceful California landscape, his lumberjack-like attire and the old-time hymn suggest romantic portrayals of early American westward expansion and the Christian ethos that framed it and at times justified its more exploitive practices. The pain and breathlessness we hear as he continues rolling and singing is at sharp variance with the noble sentiments of the song, but also reminds us how exhausting it is in these times to work for peace and maintain hope or faith of any kind. Day, in all her work, addresses a radical ambivalence in the status of Christian faith in the US whose ostensible messages of peace are often co-opted as moral cover by the right wing for a violent agenda."—Valerie Imus, Curator of Hopeless & Otherwise, Southern Exposure, San Francisco 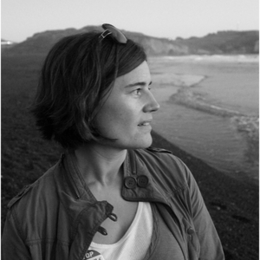 Hummed, whistled, or sung, Mel Day's recent work is preoccupied with the idea that two different states can exist simultaneously. Something is there and not there, is known and not known. Faith and doubt exist at the same time. This radical ambivalence brings with it deepening mystery and unlikely hope.