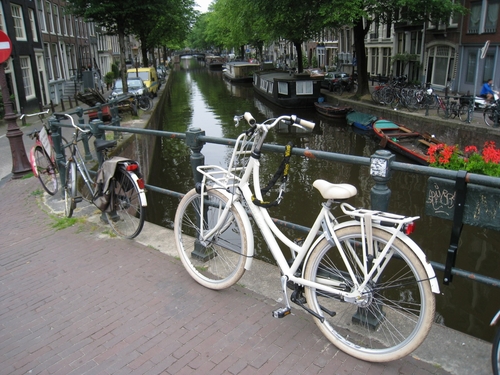 The Kingdom of God is defined by right relationships. Transit—how humans move through space—is a microcosm for how our norms and values are being shared.

I trailed him for at least a dozen blocks through the streets and narrow alleyways of Amsterdam. He turned left; I turned left. He turned right; I turned right. He kept to the right of the lane; I kept to the right of the lane. He slowed down; I slowed down. He looked both ways; I looked both ways. He stopped; I stopped—and smiled, somewhat sheepishly. I was an urban bike rider in training.

This past summer I was in Amsterdam, and later in Copenhagen, on a trip funded by the Calvin College Alumni Association to study the bike infrastructure in those fair cities. Both cities are known for their biking cultures—more than 50 percent of the commutes in their city centres are made on bicycles. Almost everyone, it seems, owns and uses them: parents taking their kids to school in cargo bikes, students getting to university classes, professionals gliding to work with cell phones in hand, shoppers going to and from the market with baskets brimming.

The Dutch often complain about clueless tourists on bikes. Not wanting to be one of those, I rented a stealth bike in Amsterdam—without a weird paint job or obtrusive rental company sign—and trailed the natives until I got the hang of things. Bike commuting in these cities definitely requires a higher level of what military people call "situational awareness." You have to track pedestrians, busses, trams, and cars in addition to hoards of fellow bicyclists. But once you get into the zone, it's a positive pleasure to sail through town on two wheels in cities where biking is not only tolerated but encouraged.

I think transit—how humans move through space—is one of those issues. And I think that transit by way of bicycles—wherever feasible—comes out on the positive side of these considerations. It makes transportation an option for those who cannot afford a car, or a second car; it uses no fossil fuels and does not pollute the air with its emissions; it works regular physical exercise into the routine of life; as a rule, it does not kill pedestrians; it is quiet and unobtrusive; it does not fill cities with the dead space of massive parking garages and vast expanses of surface parking; and, when it reaches a certain scale, there is even something positively festive about it. The Christian community should care about these things for Christ's sake; and the Christian community is well positioned to play a significant role in the forming and reforming of shared public space. Clearly the development of a decent bike infrastructure should be high on its urban agenda; that infrastructure is lacking in most of the public spaces we inhabit.

There are many reasons why we in North America have not gone for commuter biking in a big way. One big reason is that it doesn't look or feel safe. Most of our roads were designed for cars, not bikes and cars. This is where we might have something to learn from our northern European counterparts. They've devoted a good deal of thought and effort to making way for bikes in cities with the advanced design of an urban bike infrastructure.

Amsterdam and Copenhagen not only have bike lanes, they have lots of bike paths. Bike lanes are created by painting a stripe down the street, marking the part of the roadway where bikes are given preference. But bicyclists are still exposed to moving car traffic on their left and often to opening car doors on their right. Bike paths, by contrast, are separated from auto traffic by a physical barrier of some sort—a curb, a median, or a line of parallel-parked cars. Bike paths are safer and, on average, they increase ridership by 30 percent over bike lanes.

The favoured form of bike paths in both cities is an extension of the sidewalk. Typically, the sidewalk takes up about eight to ten feet, then drops about three inches at a bevel, then extends five to eight feet for the bike path, then drops straight down four to six inches to the street. After that, the roadway space is given over to parallel-parked cars or moving traffic.

Bikes are also given special treatment at intersections, where potential conflicts arise. Here, bikes going through an intersection will cross the path of right-turning cars; bike riders wanting to make a left turn will cross the path of through car traffic. In many cases, the cities of Amsterdam and Copenhagen handle these conflicts with special traffic signals for bikes. Bikes are given a green light while the right-turn red light is on for cars; bikes are given a green left-turn light while red lights stop through car traffic in both directions. In the absence of a special left-turn light, bicyclists will often execute what's become known as a "Copenhagen left"—a two-stage left turn where the bicyclist goes just over halfway through the intersection, pivots left, stops, and then waits for the green light. In Copenhagen, residents learn how to do this in elementary school. As in Denmark, so in Holland: all school kids learn how to ride bikes properly in school. It's part of their education.

The urban bike infrastructure as we know it today has not always been there. Prior to and during World War II, bike ridership in the city of Amsterdam counted for over eighty percent of the commutes, the rest taken up by rail and trams. After the war, with a strong economic recovery and the widespread adoption of car ownership, bike ridership dropped precipitously. Cars clogged the streets; bike fatalities were on the rise. Eventually, in the 1970s, the bike community became militant, sponsoring citywide protests and demanding dedicated space for bikes in the public rights of way. In 1978 the government got the message and agreed to prioritize the development of the bike infrastructure we see today. Bike routes were planned, and, over the course of thirty years, as streets came up for reconstruction, the system was built, refined, and extended.

The numbers are even more striking in Copenhagen. In the Danish capital, bikes outnumber people 560,000 to 519,000, and a full eighty-five percent of the commutes in the central city core are made on bikes. Today Copenhagen boasts 350 kilometers (217 miles) of bikeways, and there are plans for bike "superhighways" to bring more people into town from outlying regions.

The city of Copenhagen not only manages bike traffic well, it goes out of its way to encourage it. On a number of its major bike routes, the "Green Wave" (the timing of traffic lights to minimize stops) is set for bikes rather than cars. When it snows, the bikes paths are plowed first with only four exceptions, where bike paths and streets are plowed simultaneously. Although city officials are not averse to using the stick when it comes to the enforcement of traffic laws for bicyclists, they will often use the carrot instead. Recently city spotters went out on the streets of Copenhagen with bags of chocolates, rewarding bicyclists for obeying the rules at intersections even when it was tempting to break them. Copenhagen police went on a "Hugs and Helmets" campaign, giving free bike helmets and hugs to bicyclists as they stopped at intersections. (Helmets are not required; but they are encouraged—in this case, quite creatively.) A great deal of thought and creativity has also been devoted to bike amenities: two-storey municipal bike racks; metal tracks on the stairways down to the metro stations to accommodate bike wheels; foot and hand rails to lean on at intersections while stopped for a red light; and, my favourite, dedicated trash cans along the bike paths, elevated and tilted to meet the right hands of bicyclists who have just finished their lattes on the way to work or school.

We might think the Danish investment in urban bike infrastructure must be the result of a different moral culture, a stronger environmental ethic, or the presence of higher ideals. That may be the case. But it probably isn't. The Danes are very good at tracking data. They recently conducted a survey of bike commuters, asking why those commuters chose to ride bikes rather than drive cars. Only one percent said they did so to make for a better world. The rest said they did so because biking was relatively cheap, fast, convenient, pleasant, and safe—all practical considerations. The city also conducted a detailed cost/benefit analysis of bike commuting for itself, taking all external costs into account (such as road attrition, surface parking area required, pollution, public health, and the like). The result: the city saves 3.14 DKK (about .53 USD) for every kilometer biked rather than driven. As it turns out, supporting bike commuting with good infrastructure is not only the right thing to do on many counts. It's the smart thing to do. It's also a good thing to do—a concrete way of anticipating that coming city.

That's a lesson waiting to be learned by many North American cities. 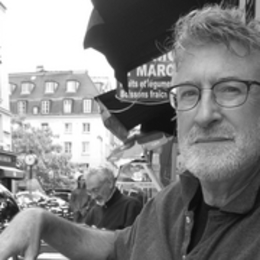