The research identity is a powerful allure, flattering people that they have cutting-edge brilliance. Few of them readily trade the graduate seminar for the composition classroom. But we have reached the point at which the commitment to research at the current level actually damages the humanities, turning the human capital of the discipline toward ineffectual toil.

As Mark Bauerlein notes in his recent Chronicle of Higher Education essay, "The Research Bust," scholarly output in the humanities has exploded in the last half century. As a consequence, Bauerlein's own field of literary studies has reached what he describes as "a saturation point": there are simply too many scholarly articles and books being published, many of marginal quality, and no one can keep up with them all. At the root of this problem lies the fact that advancement in the typical college or university1 has been tied to the production of a certain (and high, in Bauerlein's view) number of peer-reviewed publications—often six articles and one scholarly monograph in order to earn tenure. The result of this quantitative pressure is the generation of far too many articles and books that are of questionable quality and hence of limited utility. In Bauerlein's estimation, the system is in need of reform, with quantitative standards for advancement replaced by qualitative measures, and with effective teaching elevated to a position of importance in the evaluation of professorial performance.

Bauerlein's essay raises important questions about the state of affairs within the research university, many of which are suggested in the comments on the online version of his article. However, his essay also serves to suggest some questions that might be asked of the Christian liberal arts college or university. For whether those of us who work in or attend these sorts of institutions know it, they have been influenced in the last century by the prevailing paradigm of the research university. Hence, we ought to be quick to ask: What differences are there, or should there be, between the Christian college and the research university? What are the ends of these institutions? And what implications do these ends have for the place of research in the Christian liberal arts college?

In order to take up these questions, I propose to do three things in this essay. First, I would like to sketch very briefly the history of the research university, setting it in the context of older forms of higher educational institutions. Second, I would like to review the nature of and purpose of specifically Christian colleges and universities. Finally, based on this summary review of the history of the research university and the purpose of the Christian college, I hope to draw some conclusions about the role that research ought to play in the Christian college. I hope this effort will serve to stimulate some thought among faculty, administrators, and students alike on the purpose of the educational work they undertake in our Christian colleges and universities.

The research university is a relatively new development in the history of western higher education. Born out of Enlightenment ideals, it first gained institutional manifestation in the German research university of the nineteenth century. Americans soon picked up on the model, with notable new institutions being founded on it—for example, Johns Hopkins University, the University of Chicago, and Stanford University—and old institutions being reshaped in accordance with it—perhaps most notably, Harvard University under the leadership of President Charles Eliot.2 The research university, in Germany, America, and elsewhere, celebrates individual accomplishment, the making of knowledge, and the dissemination of information and skills. It cherishes the virtues of diligence, precision, productivity, calculation, control, ambition, rationalism, and individualism. The faculty member in the research university pursues "pure knowledge," largely unencumbered by concerns beyond the acquisition of that knowledge, and distributes that newly discovered knowledge to an audience of fellow experts. Novelty and discovery are valued above all else.

The research university ideal was most famously articulated in the German sociologist Max Weber's famous 1918 address at Munich University, "Wissenschaft als Beruf."3 The title of this address alone is indicative of the character of the scholarly ideal of the research university. Often translated "Science as Vocation" or "Scholarship as Vocation," the title literally means "Knowledge-making as Vocation." This very direct translation gives a good sense for the ideal Weber lays out in this address—one that celebrates the individual scholar's research activity, his discovery or production of new knowledge, as the true academic calling.

Because this model of academic knowledge-making was effective in generating scientific advances, it became the dominant model for higher education in the twentieth century. As Anthony Kronman has observed in Education's End:

The production and dissemination of scholarship is today a central, organizing principle of higher education throughout the world . . . This is clearest in our large universities, which are consciously directed toward the production of research and whose teachers are appointed and promoted primarily on the basis of their scholarly achievements. But the pull of the ideal can be felt in our liberal arts colleges too.

This model's emphasis on research productivity is reflected in the standards that have been adopted for tenure and promotion both in research universities, properly speaking, and in many supposedly undergraduate-focused colleges and universities. While some attention may be given to teaching or service—the other two legs of the commonly accepted triad of professorial contribution—it is undeniable that publications are what make an academic career in most colleges and universities. The oft-repeated slogan "publish or perish" is indicative of the pressure placed on faculty members to adhere to this particular scholarly ideal. And the negative consequences of this emphasis on research have begun to become evident in American higher education.4

Christian colleges as we know them today—and here I am thinking primarily of the 115 North American institutions that comprise the Council of Christian Colleges and Universities—generally follow the model not of the research university, but of the liberal arts college.5 I recognize that it is dangerous to generalize about such a large group of institutions, but none of the institutions in the CCCU is, by the Carnegie classifications used to categorize institutions of higher education, a research university. Further, most bear greater resemblance to the liberal arts college than to any other historic type of academic institution. In that resemblance, they hearken back to a model of higher education much older than the research university. That model has its roots in the medieval monastic schools, and can be traced through the late medieval and early modern universities to the colonial liberal arts college. Programmatically speaking, the colleges of the colonial era inherited the focus of the earlier European universities on undergraduate education. They also inherited the residential college structure of those earlier institutions. Finally, the colonial colleges were, like their medieval forebears, concerned for the moral and spiritual formation of their students.

The abandonment of this holistic aim in American higher education has been ably chronicled by Julie Reuben, a professor in Harvard's Graduate School of Education, in her book The Making of the Modern University.6 There she traces the secularization of the American university in the late nineteenth and early twentieth centuries, and the related loss of concern for moral formation on American university campuses. In Reuben's reading, faculty in these institutions increasingly adopted a view of knowledge that divorced the true from the good and the beautiful, and hence justified faculty abandonment of concern for much beyond their individual contribution to the edifice of human knowledge being erected by scholars around the world. The prevailing mentality of faculty in American universities—all of them trained in research universities—has been ably summed up in an article entitled "Universities Have an Obligation to Help Students Learn How to Lead Ethical, Fulfilling Lives," by former Harvard University president Derek Bok. In it, he says, "Professors . . . are trained to transmit knowledge and skills within their chosen discipline, not to help students become more mature, morally perceptive human beings."

This paradigm for the faculty's role in the research university remains dominant to this day. In a delightful preface to his excellent book, Exiles from Eden,7 former University of Chicago philosophy professor (and now dean of the honours college at Valparaiso University in Indiana) Mark Schwehn relates his discovery of that fact that while he, as a young, tenure-track professor at Chicago, regarded himself as a college teacher first and foremost, it became plain to him that none of his colleagues shared his view of the calling of a university professor. Schwehn goes on in this book to critique the prevailing virtues of the research university—the legacy of Weber's Wissenshchaft als Beruf—and to suggest that the Christian academic might adopt much older, monastic virtues for the formation of his scholarly calling.

The virtues for which Schwehn advocates—humility, faith, self-denial, and charity—can and should inform the calling of the individual Christian researcher. However, they can also serve as guides for the work of a Christian academic institution, both establishing expectations for the culture of the community and defining some important ends for the educational program. When combined with a vision for the end of Christian higher education that is older and more holistic than that of the secular research university, they work to create an institutional ethos and trajectory in which the production of knowledge for knowledge's sake alone cannot be an aim.

Sadly, these virtues are rarely trumpeted on research university campuses. In fact, as Schwehn argues, "the modern university in its present form militates against some of the very purposes that it occasionally espouses." Those occasionally espoused purposes—the spiritual and moral formation of students—are central to the mission of Christian colleges and universities.

1 A disclaimer: I am writing out of an American higher educational context—one in which the terms "college" and "university" carry different meanings than they do north of the border. Whereas in Canada, colleges are typically vocational or technical schools and universities provide broad, liberal education, in the United States, both colleges and universities can offer either narrow technical education or broad, liberal education. I trust that Comment's many Canadian readers—often more perceptive about subtle cultural distinctions than those of us who live south of the border—will have no trouble translating my frequent slips into American usage of these terms.

2 For more on Eliot's transformation of Harvard, see Harry Lewis, Excellence Without a Soul: How a Great University Forgot Education (New York: Public Affairs, 2006). Given Harvard's status in American higher education, that institution's adoption of the German research university model served as a catalyst for the transformation of numerous other American educational institutions, both research universities and purportedly undergraduate-focused liberal arts colleges.

3 An English translation can be found in Max Weber, "Scholarship as a Vocation," in H.H. Gerth and C. Wright Mills, trans. and eds., From Max Weber: Essays in Sociology (New York: Oxford University Press, 1977), 129-56.

5 For more on the liberal arts model, and on the distinct economic pressure that this model is coming under, see Victor E. Ferrall, Jr., Liberal Arts at the Brink (Cambridge and London: Harvard University Press, 2011).

6 For additional background on the roots of the modern university, see William Clark, Academic Charisma and the Origins of the Research University (Chicago: University of Chicago Press, 2007).

7 For another helpful introduction to the research ideal in the modern university, see Kronman, esp. 91-136. 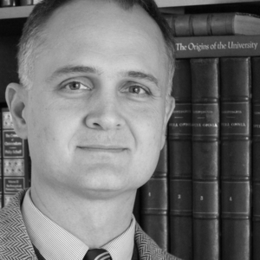 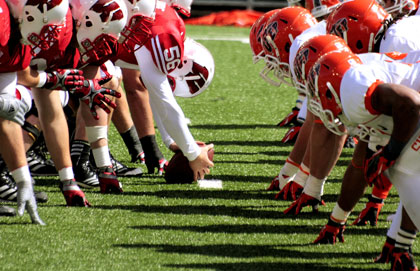 Paideia on the Practice Field

Stadiums are at the heart of our universities. Who's getting played here?

Muscle Memory and the Frenetic Student 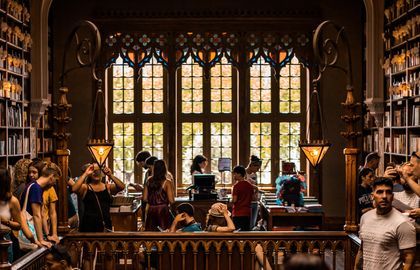 A Comment symposium on academic-borne friendships that beat the odds.