by Steve A. Prince 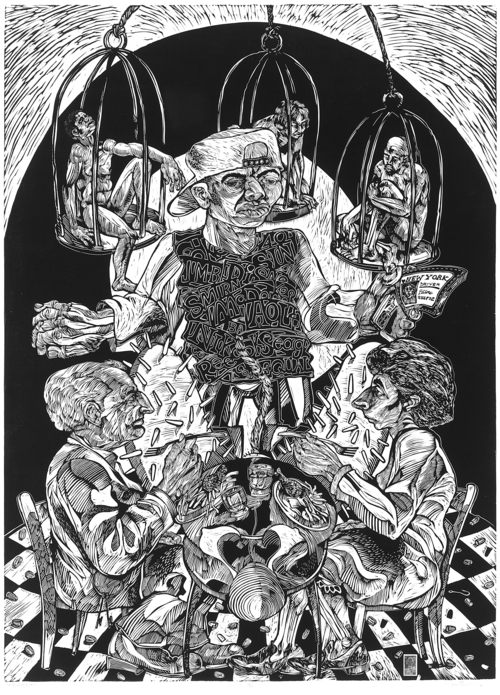 The thesis of my image "Pop, Pop, Pop" is that we as "Americans sit at our pregnant tables overflowing with bounty while people perish in our communities." The table is literally pregnant; the head, breast, and belly make up the tabletop, while the left and right legs are adorned with thorns, which symbolize the pain associated with child birthing. An umbilical cord is connected to the character in the center of the format. The child is a full-grown man who is commodified and adorned with company names that oft times become symbols of exploitation and degradation in depressed communities. The caged people represent the disproportionate amount of African American males and females imprisoned, and stripped of their ability to dream.

The couple sit at their table and appear immune to the societal happenings that has encroached upon their dining room. Thirty-eight bullets litter the floor while the 39th, 40th, and 41st bullet is symbolically translated into the shapes of the jail cells at the top of the composition. The 41 bullets represent the amount of times Amadou Diallo was shot by four police officers in New York in 1999 when he pulled out his wallet; they thought he had a gun.

We must get up from our tables of excess and become active in the lives of people regardless of ethnicity, social status, or creed. I believe we have the tools to alter the systematic demise of our youth globally, which is symbolized by the keys hanging on the side of the male character, and the fishhook on the floor behind the woman. My question: are we 'fishers' of men' from a spiritual sense or 'fishers' of men' from a literal one? 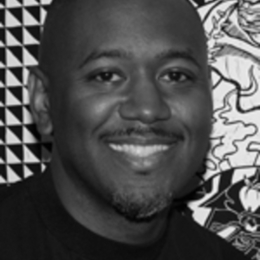 Steve A. Prince is a native of New Orleans, Louisiana and currently resides in Hampton, Virginia. He received his BFA in Fine Arts in 1991 from Xavier University of Louisiana and his MFA in Printmaking and Sculpture from Michigan State University.

I'm Not A Tourist Attraction