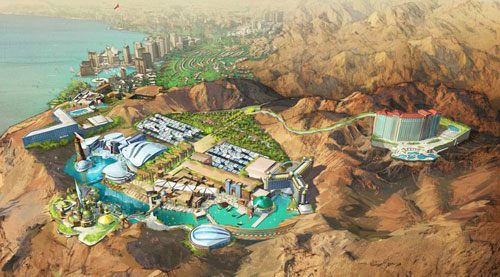 Amid the tumult of the ongoing, not-particularly-seasonal upheavals of the Arab Spring, a little press release last month caused quite a stir among certain quarters of the Western media and the meme-amplifying online world: a planned $1.5 billion development, backed by the king of Jordan, to build a Star Trek theme park at Aqaba on the Red Sea coast.

It's the sort of story we love to pass along. Eccentric ruler of small nation tied to zany development ploy. Even better, Abdullah II is a noted Trekkie (perhaps even to the extent of insisting that the proper name is Trekker) who once, during his princely days, finagled a non-speaking appearance on an episode of the TV series Star Trek: Voyager. You can watch it on YouTube, his royal highness's four seconds of futuristic fame, as he stands aglow in the jumpsuit-unitard-uniform of a Starfleet ensign.

The Voyager cameo was hardly the first or most significant of the Hashemite royal family's brushes with Hollywood. His father King Hussein received special thanks in the credits of Indiana Jones and the Last Crusade for allowing the ancient city of Petra to be recast as a mystical Crusader fortress. His mother, Muna al-Hussein (née Antoinette Avril Gardiner) was a secretarial assistant on the set of Lawrence of Arabia, which the king was wont to visit from time to time. "The two met at a fancy dress party," explains the Telegraph obituary of Hussein's English father-in-law, "which the King attended in a pirate's outfit."

Hussein's great-grandfather Hussein bin Ali was played by Omar Sharif in the movie; his great-uncle Faisal by Alec Guinness. His grandfather, Abdullah I, wrote himself out of the movie by not getting along well with Lawrence in the first place.

The setting for the putative theme park, the little town of Aqaba on the brief and barren Jordanian coast, had its own role in the movie, and the original, as the site of a decisive raid by the Arab freedom-fighters on the town's Ottoman garrison. The Turks withdrew, never to return, and in due time much of the modern Arab world came into being. It's hard to forget this, looking at the Aqaba skyline, because said skyline is dwarfed by a gargantuan pole flying a 60-by-30-metre edition of the Flag of the Arabian Revolution.

From 2003 to 2008 this pole was, at 132m, the tallest in the world. It has since been thrice surpassed by poles in Turkmenistan (133m), Azerbaijan (160m), and Tajikstan (162m). A 200m mega-monstrosity under construction in Dubai will soon bring the distinction back home from Central Asia. The real winner in the ever-taller tale of national ambition, though, is Trident Support, the San Diego company that makes all of the mega-poles.

Having lost the tallest flagpole, Aqaba and Jordan may soon have the world's only officially-licensed Star Trek theme attraction—the Las Vegas-based Star Trek: The Experience shut down in 2008. I actually visited the latter one in 2000, during one of the last paroxysms of the dot-com boom. It was, I suppose, an experience, but then again how could it not have been? All I recall of it now are a few memories of blinking lights, the smell of fog-machine smoke, and standing in line with management consultants in their ironic T-shirts.

Despite the hours spent in my youth watching the various series, I've never been the best Star Trek fan: I know far too much to claim actual indifference to the series and its world, but it also probably tells you something that my favourite work by far in the oeuvre is Star Trek IV, the one where Kirk and co. travel back in time to early-1990s San Francisco and ride around on city buses. That world felt so much richer and more familiar, and yet more strange than any of the planets Starfleet officers ever beamed down to before or since.

A Star Trek theme park popping up on a desert coastline in Arabia can seem like some sort of a last-ditch ploy—royal or otherwise—to make Jordan more interesting. For me, at least, it's Jordan that winds up making Star Trek more interesting.

With that in mind, let's quote the Astrarium press release, shall we?

Capturing the rich history of the surrounding area, this wondrous attraction draws from Nabatean, Babylonian, British and Roman influences to provide an incomparable adventure. With an impressive array of technologically advanced attractions, five-star accommodations, captivating theatrical productions, nighttime spectacles and unique dining and shopping, The Red Sea Astrarium offers something for everyone.

To complete the chronological spectrum with a futurist perspective, RGH has joined with CBS Consumer Products and Paramount Recreation to create a stunning Star Trek-themed center that will deliver a variety of multi-sensory 23rd-century experiences, culminating with a state-of-the art space-flight adventure that takes real-time immersive entertainment experiences to bold new heights.

The Babylonians, the British, and Starfleet: what's not to love? In assigning me this article (yes, it was assigned—the real world is so much more astonishing than any science fiction!), my editor wryly noted the irony of a Middle Eastern monarchy taking such interest in the 1960s political utopianism of Star Trek creator Gene Roddenberry. But I find it more tempting to read this as a single political arc, from the Code of Hammurabi—if you accidentally flood your neighbour's field, pay for the damages—all the way down to the Prime Directive—don't mess with other people's worlds. Might that be the bit that the King finds most apropos this seemingly never-ending Arab Spring?

We apologise for the fault in the subtitles. Those responsible have been sacked.

Insatiable curiosity, and a love of convergence, connection, and cross-cultural coincidence.