Throughout the 1990s, we had often spoken about the need for a Christian think tank—one that could help Christians in any vocation make better decisions—but my parents specifically founded IGE because Christians were too often a part of the problem—through ignorance or arrogance, the methodology of engagement betrayed the respect and love of the Message.

Comment: Can you tell us a story about how you originally came to have a passion for engaging global politics and religious freedom?

Chris Seiple: I've known since I can remember that I would be doing something internationally focused. To work in religious freedom didn't occur to me until my father (Bob Seiple, the first U.S. Ambassador-at-Large for International Religious Freedom) asked me to join the Institute for Global Engagement (IGE). Throughout the 1990s, we had often spoken about the need for a Christian think tank—one that could help Christians in any vocation make better decisions—but my parents specifically founded IGE in response to two facets of my father's experience at the State Department. First, no one knew how to operationalize, or promote, religious freedom in a practical manner. Everyone was good at pointing the finger and trying to get someone out of jail (which is, of course, important), but no one was trying to work with authoritarian governments to transform the environment so that people of faith didn't go to jail in the first place. Second, it was my parents' experience that Christians were too often a part of the problem—through ignorance or arrogance, the methodology of engagement betrayed the respect and love of the Message.

I came to IGE with a national security background. Like most people, I saw the issue of religious freedom according to my own professional and personal experiences. It was not an easy fit. Then 9/11 happened, and it was clear that religious freedom had an important role to play in national and global security. At IGE, we define religious freedom broadly—it is not only the right to choose, not choose, or share faith freely, but it is also fundamentally the requirement to respect, and be reconciled with, the other. As a Christian, this is where my passion for religious freedom comes from. For me to be whole, my identity must be rooted in the "other," my neighbour. It is incumbent upon the Christian to find the language and logic to love neighbours in a manner they understand. Otherwise, it is not love.

Comment: Our experience of global politics is often of its profound brokenness, and the seeming intractability of human conflict. What are the practices or experiences from which you draw hope and inspiration in your work?

CS: Our work in Vietnam is a practical example of blending hard and soft power—which will also be detailed in a case study for our forthcoming book on religious freedom advocacy (Baylor University Press, 2009). The very short version: we had invested in relationships in Vietnam at the national and provincial levels. When it was designated as a "country of particular concern" by the U.S. State Department for religious freedom violations, we offered to work alongside the Vietnamese government in the positive work it was already doing, and tell Americans about that progress. Today, we are the only religious freedom NGO allowed into the Central and Northwest Highlands with a signed agreement to work with the government in providing religious freedom training seminars to religious leaders and government officials at the provincial level. There is much work to be done, but I am optimistic about our partnership with the Vietnamese, as well as the model it presents for application elsewhere in the world.

Comment: You're an advocate of what's called "relational diplomacy". What does that mean? When has this approach borne fruit?

CS: Yes, we coined that phrase a few years back. Christianity Today asked me this question in 2007 and the spontaneous answer I gave then is still pretty good. That said, I think there are two other key characteristics. First, relational diplomacy is about simultaneously building relationships from the top-down (governments) and the bottom-up (grassroots). Second, relational diplomacy is also about operating at the nexus of the public and private spheres (at either the governmental or grassroots levels), blending the traditional "track one" diplomacy of governments and the people-to-people diplomacy of "track two." In other words, relational diplomacy is "track 1.5" diplomacy, operating in a multi-nodal world of state and non-state actors while building and deepening relationships across, between and among the nodes to positive, practical and persevering effect. Again, Vietnam is one place where this approach has brought forth fruit.

Comment: You've talked about the new year being a crossroads, a chance for America to "re-boot" its image, influence and impact around the world. With change on everyone's minds, give us some examples of the kind of change you are hoping, working and praying toward this year?

CS: The new "change" in U.S. foreign policy is the exercise of "smart power" through the application of diplomacy, development, and defence. The problem with this premise—and it's a good premise—is that American officials have not been trained, let alone educated, to think about how these three D's relate to each other. (The same, by the way, is true for the private sector.) In the name of professional and academic specialization, we have removed our "experts" from relevance because they often cannot relate their specialties to the bigger picture in a manner that provides for both good policy and good practice. I wrote on this several years ago but unfortunately I think my conclusions remain the same today (please see my May 20, 2003 piece in Government Executive).

In other words, if we want to see true change come about, we need better-trained and educated professionals who can think and act in integrated fashion—from the State Department to the intelligence community to program officers at a philanthropic foundation to the business leaders trying to open new markets. Without a change in education, we will merely develop new slogans to swat at the symptoms of very old problems.

Comment: If our readers want to deepen their understanding about religious freedom and international politics, what would you recommend they look at, listen to, read, or do - in addition to visiting the Institute for Global Engagement (and ordering your Review of Faith and International Affairs)?

CS: Tom Farr and Alan Hertzke have good books on religious freedom. IGE will soon be releasing a religious freedom policy brief, the result of three symposia we held last year with Georgetown that examined the history, impact, and future of the 1998 International Religious Freedom Act.

Most of all, however, I would encourage Comment readers to first become engaged locally. Be intentional about getting to know someone who doesn't look or vote like you. Understand how they understand respect. Walk in their shoes. And realize that God loves that person as much as he does you. 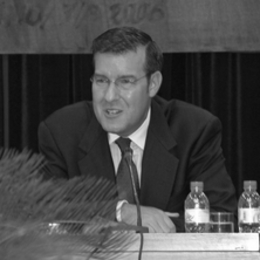 Dr. Chris Seiple is the president of the Institute for Global Engagement, a faith-based NGO that promotes religious freedom worldwide. A graduate of Stanford, the Naval Postgraduate School, and the Fletcher School for Law & Diplomacy, he is also the founder of The Review of Faith & International Affairs, a Senior Fellow at the Foreign Policy Research Institute in Philadelphia, a member at the Council on Foreign Relations in New York, and a member of the International Institute for Strategic Studies in London. His book, The U.S. Military/NGO Relationship in Humanitarian Interventions, is a seminal work in the field, and he is the co-author of the forthcoming International Religious Freedom: A Handbook for Advocacy. A former Marine infantry officer, Seiple serves on the Wycliffe Bible Translators, USA, board of directors, and also on the board of advisors for Carolina for Kibera, Inc.