I work at serious and sustained conversation with religious people. This way of exploring the pathways of meaning has resulted in teaching, writing and museum exhibitions—all born of story, and the deep desire we have as human beings for a meaningful life.

David J. Goa: I have a granddaughter who is now your age. Shortly after she learned to talk, she spent a hot summer afternoon playing inside. Her father came home, found her in the living room, knelt down, and asked her if she would like to go outside and play in the balmy sunshine. She said, "Yes."

"Well, you will have to put your clothes on, then," her father said. (She had spent the day playing in her diaper, as little children sometimes do.)

I have spent my life seeking to understand how we who are the faithful learn to see and understand, through religious tradition, what is being asked of us by the ideas that "clothe" each cultural epoch. I work at serious and sustained conversation with religious people—women and men and children—thinking with them about how we understand the stories of religious tradition. How do these treasured stories speak about the meaning life has, or ought to have? How do they speak about the human struggles that form so much of modern culture? How do we come to live faithful and grace-filled lives? The result of this way of exploring the pathways of meaning has been my teaching, writing and museum exhibitions. All of them are born of story and the deep desire we have as human beings for a meaningful life.

DJG: We don't know who said it first, but a number of scholars many times over the last four decades have said, "Tradition is the living faith of the dead. Traditionalism is the dead faith of the living." I was raised in the narrative landscape of the Bible. These narratives provided us with everyday ways of engaging meaning and shedding light on our experience of struggle and joy—both that which gave life and that which threatened to deal death.

From an early age, I was fascinated by how those I knew and strangers I met knit together the meaning of their life from what they had received (the living faith of the dead) and what they were dealt by the challenges of modern life. The range of questions that began to form in my mind in my early teens circled around tradition and modernity, and by the time I was in my early twenties the die was cast: I would spend my life thinking about and seeking to understand what was happening to the human spirit in the brief time that I was given. I was a student of Socrates and sought to be a disciple of Jesus. The teacher and model of compassion, the rabbi from Nazareth, invited and encouraged me to seek to do what I loved in life-giving ways. There is no spiritual or intellectual art for art's sake. It is all in service to the life of the world, however modest it may be.

DJG: Rarely is anything we do as important as we think. Rarer still are the mistakes we make held against us. If you stay focused and seek to be faithful in life-giving ways to those things that you steward, you will be amazed at how often they succeed, particularly in those institutions that normally do not claim to value what you do. That being said, there is no substitute for being as wily as a serpent and as cunning as a fox.

DJG: In the 1950s, on Queen Victoria's Day, I would join my father planting the garden. At some point, I was planting small carrot seeds down a row while my father came from the other direction along another row doing the same. When we met (it happened virtually every year) he would stop and say, "Sonny boy, unless you enter the ground and die, just like the carrot seed, you will not be able to enter the kingdom of God." There was little explanation and little needed. I had learned by teaching and example that ambition is the catafalque of aspiration. And, all of our God-given aspiration is only for that which draws life from death. I have often wondered about how hard it was for my father to say this to me since he knew well its implications. It countered all the ambition parents attach to their children in this world of shades.

DJG: Two sources are obvious. First is the story of Joseph and his brothers, and the sojourn of the favoured son of Jacob in the land of the dead—Egypt. Joseph found himself before Pharaoh, through a journey down and out, from pit to pit, prison to prison. He was asked to interpret Pharaoh's dream. This is the dream of all those who hold power at whatever level, grand or modest, in institutions larger or small, public or private. Each of us, in our particular way, is faced with this spiritual challenge and opportunity throughout our life. We all live in the land of the dead. Each of us is Joseph before Pharaoh. This is a story about the human vocation, our alertness to what is asked of us, and a recognition that those who hold power have dreams they do not and often cannot understand, which await interpretation. Often, in the act of interpretation, we may turn what could become a nightmare into a time of harvest and preparation for the famine that is to come. From tears come laughter; from the pit, the courtyard; from ashes, beauty. Such is the way of the cross, and for this sole reason we have no need for ambition.

My second inspiration has always come, over and over again, from the minds and hearts of those who became my spiritual friends, whose beautiful faces I was blessed to glimpse. We are called always and everywhere to spiritual friendship, for the sake of our own salvation, and it is the gift of the Spirit that makes all things whole. In and through it we are moved above our self interest, above what we thought we were doing, to glimpse for a time the kingdom that is without end.

DJG: The first waking moments of my day, usually around 5:00 a.m., begin with the lenten prayer of St. Ephrem the Syrian:

O Lord and Master of my life, a spirit of idleness, curiosity, ambition, and idle talk give me not.

But a spirit of chastity, humility, patience and love, bestow upon me Thy servant.

Yea, O Lord King, grant me to see mine own failings and not to condemn my brother or sister, for blessed art Thou unto the ages of ages. Amen.

I give the initial hours of the day, usually until 11:00 a.m., to the more contemplative parts of my work, thinking and writing, those things that require space and silence.

DJG: Story—your story, my story, our story. Stories provide the way toward conviviality. In the presence of story, the world is made new because we are changed.

DJG: I don't know how rare my pathway has been. One of its singular gifts has been to only work on those things that I either love or have come to love. Doctors largely work on disease. Sociologists seek to map and sometimes analysis various forms of social pathology. I have known biblical scholars both within universities and seminaries that have spent their scholarly life dissecting this or that aspect of the Scriptures all in an attempt to come to terms with their adolescent battle with their father over questions of authority. We can all too easily spend our life looking at our own wounds or that of the church or culture. It is a dangerous occupation when it covers up the deep vocation of the human nature for service and bringing divine love into a fragile and struggling world. I have been delighted by virtually all of my work in the fields of meaning.

DJG: The value of vigorous planning is to create the confidence necessary to set the plans aside when "the surprised delight of what we didn't know we knew" comes to greet us. All creativity, from art to management, requires the diligent practice of particular crafts. But craft is never enough, or the point, or the goal. Craft prepares us for the gift of the divine energy that holds the world together, which most of us are unable to welcome except through the diligent practice of the craft. We cannot make the good, the true or the beautiful, but our service to the craft may prepare room to welcome these three sisters, for life-giving work nurtured by our spirit of hospitality.

DJG: For better or for worse, they have been of a piece, for me. 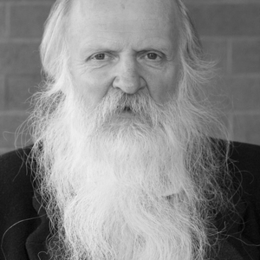 Dr. David J. Goa has curated the U Encounter Online Exhibition and Anno Domini: Jesus Through the Centuries, a public exhibit and book in collaboration with Jaroslov Pelikan. He was the founding director of the Chester Ronning Centre for the Study of Religion and Public Life, at the University of Alberta (Augustana Campus), the first such centre at a Canadian public university. Over three decades, he developed the program for the study of culture at the Royal Alberta Museum in Edmonton. His most recent book is The Christian Responsibility to Muslims (2015).