I help the people who help people on the margins of society, especially in cities.

Josh Good: I work with leaders of social programs who help people on the margins of society, especially in cities. But my teammates and I mostly focus on helping the people who help people, by providing site leaders with key tools to improve their marriage programs, fatherhood programs and prisoner re-entry initiatives. Typically another colleague and I will spend a couple of days fully immersed in a local program's work, and then follow-up in writing, via phone calls, and through a variety of other ways to make sure site leaders have all the tools they need to be successful—and that they meet their core benchmarks.

JG: Ultimately, it came from listening to what was needed, and asking how my God-given talents might help fill the gap. As a graduate student, I interned at the U.S. Department of Labor (DOL), shortly after President Bush had installed faith-based offices in many of the cabinet-level agencies. At the DOL, many urban pastors were telling federal officials there that they were seeing lots of young men returning from prison to their church pews—and they needed better direction and resources to help them steer clear of crime. Sadly, national statistics showed that two out of three ex-prisoners were re-arrested within three years, and over half were re-incarcerated. Many pastors felt this just wasn't right, and they asked the state to play a larger role to help remedy the problem. Ultimately, DOL leadership decided to work alongside these community organizations and faith-based groups, to help a core group of non-violent, non-sexual felony offenders in concrete ways.

After some internal politicking and collaboration with the U.S. Department of Justice and with a private foundation, a $27 million, three-year initiative was born. The program was called Ready4Work, and it partnered with seventeen faith-based sites throughout the country. As part of the original proposal team, my job was to make sure a core group of the faith-based grantees met their essential commitments. Over regular site visits and weekly correspondence, my colleagues and I worked to equip them with various data-oriented tools and other resources to help them more effectively help fourteen to thirty-four-year-old men (and some women) find work, pair themselves with a mentor, and reconnect to a healthy social community. While it didn't always work, our program cut the recidivism rate at six months and one year by more than half—convincing me that with smart program design, committed individuals, and the strengths of these grassroots faith-based and community organizations, major improvements are possible.

Since the data suggests that healthy marriages are a critical ingredient for healthy child development, I am now focusing primarily on programs that help new married couples, as well as other programs that serve at-risk fathers and families in high-risk communities.

JG: During my first job after college, I worked as an assistant for a think tank president who had been an Assistant Secretary of State for more than seven years at the U.S. Department of State—so there was a lot to learn. One morning, my boss invited me to come along to hear him testify before a U.S. Senate panel, which would mean leaving at 10:30 a.m. for an 11 o'clock testimony. At 10:31, Elliott came by my office, where I was still gathering my belongings. He waited a moment or two, and then, realizing I wasn't ready, headed for the door. I had to drop my briefcase and run, just to catch him on the street. The lesson was simple, for a budding newcomer to Washington: be on time, or be left behind. Respect other people's time, and you'll earn their respect, too.

One other learning experience: many of the most accomplished people I met in Washington often used stories, rather than offering direct advice or firsthand confrontations, in passing along personal counsel. The underlying idea, as best I could understand it, is that those looking for direction should be able to find it—but, much like those who heard Jesus' parables, they should listen for it, rather than be handed it directly. In this way, the listener's "freedom" is affirmed by the storyteller, whose stories—sometimes with a sting in the tail, sometimes with encouragement—help give needed direction.

JG: It's hard to choose just one, so I'll quickly offer three.

JG: A number of years ago, I had a 35-minute commute by car to a think tank in the Washington, DC area. On the advice of a mentor, I listened to an audio-book reading of the four Gospels or the Book of Acts en route to the office, and often on the way home. I'd been challenged to "listen not just to his words (though surely they matter), but listen to the way Jesus interacts with people"—his disciples, the Pharisees, nearby sinners, enemies and many others. That discipline was a life-giving experience, in helping me better appreciate Christ's person-specific focus on individual repentance and faith, as well as other core values.

On a similar note, I've tried to choose new jobs and close friendships that place me—and now my wife and me both—in close proximity to people we'd like to emulate. If we have friends and colleagues who routinely bring out our best angels, and challenge our worst ones, 'tis all for the better.

JG: A year ago I began riding with the Harvard Cycling Team 2-3 times a week, and it's been a breakthrough of sorts to witness the impact of doing so, on both writing and other work. Many people say the right combination of sleep and diet are enough for them. And while those things—and relationships being "whole"—also matter, for me exercise is often tied to productivity, whether swimming, running, playing soccer or tennis, or cycling. Early in the morning is best.

Otherwise, I try to do the most challenging projects first—the task I'm slowest to want to take on, whether writing, expense reports, or the unusually hard-to-craft letter to a site that's sorely missing their benchmarks. This saves the afternoon for correspondence and other "lighter" projects.

JG: Several years ago, my former boss told me he thinks that, in terms of productivity, the BlackBerry is the most important invention since the fax machine—and I think that's right. People joke about being easily addicted ("they don't call it crackberry for nothing"), but especially in the context of traveling, it helps make it possible to stay "current."

JG: For three years, I worked closely with an ex-prisoner re-entry site in Chicago that was routinely going about its work in an inspiring way. Their team was hardworking, they had partnered with five faith-based congregations throughout the city, and they took my input and feedback seriously. Both personally and professionally, they were a delight to work with. During the program's second year, the site director invited me to give a keynote address during a graduation ceremony for former prisoners who had successfully completed at least eight months in the re-entry program. Doing so was one of the true privileges of my professional career to date. I can still see the smiling faces of those eighteen men, many of whom made very difficult choices to "stay on the straight and narrow" over these many weeks of job-training programs, mentoring meetings, and placement into apprenticeship programs or jobs. Many families also came out to support their sons or husbands or fathers, and I understand that today the site is still in touch with many of these men, now several years later.

JG: My wife often reminds me I need to do more of this, using Stephen Covey's framework. I do keep lists of top priorities, and mostly work to "stay as current as possible," with e-mail requests, core responsibilities, and taking on new assignments. Aside from the general principle of trying to take on the toughest projects in the morning, reserving easier assignments for the afternoon or evening, I try to stay as fluid and available as possible—to be "free" for the things that really matter, which include playing soccer with local kids, and joining my wife for dinner and dishwashing.

JG: I'm not paid like an investment banker, but I truly love what I do. It's inspiring to go visit job-training counselors, marriage curriculum facilitators, volunteer mentors for ex-prisoners, and others committed to helping some of the "toughest to serve" populations. Talking with formerly incarcerated individuals or dads wanting to reconnect with their children makes me truly grateful for the material blessings I have, as well as the opportunity to be in this line of work. Learning to love the poor—and help draw out their humanity, if it's been stamped down—is its own form of grace. Often it calls to mind the famous phrase from one of the early church fathers, Irenaeus of Lyons: "the glory of God is the human person fully alive." Helping broken-hearted people rediscover this profound truth is a quiet reminder that the task is worth pursuing personally, too. 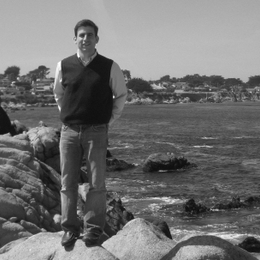 Josh Good is a Manager for ICF International, a consulting firm headquartered in Fairfax, VA. He works primarily with faith-based and community organizations that are currently partnering with the federal government, especially in the areas of marriage programming, fatherhood programming, and prisoner reentry initiatives.

Activism, Justice, and Longing for Shalom

I care about justice; must I be an activist?