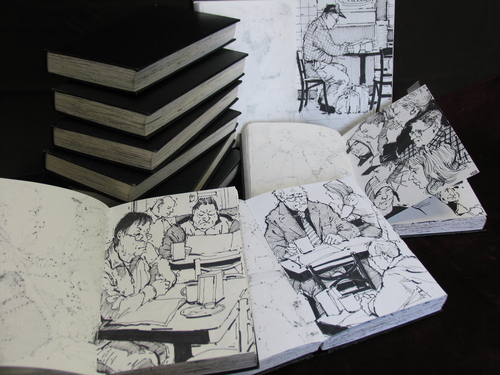 It's early Monday morning and very dark on British Columbia's Pacific west coast. I'm in the lineup for the 5:45 am ferry from Gabriola Island to Nanaimo. About half an hour later I am nursing a steaming hot coffee and a favourite muffin at Tim Hortons. Even though I have become a minor celebrity there over the past ten years, I am still able to draw rather anonymously in my quiet corner, at least for the next couple of hours. They are my coffee shop people—real people in real time. I am currently working on volume 14 of my coffee shop people sketchbooks. Darrell, an employee, stops to chat about his dreams of becoming a writer. Last week a friendly local showed me his photographs of scale model logging trucks he's been carving out of wood for many years. Impressive. One little girl asked her mother if she could ask me to send her one of my drawings. I did. She lives near Port Hardy on the northern tip of Vancouver Island. When Tim Hortons celebrated its 40th anniversary a few years ago, I was selected with 8 other Canadians to be featured coast-to-coast on all their donut boxes, cups, newsletters, and other print material. Quite the honour no doubt. Some even asked for my autograph on a donut box. It wasn't quite the same as the Sistine Chapel or the Metropolitan Museum of Art. But I still have time.

My point in all this is simple. Regardless of one's pursuit for fame, fortune, and fulfillment (fulfillment being the best choice), it's mandatory to stay in touch with real people in real time. I can share ad infinitum about the perils of being an artist. The long solitary hours and years in the studio. The quips of those who insist you "get a real job." There's the overwhelming presence of decorative arts, the Sunday painters and retired professionals who want to have a go at art. Having mastered the fine art of drawing, and still learning, I embarked on the difficult journey of changing from realism to abstract. It has taken fifteen years and it was tough. Still is. One friend wanders into my studio and sees a realistic drawing on an easel and an abstract canvas on the wall. "That's art," he points ( guess which? ), "and that's not!" He's still a dear friend.

But, "if I may boast," to quote a fellow sojourner, I do have some accomplishments to be thankful for. After 44 years, since I first enrolled as an art student at the Ontario College of Art & Design in Toronto, I have been able to master the fine art of drawing to a degree my peers recognize me as a Canadian drawing master. I have also mastered the human form from "life" (that's the less provocative term for drawing from the nude or naked model), male and female, to the extent that my expanding vocabulary of formative imagery enables me to draw the human form from memory. In the 15th century one of the most renowned drawing media was silverpoint, that mysterious discipline of drawing, which when completed, continued to mature or tarnish long after the drawing was done. I mastered that too and have been spellbound by experiments with silverpoint far beyond its original intentions.

As founder of the Drawing Society of Canada and the Canadian Academy of Drawing online, I have become an advocate, champion of you wish, for the cause of drawing, its preservation, its education and its determination to stand tall next to drawing's noisy sibling—painting. Yet, there is a risk. I am tempted to become too philosophical about art, too "ivory-tower-ish," (oops, I meant conceptual, minimalist, deconstructionist) and before I know it, I crave for the human touch of real people. So, I leave the tower studio and catch the ferry.

Of course there are the critics who cannot reconcile the fact that I am an ordained pastor and teacher of the Kingdom of God. Have been for 27 years. I am also a published poet, author, husband, father, grandfather, and among our island's youth at The Hope Centre, I am "the pancake man." That's enough boasting.

Faith is staying in touch with real truth in real time—the foundations of the Kingdom of God with which we undergird the everyday real activities and events of an everyday real life. Art is one of the few remaining languages that cuts across cultural barriers and is still permitted to cross borders in the ever diminishing world of evangelistic outreach. Borders are closing, but art reaches far and beyond. So, I continue to draw, teach and reach, through my international art students.

I remain humbled by the voice in art I have been given. Some of it I had to earn the hard way. Nevertheless, it touches real people in real time in many countries, some of whom have become accomplished artists. And if I may close with a bone of contention, there is no such thing as "Christian art or Christian artists." Religious art? Yes. And I do make the distinction. Christian is an adjective that belongs to people and not to the things we have and do. An artist, who had been attending our weekly life drawing sessions in a space donated by a local pub owner, said, "hey, aren't you the pastor who draws naked people in the basement of a pub?" I thought, "Oh my God! Hope head office didn't hear that." But then, I remembered how thankful I am to be independent as artist and minister, dependent only on the leading of God's spirit, His Word, and the fellowship of real people in real time. 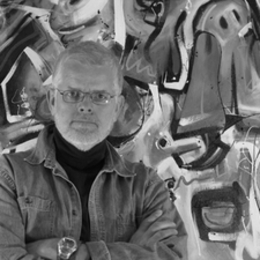 Gerrit Verstraete, AOCA, BFA, is an artist in his Masterpeace Fine Art Studio and founder of the Drawing Society of Canada. He lives on Gabriola Island, BC, where he co-pastors with his wife in the Church On The Rock, a fellowship they began in 1993. Visit www.gverstraete.com and www.backtoschoolat65.blogspot.com.

I have been passionate about fine art for over 45 years, including both classical and contemporary traditions, ever since first enrolling as a young student at art college. Little did I know I'd have to account for that journey in light of the Kingdom of God, when I was called into fulltime ministry. Hasn't been easy, especially since my 'major' form has been figurative realism, despite abstract variations. But then, locally, among the children at the Hope Centre here on Gabriola Island, I am known as 'the pancake man,' because I make awesome pancakes. Now that's a reputation worth remembering.