The profound rejoicing that is happening in the city when the righteous prosper occurs as the curse is pushed back and the virtues of the Kingdom are pushed in.

This article is an adaptation of Dr. Sherman's commencement address at Messiah College in May 2011.

This is a deeply special day and I am honoured to be a part of it. I want to offer my gratitude to President Phipps and Messiah's leadership for this privilege. And I certainly offer my congratulations to each of you graduates and to your parents and family members who have supported you during this journey called college.

In preparing for this talk I noticed a wonderful sentence on Messiah's website. It read: "We hone our gifts, because the more capable we become, the more powerfully we serve."

That is a wonderful line. It captures succinctly two fundamental truths about life in Christ: 1) that we have been blessed (we have gifts and the opportunities to hone them), and 2) that the purpose of that blessing is service. This sentence resonated with me deeply because of the work I've been doing in the past few years on a new book. That work began when I started excavating a little verse in Proverbs, which has since become a very precious text for me. I'd like to linger over this little text a bit today, for I think it reflects so well the mission of this institution and offers to each of you graduates a challenging, robust, and joyful vision of what can come next in life for you.

The verse is Proverbs 11:10 and it says, "When the righteous prosper, the city rejoices."

My favorite preacher, Tim Keller, notes that this verse should seem somewhat counter-intuitive to us at first glance. After all, it says that there is a city, and in this city there is one group of people who are prospering. They enjoy great blessing—they have assets, power, opportunities, and position, and wealth, and talent. They are prospering, flourishing in every way. And the verse says that as this group prospers, everyone is happy about it. The whole city rejoices over it.

Now that is counter-intuitive. Can't you easily imagine a more plausible scenario marked by jealousy and resentment? Isn't it more likely the people at the bottom of the city would be saying, "Here we go again, the rich just keep getting richer," rather than singing hallelujah over the increasing fortunes of the people at the top?

What makes the verse sensible is that the group that is prospering is "the righteous." The Hebrew word there is tsaddiqim. The tsaddiqim, the righteous, are defined as those who are so in love with God and His Kingdom that they steward everything they have been given—their assets, their social position, their vocational skills, their power, their gifts, their prosperity—not for self-enrichment, not for the purpose of self-aggrandizement, but for the common good. They steward all the dimensions of their prosperity for the purposes of shalom, for the purposes of advancing God's justice and goodness. And when the people at the top of the city—the people with influence and opportunities and talents and power—act like this, then of course the whole city rejoices. The people at the bottom rejoice because they benefit. By the way the tsaddiqim steward their gifts, they make life better for everyone.

"When the righteous prosper, the city rejoices."

Now, the word "rejoice" in this little verse is also very important. It's a unique term, used only one other time in the Old Testament. It has almost military connotations in that it denotes the ecstatic rejoicing and celebrating that a small people do when they achieve an unlikely victory against their enemies. It describes the exultation that people express when they have been delivered from the hand of their oppressors.

So "rejoice" here is a big, robust word. This is deep, passionate rejoicing—not the rejoicing of "happy birthday party" but VE-Day rejoicing; dancing in the streets of Paris rejoicing; the "war is over and we won" rejoicing.

By this we realize that the righteous, the tsaddiqim, in their prospering, are making a very significant, noticeable impact on their city—for only this could prompt such extreme rejoicing. They are stewarding their gifts and talents in ways that are bringing about such deep, substantial, positive transformation in the city that the people are going wild with gladness and gratitude. Clearly this is not a case of the righteous taking their used clothes over to the Salvation Army Thrift Store and the poor people of the city finding them there and being so happy to get a $200 dress for $5 bucks. No, this is the righteous advancing justice and shalom in their community in such a way that the people at the bottom stop being oppressed, and start having real opportunity—where everyone is starting to experience more safety, more wholeness, more hope, more peace, more community.

Indeed, the profound rejoicing that is happening in the city when the righteous prosper is a result of nothing less than foretastes of the Kingdom of God coming into reality in the city. This kind of rejoicing occurs as the curse is pushed back and the virtues of the Kingdom are pushed in. When that happens, then the whole city dances and rejoices with abandon.

"When the righteous prosper, the city rejoices."

Graduates, I propose to you today that you are the prospering. Now I realize that at just this moment, you probably don't feel really powerful or prosperous. But just because you are not Bill Gates, and even though you have school loans to pay off, and even though you may fear you won't get a good job right away in this economy, you are the prosperous. Measured against the standards of life many people in this nation—and most people in this world—live by, and relative to those billions in poverty, without occupational choice, without education, you are the prospering—as I am and the rest of your elders here. But the education you have received was not primarily about enabling you to be the prospering—although I believe it has and will enable just that. No. The education you received here was about enabling you to be the tsaddiqim. You have been honing your God-given gifts and opportunities here for the purpose of service, powerful service in this world—for the purpose of rejoicing your neighbourhoods, your community, your world.

One key element of being the tsaddiqim of God is stewarding that aspect of prosperity that is your vocational talent, power, and choice. And in this matter of vocational stewardship, many of the Messiah alumni who have walked this stage before you have shown wonderful creativity and intentionality. I hope you will make it your aim to imitate such imagination and deliberateness.

I think of Melinda Nowak, a 1976 Messiah grad, who is stewarding her vocation as an Administrative Judge to advance principles of restorative justice in the Pennsylvania court system.

I think of Laura Yoder from the class of 1993, who is advancing the Kingdom value of environmental sustainability through her work as a scientist teaching Southeast Asian citizens in natural resource management.

Or consider Andrew Samuel, a business major from the class of 1984. He has founded a bank right here in Harrisburg that has created some 300 jobs and contributed millions to support local economic development. Andrew Samuel has helped to rejoice this city.

Or think about a more recent Messiah alum Jesse Baxter, a 2002 graduate. He is making his living as actor, putting those skills to work in bringing to the stage play scripts written by AIDS orphans in southern Africa.

Lawyers, scientists, bankers, actors—Messiah graduates, all types. As I look out at your beautiful faces, I know I'm seeing future pharmacists and educators, social workers and artists, engineers and linguists, physical therapists and accountants and nurses and political scientists and computer programmers and graphic designers and . . . you fill in the blank.

Many diverse callings, many diverse vocations—but the common thread is that the purpose of all of them is service. The alumni I've mentioned are stewarding their vocational power to advance the virtues of the Kingdom. They are deploying their gifts for the common good. They are living as the tsaddiqim.

And living this way has required intentionality. It has required faithfulness. Living this way requires creativity and imagination and risk and prayer and perseverance. For you see, it is possible to be the prospering without being the tsaddiqim.

It is possible to be the prospering without being the tsaddiqim, because of at least two great temptations.

One is a temptation from our culture: It is the temptation of coming to believe that richness of having leads to richness of being, rather than the other way around. It is the danger of giving far too much weight to the material over the spiritual.

The second is a temptation from within some quarters of our evangelical subculture. It is the temptation of believing that the spiritual is all that matters; that our vocational lives here on this earth really don't count that much since eventually, this world is simply going to burn up. When saving souls and getting a ticket to heaven are all that really matter, then we will not rigorously pursue the question of how to steward our talents for the betterment of life on this earth—for the feeding of the hungry, the releasing of the oppressed, the care of the environment, and the nurturing of a people of shalom. If it's all going to burn up, then our vocations become merely our jobs, a means to make money, to live the comfortable American dream while we count on Jesus to get us into heaven when our souls "fly away."

Thankfully, I believe that you have received during your years at Messiah a grounding in a much more full-orbed Christian world-and-life view, packed with truths that can help you resist both these temptations.

I pray that the Spirit of Christ would work in you powerfully to continue to live by those truths and commitments each day forward. May He enable you to live not merely as the prospering, but as the tsaddiqim. 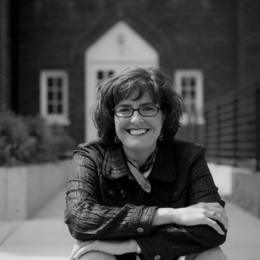 Dr. Amy L. Sherman is a Senior Fellow at the Sagamore Institute, where she directs the Center on Faith in Communities. The Center acts as a "minister to ministries," providing tools and training to community practitioners to advance shalom in their neighborhoods. She is the author of several books and 80-some articles in a variety of religious and secular publications. She authored Kingdom Calling: Vocational Stewardship for the Common Good (InterVarsity Press, 2011).