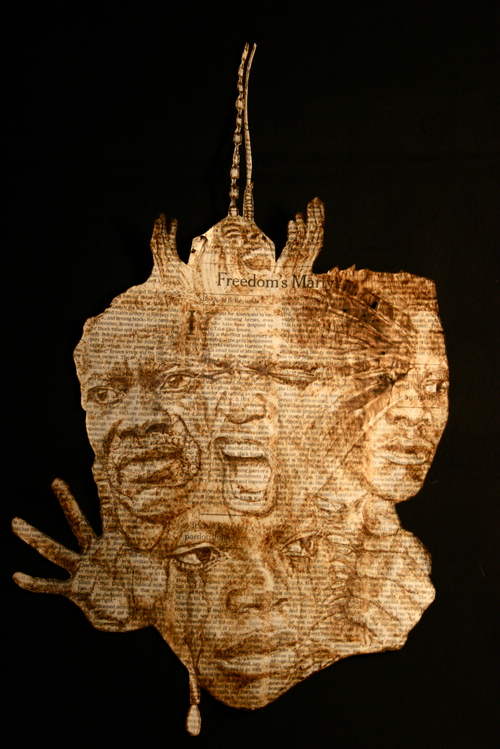 This piece was the first of a new series I started in November 2009. The series consists of several images burned on top of newspaper articles. Each piece is created by slightly burning newspaper until it browns certain areas to reveal an image.

The subject of "Strange Fruit" is based on an anti-lynching poem by Abel Meeropol that was later adapted into a famous song, "Strange Fruit" by Billie Holiday. One of the stanzas in the song reads, "strange fruit hanging from the poplar trees," which is meant to represent the lynchings that had been occurring in America throughout the 20th century. Knowing and understanding the injustice behind the civil rights murders haunted me enough to create a visual depiction of these specific lynchings.

My piece is a visual representation of the oppressed. First, you will notice that the overall shape of the piece is similar to that of an oddly shaped fruit hanging from above by chains and a noose. Second, you may notice that I burned these images into an article from the New York Times about abolitionist John Brown. Third, you may find faces within the burning which are meant to depict the agony of injustice, as a way to remember the atrocities that occurred. And lastly, amidst the burning you will find the face of the victim, Mack Charles Parker, who was lynched in 1959 without anyone ever being arrested for his murder.

Although the piece is dealing with a rather dark subject matter, I believe that God won't ever shy away from suffering. Neither should we. He is faithful in and throughout injustice and allows us the chance to mourn and remember those who have been oppressed. God can redeem any and every injustice, and it is up to us to claim his victory by talking about these events. I have come to learn that man's justice is broken, and often times those who have been wronged by society are forgotten by society. But, God doesn't ever leave us. This piece is meant to represent the truth that He hears the cry of those who are oppressed. Essentially, we all experience suffering, which makes it common ground for everyone to meet on. It is by talking about our suffering that we are able to claim how God has been faithful. I chose to burn these images on top of news articles to establish the importance of these lynchings and reclaim the voices that have been forgotten. The only way to process this oppression is to walk through it with the Lord. My piece was created in hopes that we might walk through the suffering together and in the end speak of the faithfulness of our Lord. 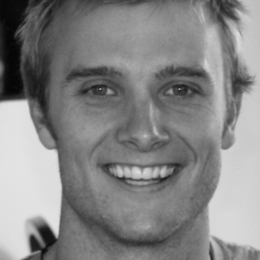 Nolan Lee is passionate about creating art with a purpose. For as long as he can remember, Lee has produced artwork which reflects God and God's heart for justice and redemption. He has a strong desire to inspire those who view his art and to raise a sense of awareness on the subject(s) it interprets. Nolan's artwork has been featured in many exhibitions and shows including the Learn, Promote, Defend international art show in Atlanta, GA, where one of Lee's pieces was chosen as the promotional material.